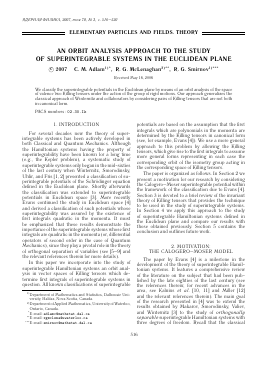 We classify the superintegrable potentials in the Euclidean plane by means of an orbit analysis of the space of valence two Killing tensors under the action of the group of rigid motions. Our approach generalizes the classical approach of Winternitz and collaborators by considering pairs of Killing tensors that are not both in canonical form.

The paper is organized as follows. In Section 2 we present a motivation for our research by considering the Calogero—Moser superintegrable potential within the framework of the classification due to Evans [4]. Section 3 is devoted to a brief review of the invariant theory of Killing tensors that provides the technique to be used in the study of superintegrable systems. In Section 4 we apply this approach to the study of superintegrable Hamiltonian systems defined in the Euclidean plane and compare our results with those obtained previously. Section 5 contains the conclusion and outlines future work.

The paper by Evans [4] is a milestone in the development of the theory of superintegrable Hamil-tonian systems. It features a comprehensive review of the literature on the subject that had been published by the late eighties of the last century (see the references therein; for recent advances in the area, see Kalnins et al. [10, 11] and Miller [12] and the relevant references therein). The main goal of the research presented in [4] was to extend the results obtained by Makarov, Smorodinsky, Valiev, and Winternitz [3] to the study of orthogonally separable superintegrable Hamiltonian systems with three degrees of freedom. Recall that the classical

1967 paper [3] presents a list of superintegrable potentials (given in the standard Cartesian coordinates of the Euclidean space) that separate in spherical, and at least one other orthogonal system of coordinates that, in geometrical language, are determined by the properties of Killing tensors of valence two with integrable eigenvectors. Evans extended the list by considering other combinations of the eleven orthogonal systems of coordinates of the Euclidean space that come from Killing tensors with integrable (surface-forming) eigenvectors, studying in total an impressive number of sixty-six possibilites. Note that Evans has investigated both minimally and maximally superintegrable Hamiltonian systems of this type defined in the Euclidean space. The results presented in [4] have been obtained under the assumption that the Killing tensors that determine the first integrals assume the canonical forms in the sense that "...the symmetry of the separating coordinates is maximized by taking the origin and axes of the Euclidean frames to coincide" (Evans [4], p. 5668).

Now let us turn our attention to the Calogero— Moser Hamiltonian system, obtained in the process of studying a physical model. Its superintegrabil-ity is well-known and understood [13]. Moreover, the Calogero—Moser potential defined in Euclidean space has been extensively studied from the viewpoint of the orthogonal separation of variables [8, 14, 15]. The potential for the natural Hamiltonian in position-momenta coordinates H = 1 (pX + p2 + + Pz) + V(x, y, z) is given by

Different methods have been employed to demonstrate that the potential (1) is maximally superinte-grable. Moreover, it can also be shown that its super-integrability is afforded by a set of five first integrals which are quadratic in the momenta each of which is determined by a Killing two-tensor with integrable eigenvectors. Thus, for example, the techniques from the invariant theory of Killing tensors (see the next section) and the Killing tensor symbolic algebra package based on it have been employed recently in Horwood, McLenaghan, and Smirnov [9] to show that the Calogero—Moser system is orthogonally separable in circular cylindrical, spherical, prolate spheroidal, oblate spheroidal, and parabolic systems. The concise analysis presented in [9] confirms the results obtained earlier in [8, 14, 15] (see also the references therein) by other methods.

Considering the maximally superintegrable potential (1) within the framework of the classification due to Evans, one immediately observes that it does not appear to be a part of it. This is most easily seen by

comparing the set of separable coordinate systems in which the Calogero—Moser potential separates with those sets of separable coordinate systems that correspond to the superintegrable potentials that have been derived in [3] and [4]. Indeed, the Killing tensors of valence two that give rise to the orthogonal systems of coordinates listed above and determine the five first integrals of the superintegrable potential (1) are not in canonical form, since each of the five orthogonal systems is "rotated" with respect to the Cartesian coordinate frame (x, y, z) (see [9] for the details). This observation leads us to an extention of the approach employed in Evans [4]. In essense, we believe that in the problem of the derivation of superintegrable potentials one should consider Killing tensors (or, equivalently, their corresponding orthogonal coordinate systems) in their "general" form rather than "canonical" form.

Our approach can be explained more precisely in terms of the invariant theory of Killing tensors which is very briefly reviewed in the next section.

In summary, the invariant theory of Killing tensors (ITKT) is the study of vector spaces of Killing tensors defined in pseudo-Riemannian manifolds of constant curvature under the action of the corresponding isometry group. The theory is analogous to the classical invariant theory of homogeneous polynomials. Of particular interest, due to its importance in the Hamilton—Jacobi theory of orthogonal separation of variables, is the study of Killing two-tensors with integrable eigenvectors under the action of the isometry group. The most natural framework for such a study is Cartan's equivalence method (see the review by Olver [16], the references therein and Bruce, McLenaghan, and Smirnov [17] for more details). Indeed, in this case one deals with a kind of Cartan geometry, which is the geometry of objects defined in pseudo-Riemannian manifolds determined by the bundle of orthonormal frames on which the corresponding isometry group acts transitively. In this case one can identify the fibres of the bundle with the group of isometries; this is the underlying idea of Cartan's equivelence method (method of moving frames). For the Killing two-tensors with integrable eigenvectors the frame field of normalized eigenvectors defines a prefererred cross section of the bundle of orthonormal frames. Winternitz and Fris [18] (see also the review [19] for more details) were apparently the first to study differential operators under the action of the isometry group. A systematic development of the theory was begun independently in 2002 by McLenaghan, Smirnov, and The [20] who

incorporated the underlying ideas of classical invariant theory (including Cartan's equivalence method) into the study of Killing tensors. Since then much work has been done to develop different aspects of the theory [9, 21-31].