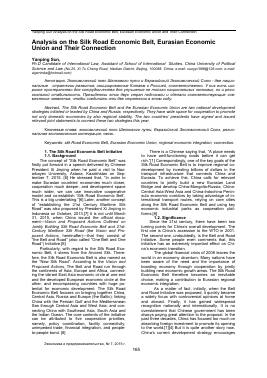 ﻿Analysis on the Silk Road Economic Belt, Eurasian Economic Union and Their Connection

Abstract. The Silk Road Economic Belt and the Eurasian Economic Union are two national development strategies initiated or leaded by China and Russia, respectively. They have wide space for cooperation to promote not only domestic economies by also regional stability. The two countries' presidents have signed and issued relevant joint statements to connect these two strategies this year.

The concept of "Silk Road Economic Belt" was firstly put forward in a speech delivered by Chinese President Xi Jinping when he paid a visit to Naz-arbayev University, Astana, Kazakhstan on September 7, 2015. [6] He stressed that, "In order to make Eurasian countries' economies much closer, cooperation much deeper, and development space much wider, we can use innovative cooperative model and co-establish 'Silk Road Economic Belt'. This is a big undertaking."[6] Later, another concept of "establishing the 21st Century Maritime Silk Road" was also proposed by President Xi Jinping in Indonesia on October, 2013.[7] It is not until March 31, 2015, when China issued the official document—Vision and Proposed Actions Outlined on Jointly Building Silk Road Economic Belt and 21st-century Maritime Silk Road (the Vision and Proposed Actions, hereinafter)—that they consist of "the Belt and Road" (also called "One Belt and One Road") Initiative.[8]

Particularly, with regard to the Silk Road Economic Belt, it stems from the Ancient Silk. Therefore, the Silk Road Economic Belt is also named as the "New Silk Road". According to the Vision and Proposed Actions, The Belt and Road run through the continents of Asia, Europe and Africa, connecting the vibrant East Asia economic circle at one end and the developed European economic circle at the other, and encompassing countries with huge potential for economic development. The Silk Road Economic Belt focuses on bringing together China, Central Asia, Russia and Europe (the Baltic); linking China with the Persian Gulf and the Mediterranean Sea through Central Asia and West Asia; and connecting China with Southeast Asia, South Asia and the Indian Ocean. The core contents of the initiative can be attributed to five cooperation priorities, namely, policy coordination, facility connectivity, unimpeded trade, financial integration, and people-to-people bond. [8]

There is a Chinese saying that, "A place needs to have well-functioning roads before it can get rich."[1] Correspondingly, one of the key goals of the Silk Road Economic Belt is to improve regional co-development by investing billions of dollars in the transport infrastructure that connects China and Eurasia. To achieve this, China calls for relevant countries to jointly build a new Eurasian Land Bridge and develop China-Mongolia-Russia, China-Central Asia-West Asia and China-Indochina Peninsula economic corridors by taking advantage of international transport routes, relying on core cities along the Silk Road Economic Belt and using key economic industrial parks as cooperation platforms.^]

1.2. Significance Since the 21st century, there have been two turning points for China's overall development. The first one is China's accession to the WTO in 2001. The second one, undoubtedly, is the Belt and Road Initiative. Some people even comments that, this initiative has an extremely important effect on China's economic transition.

The global financial crisis of 2008 leaves the world in an economy downturn. Many nations have been aware of the need and the importance of boosting economy through cooperation by jointly building new economic growth areas. The Silk Road Economic Belt therefore becomes an inevitable choice, making a contribution to Eurasian regional economic integration.

As a matter of fact, initially, when the Belt and Road Initiative was proposed, it quickly became a widely focus with controversial opinions at home and abroad. Finally, it has gained widespread recognition nationally and internationally. It is no overstatement that Chinese government has been always paying great attention to the proposal. In the past three decades, China has focused too much on absorbing foreign investment to promote its opening to the world.[1][4] But it is quite another story now. China's current development strategy encourages

domestic capitals to "going out". [41[91 The Belt and Road Initiative has been leveled to China's long-term national strategy. That is to say, for quite a long time in the future, the Belt and Road initiative will be the general strategy for China's comprehensive opening-up policy.

In addition, some western scholars declared that China's behavior in Central Asia resembles the "Marshall Plan".[91[101 As a matter of fact, this assumption is baseless and irresponsible. The Initiative is an ambitious economic vision of the opening-up and cooperation among the countries along the Silk Road Economic Belt. Countries should work in concert and move toward the objectives of mutual benefit and common security. For China, the Silk Road Economic Belt offers plenty of opportunities to expand its influence and to enhance pragmatic cooperation in trade and investment with Eurasian countries. It is a win-win situation.[91 2. Eurasian Economic Union 2.1. Introduction

On May 29, 2014, the Presidents of Russia, Belarus and Kazakhstan signed Treaty on the Eurasian Economic Union (EEU).[21 Since January 1, 2015, the Treaty has come into force and the Union has officially launched. Afterwards, Armenia acceded to the Union on January 2, 2015. Kyrgyzstan has submitted its accession treaty and finished domestic approval process on December 23, 2014, and May 22, 2015. National Assembly of Belarus also approved the accession treaty on July 7, 2015. Russian and Kazakhstan Presidents signed decrees approving Kyrgyzstan's accession on July 14 and 16, 2015, respectively. Generally speaking, Kyrgyzstan's accession treaty will not come into force until it has been ratified by all member states.[21 But it has taken part in the Union since its establishment. By now, EEU has five member states, i.e. Russia, Belarus, Kazakhstan, Armenia and Kyrgyzstan. Tajikistan is a candidate country.

In terms of the personality of Eurasian Economic Union, Article 1 of the Treaty states that, it is an international organization of regional economic integration with the Union.[21 Just as President Nursul-

the idea of building such a trading union in 1994, emphasized that, "we are not creating a political organization; we are forming a purely economic union." Based on this, every member's independence, national sovereignty and territorial integrity should be respected; important decisions concerning the Union are also supposed to be made by members' voting.[21

The Ultimate goal of the Eurasian economic integration, according to President Putin's idea, is to establishing the Eurasian Union- an integrated single market of 176 million people and a gross domestic product of over $4 trillion, and in the future a single currency, which is similar to the Europe Union. In this case, member states are expected to work together to ensure free movement of goods, services, capital and labor within its borders by 2025, as well as coordinated, agreed or common policies in the economic sectors determined under the Treaty and international treaties within the Union. It is also estimated that, by 2030, Eurasian economic integration will bring about an extra $900 billion increment to the GDPs of three EEU members.

As mentioned above, by 2050, the Eurasian Economic Union will achieve free flow of goods, capital, services and people. However, whether this goal will be realized or not is uncertain. In this part, I will explore some challenges that the EEU is facing and will face in the future.

In the first place, since developmental levels in member states varies considerably, particularly Russia and the other four states, import duties allocated to member states differ remarkably. Here I would like to say, the future of the EEU depends largely on Russia's economy status.

Although Belarus and Kazakhstan disagree with leadership of some state(s), their eocnomies developments cannot be separated from Russia's economic strength. It is obvious from the Figure 1 that, before and after the establishment of the EEU, Russia is always the one occupying the majority of import duties.[1]

Figure 1. Import duty allocation to five member states before and after the formal run of the Eurasian Economic Union.

Ulan-Zhu Sayyaf, an economist of Kyrgyzstan commented that, very coin has two sides. He thought the Eurasian Economic Union is confronted with challenges in addition to opportunities.[51 While the Union