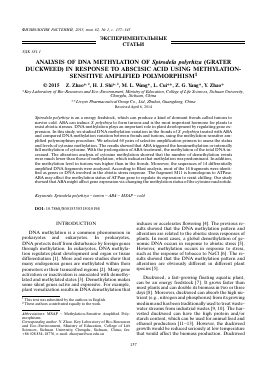 Spirodela polyrhiza is an a energy feedstock, which can produce a kind of dormant fronds called turions to survive cold. ABA can induce S. polyrhiza to form turions and is the most important hormone for plants to resist abiotic stresses. DNA methylation plays an important role in plant development by regulating gene expression. In this study, we studied DNA methylation variation in the fronds of S. polyrhiza treated with ABA and compared DNA methylation variation between fronds and turions, using the methylation-sensitive amplified polymorphism procedure. We selected 60 pairs of selective amplification primers to assess the status and levels of cytosine methylation. The results showed that ABA triggered the hemimethylation or internally full methylation of cytosine. With the prolongation of ABA treatment, the methylation of the total DNA increased. The alteration analysis of cytosine methylation showed that the number of demethylation events were much lower than those of methylation, which indicates that methylation was predominant. In addition, the methylation level in turions was higher than in the fronds. Moreover, the sequences of 14 differentially amplified DNA fragments were analyzed. According to Blast analysis, most of the 14 fragments were identified as genes or DNA involved in the abiotic stress response. The fragment M11 is homologous to ATPase. ABA may affect the methylation status of ATPase gene to regulate its expression to resist chilling. Our study showed that ABA might affect gene expression via changing the methylation status of the cytosine nucleotide.

DNA methylation is a common phenomenon in prokaryotes and eukaryotes. In prokaryotes, DNA protects itself from disturbance by foreign genes through methylation. In eukaryotes, DNA methylation regulates plant development and organ or tissue differentiation [1]. More and more studies show that many endogenous genes are methylated within their promoters or their transcribed regions [2]. Many gene activation or inactivation is associated with demethy-lated and methylated states [3]. Demethylation makes some silent genes active and expressive. For example, plant vernalization results in DNA demethylation that

Duckweed, a fast-growing floating aquatic plant, can be an energy feedstock [7]. It grows faster than most plants and can double its biomass in two or three days [8]. Moreover, duckweed can absorb the high nutrient (e.g., nitrogen and phosphorus) from its growing medium and has been traditionally used to treat wastewater streams from industrial wastes [9, 10]. The harvested duckweed can have the high protein and/or starch content, which can be used for animal feed and ethanol production [11-13]. However, the duckweed growth would be reduced seriously at low temperature that would affect the biomass production. Duckweed

Fig. 1. The morphology of fronds and turions.

is sensitive to the cold. On the other hand, many species of duckweed could produce a kind of dormant fronds called turions to survive cold. The turions could sink to the bottom of the waters, where the organisms could survive even if the top of the water freezes. The turions can be induced by ABA [14]. How will ABA regulate the gene expression of the duckweed to form turions to cope with cold is unclear, especially the role of DNA methylation.

Methylation-sensitive amplified polymorphism (MSAP) is an effective technique in studying the genome methylation status [19]. It is a relatively new modification of the amplified fragment length polymorphism (AFLP) technique, in which the isoschi-zomers Hpall and MspI are employed as 'frequent-cutter' enzymes. Both Hpall and MspI recognize 5'-CCGG-3' but display differential sensitivity to DNA methylation. Briefly, each DNA sample was divided into different fragments with either EcoRI/HpaII or EcoRI/MspI sites. The resulting DNA fragments were ligated with linkers, and then PCR was amplified using primers carrying three additional nucleotides [18].

The objective of this study was to clarify the effects of ABA on the changes in the DNA methylation to verify the possible involvement of genes defending turions against cold.

Plant and the culture. The duckweed Spirodela polyrhiza 1010 was collected from the pond at Sichuan University, Chengdu, China. Turions were obtained under axenic conditions using the method described by Wang [14]. Turions were rinsed gently with sterile water to remove ABA and then cultivated in 250-mL-Erlen-meyer flasks containing 100 mL of the Hoagland E+ nutrient solution under axenic conditions. The beakers were placed in a greenhouse at 25 ± 1°C with a 16/8 h light/dark cycle, with a light intensity of 7000 lx. After 7 days of cultivation, the first frond generated by turions was selected for the initial materials (fig. 1). In order to maintain the same growth state, the same size fronds were selected. Five fronds were aseptically transplanted into Hoagland E+ solution with 1% sucrose at pH 5.8. The experimental environment was the same as before. After 3 days of cultivation, 1 ^M ABA was added. The fronds were collected from a time of 0 (no ABA addition), 1, 2, 3, and 5 days of ABA treatment. The turions were separated from mother fronds and collected after 7 days of ABA treatment. After collection, the materials were immediately frozen in liquid nitrogen and then stored at -80°C for genomic DNA extraction. Every treatment was repeated three times. DNAs from three repeats were pooled and then used for MSAP.

Methylation-sensitive amplified polymorphism (MSAP) analysis. Total genomic DNA was extracted from plant tissue with DNA extraction kit ("Tiangen", China). The MSAP analysis followed a modified version of the original protocol published by Xiong et al. [19]. Two enzyme combinations EcoRI/MspI and EcoRI/HpaII were used. The primers are listed in table 1. In the first reaction, the genomic DNA (300400 ng) of each sample was digested with 10 units of EcoRI ("NEB", United States) and 20 units of HpaII

("NEB") for 6 h at 37°C in a total of 25 |L, using the manufacturer's buffer. The second digestion reaction was carried out in the same way, except that MspI was used in place of HpaII. The digested fragments were then ligated to the adapter by adding the 5 |L of liga-tion mixture containing 2 units T4 DNA ligase ("TaKaRa Biotechnology", Japan), 5 pmol EcoRI adapter, 50 pmol HpaII/MspI adapter, and T4 DNA ligase buffer, and incubated at 37°C for 4 h. The reaction was stopped by incubating at 65°C for 10 min. The reaction was diluted 10 times in ddH2O for PCR amplification.