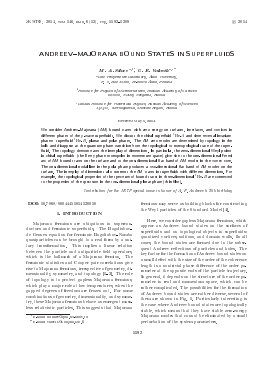 b Institute for Physics of Microstructures, Russian Academy of Sciences 603950, Nizhny Novgorod, Russia

We consider Andreev-Majorana (AM) bound states with zero energy on surfaces, interfaces, and vortices in different phases of the p-wave superfluids. We discuss the chiral superfluid JHo,4 and time reversal invariant phases: superfluid JHoi?, planar and polar phases. The AM zero modes are determined by topology in the bulk and disappear at the quantum phase transition from the topological to nontopological state of the super-fluid. The topology demonstrates the interplay of dimensions. In particular, the zero-dimensional Weyl points in chiral superfluids (the Berry phase monopoles in momentum space) give rise to the one-dimensional Fermi arc of AM bound states on the surface and to the one-dimensional flat band of AM modes in the vortex core. The one-dimensional nodal line in the polar phase produces a two-dimensional flat band of AM modes on the surface. The interplay of dimensions also connects the AM states in superfluids with different dimensions. For example, the topological properties of the spectrum of bound states in three-dimensional JHoi? are connected to the properties of the spectrum in the two-dimensional planar phase (thin film).

Cwitribvtiwi for the JETP special issue in honor of A. F. Andrew's 75th birthday

Majorana forniions arc ubiquitous in superconductors and fcrniionic superfluids. The Bogoliubov do Gcnnes equation for fcrniionic Bogoliubov Nanibu quasiparticlos can be brought to a real form by a unitary transformation. This implies a linear relation between the particle and antiparticlo field operators, which is the hallmark of a Majorana formion. The fcrniionic statistics and Cooper pair correlations give rise to Majorana forniions, irrespective of geometry, dimensionality, symmetry, and topology fl 3]. The role of topology is to protect gapless Majorana forniions, which play a major role at low temperatures, when the gapped degrees of freedom are frozen out. For some combinations of geometry, dimensionality, and symmetry, these Majorana forniions behave as emergent mass-less relativistic particles. This suggests that Majorana

forniions may serve as building blocks for constructing the Weyl particles of the Standard Model [4].

Hero, wo consider gapless Majorana forniions, which appear as Andreev bound states 011 the surfaces of superfluids and 011 topological objects in superfluids: quantized vortices, solitons, and domain walls. In all cases, the bound states are formed due to the subsequent Andreev reflections of particles and holes. The key factor for the formation of Andreev bound states 011 a small defect with the size of the order of the coherence length is a nontrivial phase difference of the order parameter at the opposite ends of the particle trajectory. In general, it depends 011 the structure of the order parameter in real and momentum space, which can be rather complicated. The possibilities for the formation of Andreev bound states are rather diverse, several of them are shown in Fig. 1. Particularly interesting is the case where Andreev bound states are topologically stable, which means that they have stable zero-energy Majorana modes that cannot be eliminated by a small perturbation of the system parameters.

Fig. 1. Schematic picture of the formation of Andreev bound states localized (a) on domain wall, (b) on the edge, and (c) inside the vortex core. In all cases, the mechanism is the subsequent particle-hole conversions via Andreev reflections at the opposite ends of the trajectory s. The reflected particle (hole) picks up the phase of the order parameter (—<pl) and flips the group velocity direction vp (v^) as shown in panel a. In general, the wave vectors of the particle and the hole in the bulk are slightly different, kp,h = ± E/vf, where Rf and vf are Fermi momentum and velocity, and E is the energy. If the order parameter phase difference is 4>r — 4>l = a closed loop can be formed even for ke = kh, that is, for the zero energy E — 0. In cases (b, c), the phase difference occurs due to the momentum dependence of the gap function and the

General properties of the fermionic spectrum in condensed-matter and particle physics are determined by topology of the ground state (vacuum). The classification schemes based on topology [5-11] suggest the classes of topological insulators, fully gapped topological superfluids/superconductors, and gapless topological media. In Refs. [9-11], the classification is based on topological properties of the matrix Green's function, while other schemes explore the properties of a single-particle Hamiltonian and are therefore applicable only to systems of free (noninteracting) fermions. Among the fully gapped topological superfluids, there is time-reversal invariant superfluid 3He-B, thin films of chiral superfluid 3He-A, and thin films of the time-

reversal invariant planar phase of superfluid 3He. The main signature of topologically nontrivial vacua with the energy gap in the bulk is the existence of zero-energy edge states on the boundary, at the interface between topologically distinct domains [12, 13] and in the vortex cores [14]. For superfluids and superconductors, these are Andreev-Majorana (AM) bound states. These are mainly propagating fermionic quasi-particles, which have a relativistic spectrum at low energy [15-20]. However, for special geometries and dimensions, the AM bound state represents an isolated nonpropagating midgap state, called the Majorana zero mode (or Majorino [21]). It is not a fermion, because it obeys a non-Abelian exchange statistics [22]. This in

particular occurs for the AM bound states in the vortex core of chiralwave supcrfluid-superconductor in 2—1 dimensions [23].

A gapless AM bound state also occurs on the surfaces, interfaces, and in the vortex cores of gapless topological media. Among them, there are chiral superfluid 3He-,4 with Weyl points, the time-reversal invariant planar phase with Dirac points, and the time-reversal invariant polar phase with a line of zeroes. The spectrum of AM bound states is nonrelativistic and exotic: the zeroes of the AM bound-state spectrum form Fermi arcs [24 27] and flat bands [28 35].

The />-wave superfluid 3He was discovered in 1972. But until now, there is little understanding of super-fluid 3He films. The information on recent experiments in confined geometry can be found in review [36]. In thin films, a competition is expected between the chiral superfluid 3He-,4 and the time-reversal invariant planar phase, both acquiring a gap in the spectrum in the quasi-two-dimensional case due to transverse quantization.

The fermionic spectra in both the 2D ,4 phase and the planar phase have nontrivial topological properties. These topological states provide examples of systems featuring generic topological phenomena. In particular, an analog of the integer quantum Hall effect exists in the 2D ,4 phase, where the internal orbital momentum of Cooper pairs plays the role of the time reversal symmetry breaking magnetic field. In the time reversal invariant planar phase, the quantum spin Hall effect can be realized. In a close analogy with 2d electronic systems, a topological invariant is determined by the number of fermionic edge modes with zero energy. In the superfluid systems, the edge zero modes are the An-dreev bound states localized at the superfluid/'vacuum boundary or at the interfaces and domain walls separating superfluid states with different topological properties. Below, we discuss the topological properties and Andreev bound states for the 2D ,4 phase and the planar phase in detail.

The order parameter in a spatially homogeneous time reversal symmetry breaking 3He-,4 phase is given by

nonzero L- plays the role of the internal magnetic field breaking the time-reversal symmetry of the systems. Confined in the xy plane, the 2D state of the ,4 phase is a fully gapped system. By the analogy with the 2D electronic g cts in a quantized magnetic field, the gapped ground states (vacua) in 2—1 or quasi 2—1 thin films of 3He-,4 are characterized by the topological invariant [37 41]

Here, G = G(px,py,u) = ipo) is the Green's function matrix, which depends on the Matsubara frequency Po\ the integration is over the whole (2— 1 )-dimensional momentum frequency space />, = (px.Py.po)< or over the Brillouin zone and po in crystals. Expression (1) is an extension of the TKNN invariant invented by Thouless, Kohomoto, Nightingale, and den Nijs to describe topological quantization of the Hall conductance [42, 43].

The advantage of the topological approach is that we can choose to work with the simplest form of the Green's function, which has the same topological properties and can be obtained from the complicated one by a continuous deformation. For a single layer of a 3He-,4 film, we can choose

where//2 = P2,+Py. The Pauli matrices 71,2,3 and (Tr,y,-respectively correspond to the Bogoliubov Nanibu spin and th