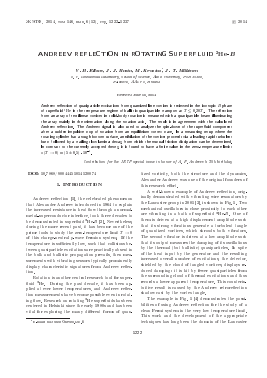 Andreev reflection of quasiparticle excitations from quantized line vortices is reviewed in the isotropic B phase of superfluid JHo in the temperature regime of ballistic quasiparticle transport at T < 0.20T,:. The reflection from an array of rectilinear vortices in solid-body rotation is measured with a quasiparticle beam illuminating the array mainly in the orientation along the rotation axis. The result is in agreement with the calculated Andreev reflection. The Andreev signal is also used to analyze the spin-down of the superfluid component after a sudden impulsive stop of rotation from an equilibrium vortex state. In a measuring setup where the rotating cylinder has a rough bottom surface, annihilation of the vortices proceeds via a leading rapid turbulent burst followed by a trailing slow laminar decay, from which the mutual friction dissipation can be determined. In contrast to the currently accepted theory, it is found to have a finite value in the zero-temperature limit: a(T 0) = (5 ±0.5) • 1(T4.

Contribution for the JETP special issue in honor of A. F. Andreev's 75th birthday

Andreev reflection fl], the celebrated phenomenon that Alexander Andreev introduced in 19C4 to explain the increased resistance in heat flow through a normalmetal superconductor interface, took three decades to be demonstrated in superfluid 3He-U [2]. Nevertheless, during the more recent past, it has become one of the prime tools to study the zero-temperature limit T —¥ 0 of this charge-neutral p-wave fermion system. If the temperature is sufficiently low, such that collisions between quasiparticle excitations are practically absent in the bulk and ballistic propagation prevails, then measurements with vibrating sensors typically prominently display characteristic signatures from Andreev reflection.

Rotation is another central research tool for super-fluid 3He. During the past decade, it has been applied at ever lower temperatures, and Andreev reflection measurements have become possible even in rotating flow. Research on rotating 3He superfluids has been centered in Helsinki since the early 1980s and has been vital for exploring the many different forms of quan-

tized vorticity, both the structure and the dynamics. Alexander Andreev was one of the original founders of this research effort.

A well-known example of Andreev reflection, originally demonstrated with vibrating wire resonators by the Lancaster group in 2001 [3], is shown in Fig. 1. Two mechanical oscillators in close proximity to each other are vibrating in a bath of superfluid 3He-U. One of them is driven at a high displacement amplitude such that its strong vibrations generate a turbulent tangle of quantized vortices, which shrouds both vibrators. The second vibrator is driven at a low amplitude such that its output measures the damping of its oscillations by the thermal (but ballistic) quasiparticles. In spite of the heat input by the generator and the resulting increased overall number of excitations, the detector, shielded by the cloud of tangled vortices, displays reduced damping: it is hit by fewer quasiparticles from the surrounding cloud of thermal excitations and thus records a lower apparent temperature. This counterintuitive result is caused by the Andreev retroreflection shadow cast by the vortex tangle.

The example in Fig. 1 [4] demonstrates the possibilities of using Andreev reflection for the study of a clean Fermi system in the very low temperature limit. This work and the development of the appropriate techniques has long been the domain of the Lancaster

Fig. 1. Demonstration of Andreev reflection [4]. As sketched in the inset, two quartz tuning fork oscillators are vibrating in a container filled with 3He-B at 0.20TC. A drive with a square wave envelope at high amplitude is fed to one of the forks, which generates a turbulent vortex tangle. The tangle spreads around the two forks and casts an Andreev shadow, which is recorded as reduced damping by the second sensor fork driven at a one order of magnitude lower excitation amplitude

group [5]. More recently, the ultra-low temperature regime of 3He-B has moved to the forefront of general interest when it was realized that conventional sub-mK refrigeration techniques by means of adiabatic demagnetization cooling of copper are quite adequate if the total heat leak to the sample volume can be reduced to below ~ 20 pW. This recognition has led to the development of new measuring techniques for the ballistic regime in superfluid 3He that are based on the use of mechanical vibrating resonance devices [6] or the existence of a novel coherently precessing NMR mode [7]. Such a work has been driven by the hope to reveal explicit new information on Andreev reflection, or on the existence of Andreev bound states on surfaces, interfaces, and vortex cores, or the expectation to identify the Majorana character in the spectrum of bound-state excitations [8].

Today, the experimental tools for using Andreev reflection consist of a quasiparticle radiator, a box with a heating element coupled to the 3He-£? bath via a small orifice that defines the beam, and a sensor in the bath, which traditionally has been a highly sensitive vibrating wire resonator. More recently, the mass-produced quartz tuning fork oscillator [9] has been found to have sufficient sensitivity as a quasiparticle detector and because of its easier use and insensitivity to magnetic fields, it has gained in popularity.

Originally, Andreev reflection measurements in rotation became necessary as a means to calibrate reflection from quantized line vortices [12]. This provides the starting point for the discussion below. The same experimental setup can also be used to record the dynamic response of a rotating vortex array. The most common type of such measurements is the determination of the response to a sudden stop of the rotation drive. Based on our knowledge of superfluid flows in 4He, it has been thought that laminar flow of quantized line vortices becomes unstable in the limit of vanishing mutual friction: when a(T) 0 any minute perturbations in the flow can lead to instabilities and cause a tangle of vortices to be formed, such that new dissipation mechanisms become available, primarily fueled by reconnections between neighbouring vortices. Andreev reflection provides one of the means to monitor the flow of vortices. Recent measurements have shown that in 3He-£?, turbulence is not necessarily the only form of response [11]. Depending on the geometry, surface properties, etc., the rate of vortex decay from annihilation at the wall in a cylindrically symmetric flow as a response to a sudden reduction in the rotation velocity may correspond to the slow mutual friction damping of laminar flow or to a faster process brought about by additional turbulent dissipation mechanisms. Some of these studies are discussed below.

Fig. 2. Trajectory of a particle excitation that undergoes Andreev reflection on approaching a rectilinear quantized line vortex and then retraces its path as a hole excitation with a very small deflection by Acp

2. ANDREEV SHADOW OF A VORTEX

The theory of Andreev reflection is particularly straightforward in the ballistic temperature regime, as has been demonstrated by Barenghi et al. [13], who used Hamiltonian mechanics to calculate the trajectory of a quasiparticle scattered by a single rectilinear vortex (Fig. 2).

The quasiparticle moves with the kinetic energy

with respect to the Fermi energy ep = p2F/{2m*), where p is the linear quasiparticle momentum and m* is its effective mass (we refer here to the 29 bar pressure of the 3He liquid in the measurements in Sec. 4 with m* « 5.4m, where m is the bare mass of the 3He atom). The superfluid circulation k = h/{2m) trapped around the vortex core corresponds to an azimuthally circulating superfluid flow with the velocity

the particle can be traced from the Hamiltonian equations of motion dr/dt = dE/dp (= the group velocity of the excitations) and dp/dt = —dE/dr. Two length scales are involved: (1) one describes the change in the order parameter amplitude at the vortex, the vortex core radius, measured in terms of the superfluid coherence length £0 = hvp/(ttAq) ~ 10 nm, while (2) the scattering process is characterized by an angular momentum p^po (where p^ = p • e^), which is a constant of motion and defines the second length scale, the impact parameter p0-

In the ballistic regime, the quasiparticle energy spectrum resembles the roton minimum in superfluid 4He, since

is found to follow a usual straight trajectory past the vortex, retaining its particle nature. For particle excitations, this is the case on that side of the vortex where

while on the opposite side, there are no allowed s