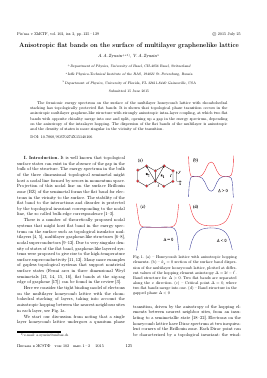 Anisotropic flat bands on the surface of multilayer graphenelike lattice

The lermionic energy spectrum on the surface ol the multilayer honeycomb lattice with rhombohedral stacking has topologically protected flat bands. It is shown that topological phase transition occurs in the anisotropic multilayer graphene-like structure with strongly anisotropic intra-layer coupling, at which two flat bands with opposite chirality merge into one and split, opening up a gap in the energy spectrum, depending on the anisotropy ol the intralayer hopping. The dispersion ol the flat bands ol the multilayer is anisotropic and the density ol states is more singular in the vicinity ol the transition.

I. Introduction. It is well known that topological surface states can exist in the absence of the gap in the bulk of the structure. The energy spectrum in the bulk of the three dimensional topological semimetal might host a nodal line formed by zeroes in momentum space. Projection of this nodal line on the surface Brillouin zone (BZ) of the semimetal forms the flat band for electrons in the vicinity to the surface. The stability of the flat band to the interactions and disorder is protected by the topological invariant corresponding to the nodal line, the so called bulk-edge correspondence [1-3].

There is a number of theoretically proposed nodal systems that might host flat band in the energy spectrum on the surface such as topological insulator multilayers [4, 5], multilayer graphene-like structures [6-8], nodal superconductors [9-12]. Due to very singular density of states of the flat band, graphene-like layered systems were proposed to give rise to the high-temperature surface superconductivity [11, 12]. Many more examples of gapless topological systems that support nontrivial surface states (Fermi arcs in three dimensional Weyl semimetals [13, 14, 15, 16], flat bands at the zig-zag edge of graphene [17]) can be found in the review [3].

Here we consider the tight binding model of electrons on the multilayer honeycomb lattice with the rhombohedral stacking of layers, taking into account the anisotropic hopping between the nearest-neighbour sites in each layer, see Fig. la.

Fig. 1. (a) - Honeycomb lattice with anisotropic hopping elements, (b) - ky = 0 section of the surface band dispersion of the multilayer honeycomb lattice, plotted at different values of the hopping element anisotropy A = 2t — t'. Band structure for A > 0. TVo flat bands are separated along the x direction, (c) - Critical point A = 0, where two flat bands merge into one. (d) - Band structure in the gapped phase A < 0

transition, driven by the anisotropy of the hopping elements between nearest neighbor sites, from an insulating to a semimetallic state [18-22]. Electrons on the honeycomb lattice have Dirac spectrum at two inequiva-lent corners of the Brillouin zone. Each Dirac point can be characterized by a topological invariant: the wind-

ing number around any surface in momentum space, enclosing the point [1, 2, 23]. Strong anisotropy of the hopping elements breaks the twofold valley degeneracy corresponding to the two Dirac points. The pair of Dirac points can be annihilated by merging these points together at special values of the hopping elements. The detailed review of the properties of the anisotropic graphenelike systems can be found in [17, 24].

The multilayer with rhombohedral stacking of honeycomb lattice layers possesses interesting electronic properties. The energy spectrum of electrons on the outer surfaces of such multilayer has a form of the flat band, while the bulk energy spectrum possesses spiral nodal lines [8, 5, 17]. Projection of two nodal spiral on the outer edges of the multilayer defines the boundaries of the of flat bands at two inequivalent corners of the BZ of honeycomb lattice. The opposite winding of two nodal lines in momentum space reflects in the opposite chiralities of the corresponding flat bands on the surface.

We show that the in-plane anisotropic hopping at fixed interlayer hopping transforms two nodal spirals into a single nodal loop. Strong in-plane anisotropy squeezes the nodal loop into a single point and then gaps out the spectrum. We show that due to the bulk-surface correspondence there occurs a quantum phase transition on the surface of the anisotropic honeycomb multilayer structure, at which two flat bands merge into one and then split opening up a gap in the surface spectrum, Fig.1.

II. Single layer. Here for the readers convenience we first review the details of the band structure and describe the phase transition in the single anisotropic layer and then make generalization to the multilayered structure.

The triangular lattice with two atoms per unit cell is defined by lattice vectors, which can be written as ai = = a(y/3ex+3ev)/2 and a2 = a( — y/3ex+3ev)/2, where a is the distance between the nearest-neighbour sites and ej, i = x,y,z are the basis vectors. The three vectors that connect nearest-neighbour sites on the lattice are defined as = a(y/3ex+ev)/2, 82 = a( — ^f3ex + ey)/2, and S3 = —aey. The Hamiltonian of the monolayer honeycomb lattice with anisotropic hopping is given by:

where Ф^к = (a^k, Ь<т,к)Т, а<т,к and b<7jк are the annihilation operators of electron with spin projection a =t, 4- on two sublattices of the honeycomb lattice; o"± = o~x ± icy, where aj, j = (x, y, z), is the Pauli matrix acting on the sublattice pseudospin degree of freedom. Taking into account only nearest-neighbour hopping, one obtains:

Diagonalizing the Hamiltonian (1), one obtains energy spectrum of the monolayer:

Dirac points can be found by solving equation 7k = 0:

2/3ta2 is the effective mass, с = 3ta is the Fermi velocity along у direction, and Д = 21 — t'. Note that for Д > 0 the energy spectrum of the monolayer has two Dirac points at kx± = ±V2тД, ky = 0, while for Д < 0 the spectrum is gapped. The quantum phase transition from semimetal to insulator state of the lattice takes place when Д = 0 [18-20,24]. In the vicinity of the transition point on the semimetal side, the band dispersion is anisotropic. It is quadratic along the x direction, but remains linear in the у direction.

Dirac points in the band spectrum of each layer might host a topological flat band on its surface [7, 8].

Diagonalizing Eq. (7) in the limit of infinite number of layers, N —> oo, the effective Hamiltonian in momentum space is given by Hml = >t

and d is the distance between the layers. One has the following band dispersion of the bulk system:

The energy spectrum of the bulk system has nodal spirals or loops depending on hopping parameters. Projection of these bulk nodal structures on the constant surface kz = const defines the region of the flat band on the surface in momentum space [8[:

Each nodal spiral can be characterized by a topological invariant: the winding number around any surface in momentum space enclosing the nodal line [8, 22, 25, 26]. The winding numbers