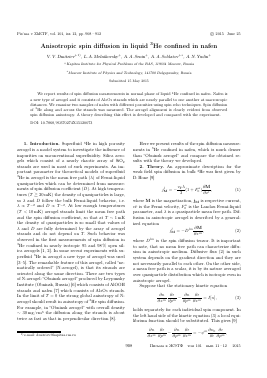 Anisotropic spin diffusion in liquid 3He confined in nafen

^Kapitza Institute for Physical Problems of the RAS, 119334 Moscow, Russia * Moscow Institute of Physics and Technology 141700 Dolgoprudny, Russia Submitted 15 May 2015

We report results of spin diffusion measurements in normal phase of liquid 3He confined in nafen. Nafen is a new type of aerogel and it consists of AI2O3 strands which are nearly parallel to one another at macroscopic distances. We examine two samples of nafen with different porosities using spin echo techniques. Spin diffusion of 3He along and across the strands was measured. The aerogel alignment is clearly evident from observed spin diffusion anisotropy. A theory describing this effect is developed and compared with the experiment.

1. Introduction. Superfluid 3He in high porosity aerogel is a model system to investigate the influence of impurities on unconventional superfluidity. Silica aerogels which consist of a nearly chaotic array of SiC>2 strands are used in most of such experiments. An important parameter for theoretical models of superfluid 3He in aerogel is the mean free path (A) of Fermi-liquid quasiparticles which can be determined from measurements of spin diffusion coefficient (D). At high temperatures (T > 20 mK) the density of quasiparticles is large, so A and D follow the bulk Fermi-liquid behavior, i.e. A (x T-2 and D (x T 2. At low enough temperatures (T < 10 mK) aerogel strands limit the mean free path and the spin diffusion coefficient, so that at T ~ 1 mK the density of quasiparticles is so small that values of A and D are fully determined by the array of aerogel strands and do not depend on T. Such behavior was observed in the first measurements of spin diffusion in 3He confined in nearly isotropic 95 and 98 % open silica aerogels [1, 2]. In some recent experiments with superfluid 3He in aerogel a new type of aerogel was used [3-5]. The remarkable feature of this aerogel, called "ne-matically ordered" (N-aerogel), is that its strands are oriented along the same direction. There are two types of N-aerogel: "Obninsk aerogel" produced by Leypunsky Institute (Obninsk, Russia) [6] which consists of AlOOH strands and nafen [7] which consists of AI2O3 strands. In the limit of T = 0 the strong global anisotropy of N-aerogel should result in anisotropy of 3He spin diffusion. For example, in "Obninsk aerogel" with overall density ~ 30mg/cm3 the diffusion along the strands is about twice as fast as that in perpendicular direction [8].

Here we present results of the spin diffusion measurements in 3He confined in nafen, which is much denser than "Obninsk aerogel" and compare the obtained results with the theory we developed.

2. Theory. An approximate description for the weak field spin diffusion in bulk 3He was first given by D. Hone [9]

where M is the magnetization, jM is respective current, «f is the Fermi velocity, F§ is the Landau Fermi-liquid parameter, and A is a quasiparticle mean free path. Diffusion in anisotropic aerogel is described by a generalized equation

where Dlm is the spin diffusion tensor. It is important to note, that no mean free path can characterize diffusion in anisotropic medium. Diffusive flux (2) in such system depends on the gradient direction and they are not necessarily parallel to each other. On the other side, a mean free path is a scalar, it is by its nature averaged over quasiparticle distribution which is isotropic even in anisotropic aerogel.

Suppose that the stationary kinetic equation

holds separately for each individual spin component. In the left hand side of the kinetic equation (3) a local equilibrium function should be substituted. This gives [9]

The magnetization here and below is taken in magneton units 7 ft = 1.

Calculation of Dlm is greatly simplified at low temperature so that the collisions between Fermi quasipar-ticles can be neglected. This means that the scattering of quasiparticles on the aerogel alone is responsible for the collision integral

Furthermore, the solution of the kinetic equation can be sought for in the form

where x depends on the direction of p only. The kinetic equation becomes

where da is the differential scattering cross section per unit volume.

We now have all tools ready for the diffusion tensor calculation. The differential cross section da depends on the microscopic aerogel structure and the properties of quasiparticle scattering by aerogel strands. Let us represent the aerogel as an array of infinite cylindrical strands with diameter d oriented in z direction and randomly distributed in xy plane with the surface density N. The porosity of such structure is therefore

For the scattering on the cylinder walls we consider two opposite limits: diffuse and specular reflection.

2.1. Diffuse reflection. After diffuse reflection all information about the velocity direction of the incident particle is lost. The scattering cross section on a unit wall area is

where the unit vector m is the outer normal to the surface element. For a system of z-aligned cylinders, this vector is uniformly distributed in xy plane. The differential scattering cross section for this system is obtained by integration

Generally, the diffusion tensor Dlm has three principal values. Due to the axial symmetry of the system, it can be characterized by the mere two distinct components -D" and DL. It is therefore sufficient to calculate the diffusion in two directions: along and across the aerogel axis. In the former case the kinetic equation (4) is

If we substitute (6) in (7) and use the fact that the distribution function does not depend on the polar angle <t>, we get

The solution of this equation

should be substituted in (5) to get the flux

Similar procedure can be used to investigate the lateral diffusion. If ipm has only x component, then the kinetic equation has the form

which leads to the magnetization flux

The diffusion anisotropy is described by the ratio

We again write down the kinetic equation

which results in the magnetization flux

The experimental chamber used in the present work was similar to the chamber described in [3]. It is made of Stycast-1266 epoxy resin and has two separate cells. The cuboid samples with characteristic sizes of 4 mm are placed freely in the cells, so that ~ 70 % of each cell is filled with nafen.

Experiments were carried out using spin-echo technique in magnetic field « 280 Oe (corresponding NMR frequency is «900 kHz) at pressure of 2.9 bar. In order to avoid a paramagnetic signal from solid 3He on the surface of strands, the samples were preplated by ~ 2.5 atomic layers of 4He. The strands of the samples were oriented parallel to the external steady magnetic field H. Two gradient coils were used to apply the field gradient in directions parallel and perpendicular to the strands. The n