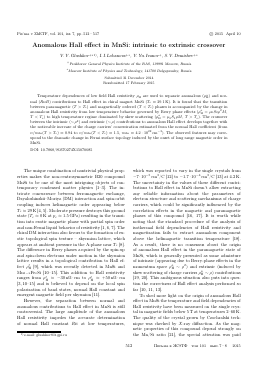 The unique combination of nontrivial physical properties makes the non-centrosymmetric B20 compound MnSi to be one of the most intriguing objects of contemporary condensed matter physics [1-3]. The intricate concurrence between ferromagnetic exchange, Dzyaloshinskii-Moriya (DM) interaction and spin-orbit coupling induces helimagnetic order appearing below Tc « 29 K [4, 5]. Moderate pressure destroys this ground state (Tc « 0 K at pc « 1.5 GPa) resulting in the transition into exotic magnetic phase with partial spin order and non-Fermi liquid behavior of resistivity [1, 6, 7]. The chiral DM interaction also favors to the formation of exotic topological spin texture - skyrmion lattice, which appears at ambient pressure in the A-phase near Tc [8]. The difference in Berry phases acquired by the spin-up and spin-down electrons under motion in the skyrmion lattice results in a topological contribution to Hall effect yo^ [9], which was recently detected in MnSi and Mni-^Fe^Si [10-15]. This addition to Hall resistivity ranges from p^ « —30 ni7 • cm to p^ « +50 ni7 • cm [3,10-15] and is believed to depend on the local spin polarization of band states, normal Hall constant and emergent magnetic field per skyrmion [11].

However, the separation between normal and anomalous contributions to Hall effect in MnSi is still controversial. The large amplitude of the anomalous Hall resistivity impedes the accurate determination of normal Hall constant i?n at low temperatures,

which was reported to vary in the single crystals from —7 • 10~5 cm3/C [12] to —1.7 • 10~4 cm3/C [13] at 4.2 K. The uncertainty in the values of these different contributions to Hall effect in MnSi doesn't allow extracting any reliable information about the parameters of electron structure and scattering mechanisms of charge carriers, which could be significantly influenced by the correlation effects in the magnetic and paramagnetic phases of this compound [16, 17]. It is worth while noting that the standard procedure of the analysis of isothermal field dependencies of Hall resistivity and magnetization fails to extract anomalous component above the helimagnetic transition temperature [18]. As a result, there is no consensus about the origin of anomalous Hall effect in the paramagnetic state of MnSi, which is generally presented as some admixture of intrinsic (appearing due to Berry-phase effects in the momentum space p^ ~ p2) and extrinsic (induced by skew scattering of charge carriers p^ ~ p) contributions [19, 20]. This ambiguous situation also puts into question the correctness of Hall effect analysis performed so far [10, 11, 13].

To shed more light on the origin of anomalous Hall effect in MnSi the temperature and field dependencies of Hall resistivity have been measured on the single crystal in magnetic fields below 5 T at temperatures 2-60 K. The quality of the crystal grown by Czochralski technique was checked by X-ray diffraction. As the magnetic properties of this compound depend strongly on the Mn/Si ratio [21], the special attention was paid

to the control of the sample's stoichiometry. EPMA data showed that the deviation from the stoichiometric composition doesn't exceed y « 0.01 assuming Mni+ySii-y chemical formula. More detailed information about structural and magnetic properties can be found in the preceding studies of the single crystals, which are identical to those studied in the present work [7, 22-24]. The resistivity and Hall resistivity were measured simultaneously by using the standard six-probe scheme. The original technique with the step-by-step rotation of the sample in steady magnetic field was applied for the measurements of low-field Hall voltage within the 1-3 nV accuracy [25]. The axis of rotation was parallel to dc current (30-100 mA) applied along the (110) direction (see inset in Fig. 1). The size of the

crystal (5.2 x 0.68 x 0.54 mm3) was chosen to minimize the anisotropy due to demagnetizing field. The demagnetization factor of the sample under investigation (N k, 0.52) was evaluated within standard approach [26]. The magnetization data M(H,T) earlier reported in [24] were collected with the help of MPMS-5 setup.

PoHq = 0.31 T. The amplitude of Hall effect increases drastically when approaching Tc from low temperatures. The form of the signal is well described by the single harmonic of ph(<p) = Ph(T, Hq) cos ip, where <p is the angle between (100) and applied magnetic field (Fig. 1). In moderate fields (poHo > 2T) a second harmonic pmif) = pm(T,Ho)cos(2<f) appears distorting the form of Hall resistivity data. This feature, which is similar to that one earlier reported for the related compound FeSi [27], may correspond to the mechanism suggested in [28] and will be discussed in details elsewhere.

The extracted values of ph(T, Hq) were refined to allow for the demagnetization effects assuming the linear Ph(Hq) and M(Hq) dependencies in the range of magnetic fields poHo < 0.5 T. The corrected temperature dependencies of Hall resistivity in a fixed magnetic field Ph(.T,B0) = pn{T,H0)/[l + (1 - N)M(Ho)/Ho)] are summarized in Fig. 2. Our presentation of the low-field data allows to resolve a pronounced peak of ph(T, Bq) occurring around Tc. This feature is much sharper that the anomaly of p^ reported for other correlated magnets [29]. The amplitude of the pn maximum is found to rise from +50 nil - cm for Bq = 0.155 T to +95 nil - cm for Bq = 0.31 T (Fig. 2a-c). In higher magnetic fields the position of the maximum shifts to the paramagnetic phase and exceeds Tc by more than 10 Iv (see data for 4.04 T in Fig. 2). Note also that Hall effect in the magnetically ordered phase of MnSi changes sign from negative to positive when temperature increases from 2 Iv to Tc (Fig. 2). It is worth noting that the temperature evolution and the absolute values of Hall resistivity in MnSi agree well with the data reported earlier in [10, 11].

The strong temperature dependence of low-field Hall resistivity ph(T, Bq) in MnSi allows us to apply the following procedure for separating the normal and anomalous components pn = R^B + p^. The functional form of the anomalous term p^ = poMSnpn depends on the dominant mechanism of interaction between itinerant electrons and localized magnetic moments [29]. In the case of MnSi the exponent n = 2 corresponds to the intrinsic contribution related to the fc-space Berry phase effects [15]. Note that the same exponent n = 2 may result from extrinsic effects due to side-jump scattering [29]. This problem was carefully analysed in the studies of pure and Fe doped MnSi single crystals [15] and epitaxial MnSi thin films [20]. The sample-dependent contribution from side-jump scattering was shown to be negligibly small [20] that agrees rather well with the numerical estimations [15]. The case of n = 1 is associated with asymmetric skew scattering of spin-up and spin-down charge carriers on the magnetic cen-

ters due to spin-orbit coupling [29]. To resolve between these regimes, we represented our data in pu/B = = f(p0Mp2/B) (Fig. 3a) and pK/B = f{p0Mp/B) plots (Fig. 3b). Fig. 3 demonstrates evidently that the data for magnetically ordered (T < Tc) and paramagnetic (T > Tc) phases should be described within the different approximations. In the range T < Tc the best linearization of the pu/B curves may be obtained in coordinates pu/B = i?n + poMSop1 /B with the