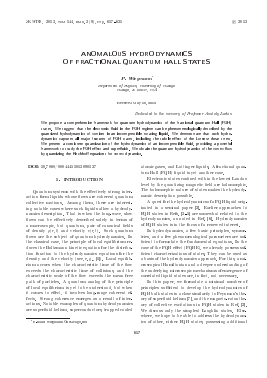 Dedicated to the memory of Professor Anatoly Larkin

Quantum systems with the effectively strong interaction form liquids whose flows are coherent quantum collective motions. Among them, there are interesting notable cases where such liquids allow a hydrodynamics description. That is when the long-wave, slow flows can be effectively described solely in terms of a macroscopic, but quantum, pair of canonical fields of density p(r,t) and velocity c(r.t). Such quantum flows are the subject of quantum hydrodynamics. In the classical case, the principle of local equilibrium reduces the Boltzmann kinetic equation for the distribution function to the hydrodynamics equations for the density and the velocity (see, e.g., [1]). Local equilibrium occurs when the characteristic time of the flow exceeds the characteristic time of collisions, and the characteristic scale of the flow exceeds the mean free path of particles. A quantum analog of the principle of local equilibrium is yet to be understood, but when it conies to effect, it involves long-range coherent effects. Strong coherence emerges as a result of interactions. Notable examples of quantum hydrodynamics are superfluid helium, superconductors, trapped cooled

atomic gases, and Luttinger liquids. A fractional quantum Hall (FQH) liquid is yet another case.

Electronic states confined within the lowest Landau level by the quantizing magnetic field are holomorphic. The holomorphic nature of states makes the hydrodynamics description possible.

In hydrodynamics, a few basic principles, symmetries, and a few phenomenological parameters are sufficient to formulate the fundamental equations. In the case of the FQH effect (FQHE), we already possess sufficient characterizations of states. They can be used as a basis of the hydrodynamics approach. For this, a microscopical Hamiltonian and a deeper understanding of the underlying microscopic mechanisms of emergence of correlated liquid states are, in fact, not necessary.

In this paper, we formulate a minimal number of principles sufficient to develop the hydrodynamics of FQH bulk states in a close similarity to Feynman's theory of superfluid helium [7], and the magneto-rot on theory of collective excitations in FQH states in Ref. [2]. We discuss only the simplest Laughlin states. Elsewhere, we hope to be able to address the hydrodynamics of other, richer FQH states, possessing additional

syniniotrios, such as the 5/2 state. They can be studied within the framework developed here.

We argue that states of the FQH liquid can be treated as flows of quantized vortices in a quantum incompressible rotating inviscid liquid. On this basis, we obtain the major features of the FQHE including subtle effects such as the Lorentz shear stress1^, missed by the previous approaches [3 6]. In particular, the Laughlin wave function

emerges as the ground state of the vortex fluid. Here, i = s/hc/eD is the magnetic length.

To the author's knowledge, a hydrodynamics of vortex flows has not been developed. It is an interesting subject in and of itself. Apart from the FQHE, it is also relevant in the theory of superfluids and classical hydrodynamics. In this paper, we present a consistent quantum hydrodynamics of such a fluid.

In Sec. 3, we start from the observation that the FQH states can be interpreted as the states of quantized Kirchhoff vortex matter and then develop the hydrodynamics of vortex matter in Sec. 4. We summarize the main results in Sec. 5, and then give the details of derivations in Sees. [6 9].

Some results presented below were obtained in collaboration with Alexander Abanov. This paper is an extended version of Ref. [14].

that are the Laughlin states. The FQH states form a quantum liquid. This liquid can be characterized as follows.

• The spectrum of bulk excitations is gapped [2,17]. The gap is less than the cyclotron energy, huic > ¿1,,. Only edge states excitations localized on the boundary are soft [18].

• The Hall conductance is fractionally quantized [16].

More subtle features recently discussed in the literature are as follows.

• Quantized double layers of the density at boundaries and vortices [19].

• The Lorentz shear stress and anomalous viscosity (or odd viscosity, or Hall viscosity) [8 12].

From the listed properties, we select a set of the foundational principles and attempt to obtain others as consequences. The set of basic principles is remarkably small. We only assume that electrons in the FQH regime form a quantum fluid and that the fluid is incompressible and flows possess a macroscopic number of equally oriented vortices.

We refer to such flow as chiral flow. Since in a quantum fluid, vorticity is quantized, a unit volume of the fluid contains the quantum of vorticity. We want to demonstrate that the chiral flow captures all known physics of the FQHE.

We start with a general discussion of scales of FQH (bulk) states.

2. FOUNDATIONAL PRINCIPLES OF HYDRODYNAMICS OF THE FQH LIQUID

Electrons in a quantizing magnetic field confined in 2D heterostructures in the regime dominated by the Coulomb interaction form FQH states. The most robust FQH states occur at the filling fraction v = 1/3;

There are two distinct energy scales: the cyclotron energy huic = eHB/nibC. which defines the distance between Landau levels, and the gap in the bulk excitation spectrum ¿1,,. The former is determined by the band electronic mass nib and by the magnetic field. The latter is a characteristic of the Coulomb energy. From the theoretical standpoint, the very existence of FQH states assumes that the cyclotron energy is larger than

the gap, Aj, -C fiuic. If this limit holds2\ the flows with an energy E exceeding the gap can still be comprised of states on the lowest Landau level, A„ -C E -C fiuic. Such motion does not depend on the band electronic mass mi).

We consider a small modulation of the electronic density p(r) and ignore the electrostatic interaction of a nonuniform charged fluid3). Such a flow has a momentum flux P(r) and propagates with a velocity v(r). We assume that at small modulations, the momentum flux is equal to P = ii),/>c. where m* is the inertia of the flow. It seems natural to assume that the inertia is set by the scale provided by the gap, A„ ~ fi2/m»£2. The mass m* exceeds that of a band electron:

Let Q be such a polynomial and Q^ be the Hermitian conjugate polynomial, which depends on antiholomor-pliic coordinates zi = .tr, — ///, and antiholomorphic momenta

The symbol "T" is the transposition. Then in the notation of the Bargmann space, the "bra" and "ket" states are

2! In experiments, the cyclotron energy is only a few times larger than the gap.

In FQH liquids, the Coulomb forces essentially block propagating waves in the bulk. In this paper, we neglect Coulomb forces in order to unmask laws of quantum hydrodynamics.

Flows within the first Landau level are incompressible. The term "incompressible flow" is sometimes attributed to the gapped spectrum. Rather, the incompressibility reflects the holomorphic nature of FQH states. This is seen fr