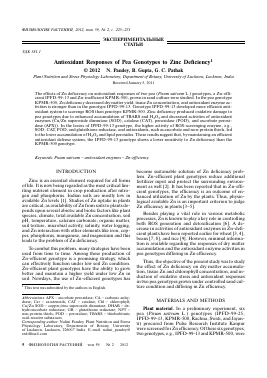 Zinc is an essential element required for all forms oflife. It is now being regarded as the most critical limiting nutrient element in crop production after nitrogen and phosphorus. Indian soils are mostly low in available Zn levels [1]. Studies of Zn uptake in plants are critical, as availability of Zn from soils to plants depends upon several abiotic and biotic factors like plant species, climate, total available Zn concentration, soil pH, temperature, calcium carbonate, organic matter, soil texture, microbial activity, salinity, water logging, and Zn interaction with other elements like iron, copper, phosphorus, manganese, and magnesium and this leads to the problem of Zn deficiency.

become sustainable solution of Zn deficiency problem. Zn-efficient plant genotypes reduce additional fertilizer input and protect the surrounding environment as well [2]. It has been reported that in Zn-effi-cient genotypes, the efficiency is an outcome of enhanced utilization of Zn by the plants. Thus, physiological available Zn is an important criterion to judge Zn efficiency in plants [3-5].

Besides playing a vital role in various metabolic processes, Zn is known to play a key role in controlling both ROS generation and detoxification [6]. A decrease in activities of antioxidant enzymes in Zn-defi-cient plants have been reported earlier for wheat [3, 4], beans [7, 8], and rice [9]. However, minimal information is available regarding the responses of dry matter accumulation and the antioxidant enzyme activities in pea genotypes differing in Zn efficiency.

Thus, the objective of the present study was to study the effect of Zn deficiency on dry matter accumulation, tissue Zn and chlorophyll concentration, and induction of oxidative stress and antioxidant responses in two pea genotypes grown under controlled sand culture condition and differing in Zn efficiency.

Enzyme activities. Ascorbate was extracted in 10% trichloroacetic acid and assayed according to [12] by following the reduction of Fe3+ to Fe2+ by ascorbic acid and measuring the color intensity of the Fe2+-a,a-bipyrridyl complex at 525 nm.

For NPT, leaves were chopped and ground with prechilled mortar and pestle with 5% sulfosalicylic acid. After centrifugation, the reaction was carried out with 10 mM DTNB (dithiobisnitrobenzoic acid) and 0.1 mM glutathione (reduced) [13]. The color intensity of extract was measured in a spectrophotometer at 412 nm after 15 min.

Lipid peroxides were measured spectrophotomet-rically at 532 nm after adjusting for non-specific ab-sorbance at 600 nm in terms of thiobarbituric acid-reactive substances (TBARS) as described in [14].

Hydrogen peroxide was estimated by the method described in [15]. Freshly chopped leaf tissues were ground in the chilled mortar in 100% chilled acetone and centrifuged at 10 000 g for 5 min. The supernatant was taken, mixed with water, and shaken thoroughly. Titanium chloride and then chilled ammonia were added to the supernatant. The precipitate was solubi-

lized and centrifuged. The residue was washed repeatedly with acetone to remove chlorophyll. The colorless residue was dissolved in 2 N H2SO4 and read at 415 nm.

Carbonic anhydrase (EC 4.2.1.1) was extracted by grinding fresh leaf tissue in prechilled 0.02 M barbiturate buffer (pH 8.15) containing 0.1 ^M EDTA and mercaptoethanol as described in [16]. Enzyme activities were expressed per total soluble protein in the enzyme preparations, as determined by the dye binding method described in [17].

For APX assay, 1 mM ascorbate was added to the extraction medium. The assay protocol have been described earlier [18].

SOD was assayed by monitoring the inhibition of photochemical reduction of nitroblue tetrazolium (NBT) in 3 ml of reaction mixture containing 50 mM potassium phosphate buffer, pH 7.0, 0.13 mM methionine, 75 ^M NBT, 2 ^M riboflavin, 0.1 mM EDTA, and 25 ^l of enzyme extract and read at 560 nm as described in [18]. One unit of enzymes is defined as the amount of enzyme causing 50% inhibition of NBT reduction. The activity of Cu/Zn SOD was determined by inhibiting the total activity with 3 mM KCN and subtracting the value from total SOD. For SOD iso-forms identification, the enzyme extract was loaded on 10% acrylamide gels at concentrations of 50 to 100 ^g protein and activity staining was performed by soaking gels in a staining solution consisting of 50 mM potassium phosphate buffer (pH 7.8), 0.03 mM riboflavin, 0.326% N, N, N', N' - tetraethylmethylethylene diamine (TEMED) and 1.25 mM of NBT in darkness for 30 min. The gels were removed from the staining solution, washed, immersed in a solution containing potassium phosphate buffer (pH 7.8) and 1 mM EDTA, and exposed to light under 15 W fluorescent lamps. The SOD isoforms were visualized as white bands against blue background and were photographed using a red filter. Identification of individual isozymes of Mn SOD and Cu/Zn SOD was done by soaking the gels in 5 mM H2O2 or 2 mM KCN prior to activity staining. The Mn SOD is resistant to KCN and H2O2, Cu/Zn SOD is sensitive to both reagents, and Fe SOD is sensitive to H2O2 but resistant to KCN [18].