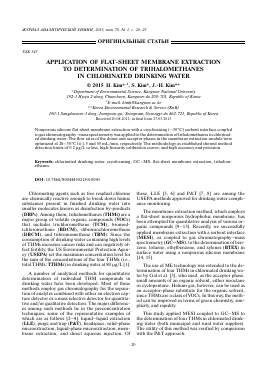 Nonporous silicone flat-sheet membrane extraction with a cryofocusing (—30°C) sorbent interface coupled to gas chromatography—mass spectrometry was applied to the determination of trihalomethanes in chlorinated drinking water. The flow rates of the donor and acceptor phases in the membrane extraction module were optimized at 28—30°C to 1.5 and 55 mL/min, respectively. The methodology as established showed method detection limits of 0.2 p.g/L or less, high-linearity calibration curves, and high accuracy and precision.

Chlorinating agents such as free residual chlorine are chemically reactive enough to break down humic substances present in finished drinking water into smaller molecules known as disinfection by-products (DBPs). Among them, trihalomethanes (THMs) are a major group of volatile organic compounds (VOCs) that includes trichloromethane (TCM), bromod-ichloromethane (BDCM), dibromochloromethane (DBCM), and tribromomethane (TBM). Since the consumption of drinking water containing high levels of THMs increases cancer risks and can negatively affect fertility, the US Environmental Protection Agency (USEPA) set the maximum concentration level for the sum of the concentrations of the four THMs (i.e., total THMs: TTHMs) in drinking water at 80 |g/L [1].

A number of analytical methods for quantitative determination of individual THM compounds in drinking water have been developed. Most of these methods employ gas chromatography for the separation of analytes combined with either an electron capture detector or a mass selective detector for quantitative and/or qualitative detection. The major differences among such methods lie in the preconcentration techniques, some of the representative examples of which are as follows [2—4]: liquid—liquid extraction (LLE), purge and trap (P&T), headspace, solid-phase microextraction, liquid-phase microextraction, membrane extraction, and direct aqueous injection. Of

these, LLE [5, 6] and P&T [7, 8] are among the USEPA methods approved for drinking water compliance monitoring.

The membrane extraction method, which employs a flat-sheet nonporous hydrophobic membrane, has been attempted for quantitative analysis of various organic compounds [9—13]. Recently, we successfully applied membrane extraction with a sorbent interface (MESI), as coupled to gas chromatography—mass spectrometry (GC—MS), to the determination of benzene, toluene, ethylbenzene, and xylenes (BTEX) in surface water using a nonporous silicone membrane [14, 15].

The use of ME technology was extended to the determination of four THMs in chlorinated drinking water by Gal et al. [3], who used, as the acceptor phase, small amounts of an organic solvent, either isooctane or cyclopentane. Helium gas, however, can be used as an acceptor-phase substitute for the organic solvent, since THMs are a class ofVOCs. In this way, the method can be improved in terms of green chemistry, simplicity, and rapidity.

This study applied MESI coupled to GC-MS to the determination of four THMs in chlorinated drinking water (both municipal and rural water supplies). The utility of this method was verified by comparison with the P&T approach.

Reagents and materials. TCM, BDCM, and DB-CM were purchased from Acros, TBM from Fluka, and 1-bromo-3-chloropropane (BCP, surrogate standard) from Aldrich. Methanol, which was used in the preparation of standard solutions, was obtained from Burdick & Jackson. Aqueous standard samples, prepared by diluting the standard solutions with water, were used for method validation. A nonporous flat-sheet silicone membrane (83 ^m thick, TI-8075) was acquired from Taejin Chemical. Tenax-TA (60/80 mesh, Supelco) was packed in the cryofocusing trap to enrich the volatile DBPs transferred from the extraction module.

Membrane extraction with sorbent interface. The extraction module used in our previous studies [14, 15] was employed for all of the present tests. The body of the module, composed of stainless steel, incorporates donor and acceptor channels separated by a silicone membrane. The volume of the groove in the half-cell, and the surface area of the groove in contact with either the donor or the acceptor, were 1.2 mL and 8.15 cm2, respectively. Membrane extraction, cryofocusing, and desorption were conducted as previously described [14, 15].

Conditions of analytical instruments. The desorbed analytes from the thermal desorber were injected into the GC—MS at a split ratio of 20 : 1. The temperature of the injector was maintained at 220°C. The analytical column used was an HP-5 (30 m length x 0.25 mm i.d. x 0.5 ^m film thickness; Hewlett Packard). The oven temperature was programmed as follows: remain at 40°C for 2 min, increase to 200° C at 8 grad/min, remain at that temperature for 2 min. The temperatures of the MS ion source and transfer line were 230 and 280°C, respectively. Quantitative determination of each analyte was conducted in the selective ion monitoring mode (m/z 83 and 85 for TCM and BDCM; 127 and 129 for DBCM; 173 and 254 for TBM; 74 and 82 for dichloroacetonitrile, DCAN; 43 for 1,1-dichloropropanone, DCP).

Method validation. Seven-point calibration curves were drawn for the individual DBPs in the concentration range of 0.5 to 25 ^g/L for TCM, and 0.2 to 15 ^g/L for

BDCM, DBCM, and TBM, after the chromatographic peak area for each compound was normalized by that for BCP (10 ^g/L). These concentration ranges were chosen based on the previous results for the study area [18].

Analytical accuracy was determined by calculating the relative percent differences (RPD, %) between prepared and measured concentrations for two concentration levels, 5 and 15 ^g/L. The method detection limits (MDL) were determined following the USEPA method [19], with reference to seven replicated measurements. The analytical reproducibility of the established method was evaluated after calculating the relative standard deviations (RSD, %) of the seven replicated measurements for two concentration levels (5 and 10 ^g/L). The proposed method was then compared with the P&T approach developed by the USEPA [20].

Application to field samples. To validate the developed method for field applicability, 100 chlorinated drinking water samples (from 20 municipal and 80 rural water supply systems) collected from Chuncheon, Korea were analyzed according to the developed and P&T methods. The respective concentrations of individual DBPs detected above the MDLs were compared by correlation analyses.

In this study, flat-sheet membrane extraction was coupled to GC—MS through cryofocusing and thermal desorption. Although the extraction efficiency of the analytes increased with temperature, 28—30°C was chosen for this system, because higher temperatures (35, 40, and 45°C, tested) increased the pressure inside the membrane extraction module, due probably to volatilization of water, thus interfering with the flow of the acceptor phase after a certain span of time (11, 9, 6 min for 35, 40, 45°C, respectively). Salt was not added to the water samples prior to extraction, owing to the fact that in a previous study, its presence rather decreased the extraction efficiency for BTEX [15]. The reason for this probably is that dissolved inorganic ions, rather than increasing water extraction by the salting-out effect, lower the chance of contact between DBP compounds and the membrane.

The above results can be explained as follows. A higher acceptor-phase flow rate helps transfer the