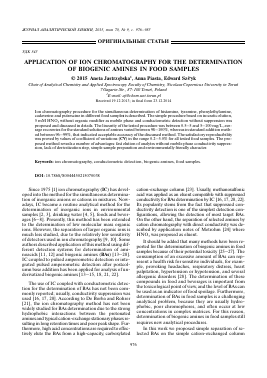 Ion chromatography procedure for the simultaneous determination of histamine, tyramine, phenylethylamine, cadaverine and putrescine in different food samples is described. The simple procedure based on isocratic elution, 5 mM HNO3 without organic modifier as mobile phase and conductometric detection without suppression was proposed and discussed in details. The linearity of the tested procedure was between 0.5—5 and 5—100 mg/L, average recoveries for the standard solutions of amines varied between 98—100%, whereas in standard addition method between 96—99%, that indicated acceptable accuracy of the discussed method. The satisfactory reproducibility was proved by values of coefficient of variations (CV) in the range 0.2—5.0% for all tested food samples. The proposed method reveals a number of advantages: fast elution of analytes without mobile phase conductivity suppression, lack of derivatization step, simple sample preparation and environmentally friendly character.

Since 1975 [1] ion chromatography (IC) has developed into the method for the simultaneous determination of inorganic anions or cations in mixtures. Nowadays, IC became a routine analytical method for the determination of inorganic ions in environmental samples [2, 3], drinking water [4, 5], foods and beverages [6—8]. Presently, this method has been extended to the determination of low molecular mass organic ions. However, the separation of larger organic ions is much less studied, due to the relatively low sensitivity of detectors used in ion chromatography [9, 10]. Some authors described application of this method using different detection systems for determination of ami-noacids [11, 12] and biogenic amines (BAs) [13—20]. IC coupled to pulsed amperometric detection or integrated pulsed amperometric detection after postcol-umn base addition has been applied for analysis of un-derivatized biogenic amines [13—15, 18, 21, 22].

The use of IC coupled with conductometric detection for the determination of BAs has not been commonly reported; usually, conductivity suppression was used [16, 17, 20]. According to De Borba and Rohrer [21], the ion chromatography method has not been widely studied for BAs determination due to the strong hydrophobic interactions between the protonated amines and typical cation-exchange stationary phases resulting in long retention times and poor peak shape. Furthermore, high acid concentrations are required to effectively elute the BAs from a high-capacity, carboxylated

cation-exchange column [23]. Usually, methanosulfonic acid was applied as an eluent compatible with suppressed conductivity for BAs determination by IC [16, 17, 20, 22]. Its popularity stems from the fact that suppressed conductivity detection is one of the simplest detection configurations, allowing the detection of most target BAs. On the other hand, the separation of selected amines by cation chromatography with direct conductivity was described by application notes of Metrohm [24] where HNO3 was proposed as eluent.

It should be added that many methods have been reported for the determination of biogenic amines in food samples because of their potential toxicity [25—27]. The consumption of an excessive amount of BAs can represent a health risk for sensitive individuals, for example, provoking headaches, respiratory distress, heart palpitation, hypertension or hypotension, and several allergenic disorders [28]. The determination of these compounds in food and beverages is important from the toxicological point ofview, and the level ofBAs can be used as an indicator of food spoilage. Furthermore, determination of BAs in food samples is a challenging analytical problem, because they are usually hydro -phobic, poor chromophores, and often occur at low concentrations in complex matrices. For this reason, determination of biogenic amines in food samples still requires new analytical procedures.

based on isocratic elution and conductometric detection; 5 mM HNO3 without organic additives as a mobile phase and conductometric detection without suppression were applied. The proposed conditions of chromatographic analysis were used for determination of the most important BAs found in food: histamine, cadaver-ine, putrescine, tyramine and phenylethylamine in samples after simple sample preparation. It should be noted that despite application notes, this method is not popular for the biogenic amines determination in complex matrices due to strong hydrophobic interactions between pro-tonated amino groups and the stationary phase of many columns, resulting in long retention times and poor peak symmetry.

Analyses were carried out during the day of sample purchase. The solid samples were minced and homogenised in a commercial mincer and stored in a hermetic container at +4°C in the refrigerator.

Sample preparation method. The samples of fruits, meat and fish products were crushed and homogenised in food grinder with a plate of 3 mm diameter holes (two times). Next 10 g (±0.0001 g of fresh mass) were extracted with 15 mL of 2% TCA using an orbital shaker for 30 min followed by centrifugation (9000 rpm for 30 min) and filtration. The remaining proteins were precipitated by addition of 2 mL of Carrez solution I, K4Fe(CN)6, and Carrez solution II, ZnSO4, to the obtained extracts

followed by centrifugation (3000 rpm for 10 min) and double filtration. The final extracts were transferred into 25 mL volumetric flask, made up to the mark, prepared by the dilution in the deionised water if necessary and analysed by IC procedure. The unfiltered juice samples (15 ± 0.0001 mL) were separated using centrifuge at 3000 rpm for 10 min, followed by filtration and made up to the mark with deionised water. Finally, all samples were degassed and filtered through a nylon syringe filter (0.45 ^m membrane) and injected directly onto the column.

Determination of selected biogenic amines by IC. The

Qualitative analysis. In this paper, the separation was optimized to improve the resolution between Him, Tyr, Phenyl, Cad and Put, and we proposed several simplifications of this method. The separation of tested BAs was achieved using ion chromatography with nitric acid as eluent. The influence of eluent concentration (2-10 mM) on the separation ability was tested and obtained results are listed in Table 1.

It is worth noting that the increase of acid concentration could be very useful for routine analyses but only for columns which could tolerate lower pH mobile phase. In our studies, the concentration of HNO3 above 5 mM resulted in good peaks shapes (symmetric peaks with narrow width) but the elution strength was too high. The latter caused the decrease of the retention times of the BAs and co-migration of Phenyl, Put and Cad. On the other hand, the concentration of HNO3 below 5 mM resulted in a separation rate reduction and caused prolongation of analyses. The latter phenomenon could disturb the routine qualitative analysis for complex food samples. From the viewpoint of resolution, the optimal concentration of nitric acid was 5 mM because it could give satisfactory separation between all tested biogenic amines. Furthermore, the values of CV for retention time of standard BAs solutions determination varied from 0.56 to 1.97%, which suggested high intraday precision of the proposed method.

The Metrohm application note [24] for determination of dimethylamine, trimethylaminoxide, trimeth-ylamine, Put, Cad and Him in a fish sample proposed 6.0 mM HNO3 as eluent with 1