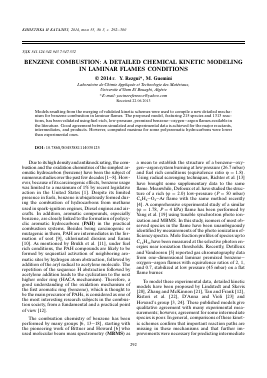 Models resulting from the merging of validated kinetic schemes were used to compile a new detailed mechanism for benzene combustion in laminar flames. The proposed model, featuring 215 species and 1313 reactions, has been validated using fuel-rich, low-pressure, premixed benzene—oxygen—argon flames available in the literature. Good agreement between simulated and experimental data is achieved for the major reactants, intermediates, and products. However, computed maxima for some polyaromatic hydrocarbons were lower than experimental ones.

Due to its high density and antiknock rating, the combustion and the oxidation chemistries of the simplest aromatic hydrocarbon (benzene) have been the subject of numerous studies over the past few decades [1—8]. However, because of its carcinogenic effects, benzene usage was limited to a maximum of 1% by recent legislative action in the United States [1]. Despite its limited presence in fuels, benzene is ubiquitously formed during the combustion of hydrocarbons from methane used in spark-ignition engines, Diesel engines and air-crafts. In addition, aromatic compounds, especially benzene, are closely linked to the formation of polycy-clic aromatic hydrocarbons (PAH) in the practical combustion systems. Besides being carcinogenic or mutagenic in them, PAH are intermediates in the formation of soot [9], chlorinated dioxins and furans [10]. As mentioned by Brukh et al. [11], under fuel rich conditions, the PAH compounds are likely to be formed by sequential activation of neighboring aromatic sites by hydrogen atom abstraction, followed by addition of the aryl radical to acetylene molecule. The repetition of the sequence H abstraction followed by acetylene addition leads to the cyclization to the next higher order ring (HACA mechanism). Therefore, a good understanding of the oxidation mechanism of the first aromatic ring (benzene), which is thought to be the main precursor of PAHs, is considered as one of the most interesting research subjects in the combustion society, from a fundamental and a practical point of view [12].

The combustion chemistry of benzene has been performed by many groups [6, 13—18], starting with the pioneering work of Bittner and Howard [6] who used molecular beam mass spectrometry (MBMS) as

a mean to establish the structure of a benzene-oxygen-argon system burning at low pressure (26.7 mbar) and fuel rich conditions (equivalence ratio 9 = 1.8). Using radical scavenging techniques, Richter et al. [13] have brought some supplementary data to the same flame. Meanwhile, Defoeux et al. have studied the structure of a rich (9 = 2.0) low-pressure (P = 50 mbar) C6H6-O2-Ar flame with the same method recently [4]. A comprehensive experimental study of a similar (9 = 1.78, P = 4 kPa) flame has been performed by Yang et al. [19] using tunable synchrotron photo ionization and MBMS. In this study, isomers of most observed species in the flame have been unambiguously identified by measurements of the photo ionization efficiency spectra. Mole fraction profiles of species up to C16H10 have been measured at the selective photon energies near ionization thresholds. Recently, Detilleux and Vandooren [5] reported gas chromatography data from one-dimensional laminar premixed benzene-oxygen-argon flames with equivalence ratios of 2, 1, and 0.7, stabilized at low pressure (45 mbar) on a flat flame burner.

To model these experimental data, detailed kinetic models have been proposed by Lindstedt and Skevis [20], Zhang and McKinnon [21], Tan and Frank [12], Ristori et al. [22], D'Anna and Violi [23] and Howard's group [3, 24]. These published models give qualitative agreement with many experimental measurements; however, agreement for some intermediate species is poor. In general, comparisons of these kinetic schemes confirm that important reaction paths are missing in these mechanisms and that further improvements were necessary for predicting intermediate

Recently, a detailed kinetic modeling study of benzene oxidation and combustion in premixed flames and ideal reactors was conducted by Vfourliotakis et al. [25] and a comprehensive mechanism was proposed. The developed kinetic scheme captured well most of the species involved in the benzene combustion, however it is limited to C6 species only and don't deal with heavier compounds. The most recent modeling work on benzene pyrolysis and oxidation was performed by Saggese et al. [26]. In this study, the proposed model, consisting ofover 10000 reactions and more than 350 species, was developed based on hierarchically modularity and was validated against a huge set of experiments.

In this work, a new model for benzene combustion in laminar flames, based on the mechanism ofVourlio-takis et al. [25] and extended to simulate C10 species, was developed. The developed kinetic mechanism was used to simulate the fuel-rich (9 = 1.8), low-pressure, premixed benzene—oxygen flame of Bittner and Howard [6] which is well-characterized, in terms of gaseous products and high molecular aromatics.

The mechanism used in this work is based on the detailed kinetic model developed by Vourliotakis et al. [25] which was assessed against experimental data issued from studies which have been conducted in flames [4—6, 19], shock tubes [27], perfectly stirred and plug-flow reactors [7, 22, 28—30], all under a wide range of temperatures, pressures, and stoichiometries. Predictive capabilities of the model were found to be at least fair and often good to excellent for the consumption of the re-actants, the formation of the main combustion products, and the formation and depletion of major intermediates including radicals. The mechanism was subsequently extended to PAH up to naphthalene (C10H8) and biphenyl (C12H10) [3, 31]. It is noteworthy that the kinetic submechanism for the formation of larger aromatic structures includes the replicating hydrogen abstraction carbon addition (HACA) mechanism as well as kinetic pathways involving resonantly stabilized free radicals.

In order to have good prediction of propargyl radical (C3H3) profiles, oxidation reactions of propy-

nylidene (1-C3H2) were added from the works [12] (in all next reactions the pre-exponential factor A is expressed in cm3 mol-1 K-1, and activation energy is expressed in J)

All model calculations were performed with PREMIX flame code, a part of the CHEMKIN software package [40]. As mentioned by D'Anna and Violi [41], the PREMIX code computes the species profiles for a burner-stabilized premixed laminar flame, using the cold mass flow rate through the burner, feed-gas composition, pressure, and an estimated solution profile as input. The program can also compute the temperature profile. However, heat losses to the burner surface and the external environment are unknown; therefore, an experimentally determined temperature profile is used as input.

Height above the burner, cm