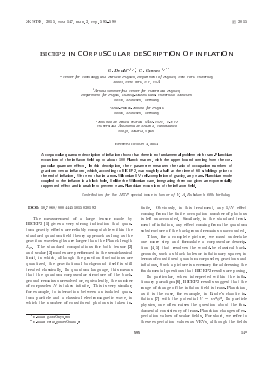 BICEP2 IN CORPUSCULAR DESCRIPTION OF INFLATION

A corpuscular quantum description of inflation shows that there is no fundamental problem with trans-Planckian excursions of the inflaton field up to about 100 Planck masses, with the upper bound coming from the corpuscular quantum effects. In this description, the r parameter measures the ratio of occupation numbers of gravitons versus inflatons, which, according to BICEP2, was roughly a half at the time of 60 e-foldings prior to the end of inflation. We stress that in a non-Wilsonian UV self-completion of gravity, any trans-Planckian mode coupled to the inflaton is a black hole. Unlike the Wilsonian case, integrating them out gives an exponentially suppressed effect and is unable to prevent trans-Planckian excursions of the inflaton field.

Cwitribvtiwi for the JETP special issue in honor of V. A. Rubakov's 60th birthday

The measurement of a large tensor mode by BICEP2 fl] gives a very strong indication that quantum gravity effects are reliably computable within the standard quantum field theory approach as long as the graviton wavelengths are larger than the Planck length Lp. The standard computations for both tensor [2] and scalar [3] modes are performed in the semiclassical limit, in which, although the graviton fluctuations are quantized, the gravitational background itself is still treated classically. In quantum language, this means that the quantum corpuscular structure of the background remains unresolved or, equivalently, the number of corpuscles N is taken infinite. This is very similar, for example, to interaction between an isolated quantum particle and a classical electromagnetic wave, in which the number of constituent photons is taken in-

Thus, for a complete picture, we must undertake one more step and formulate a corpuscular description [4,5] that resolves the would-be classical backgrounds, such as black holes or inflationary spaces, in terms of constituent quantum corpuscles, gravitons and inflatons. Such a picture is necessary for addressing the fundamental questions that BICEP2 results are posing.

In particular, when interpreted within the inflationary paradigm fC], BICEP2 results suggest that the range of change of the inflaton field is trans-Planckian, as it is the case, for example, in Linde's chaotic inflation [7] with the potential V = m2<f>2. In particle physics, one often raises the question about the fundamental consistency of trans-Planckian changes of expectation values of scalar fields. For short, we refer to these expectation values as VEVs, although the fields

arc not necessarily in the ground state. In order to answer this question, we need a microscopic theory of inflation. We address this issue within a recently formulated corpuscular theory of inflation [5], and show that the trans-Planckian change of the inflaton VEV is permitted although the range is unexpectedly strongly limited from above.

Within this description, the large tensor mode translates as a relatively large ratio of the occupation numbers of graviton and inflaton quanta that compose the would-be-classical background. As long as the Hubble volume is larger than the Planck length, the de Broglie wavelengths of constituent gravitons and infla-tons are large and they are weakly interacting. The standard results [2,3] can then be reliably reproduced from our corpuscular theory, as long as the following bound is satisfied [5]:

Here, e is the standard inflationary slow-roll parameter and Ar is the occupation number of soft gravitons that compose the classical background. For the j/r <;/-' potential, this bound translates as

where Mp is the Planck rilctSS. This upper bound conies from corpuscular effects [5] and is be explained below. From observations, m ~ 1013, and hence the upper bound is within the reliability range. We note, however, that (2) is more stringent than what we would obtain from imposing a naive semiclassical constraint on the energy density to stay below the Planck density, which instead would give <f> < Mp{Mp/m)1/'2.

We now explain this point. For deflniteness, following [5], we discuss the simplest large-field inflationary model with the potential V = nro~ [7]. It is well known that classically this system enters the inflationary regime whenever the slow-roll parameter e = Mp/ff)2 is less than one. Or, equivalently, if the inflaton VEV exceeds the Planck rilctSS. Is this a problem at the fundamental level? We address this question within the corpuscular theory, which reproduces all the known predictions, but at the same time is powerful enough to indicate whether some inconsistency arises at the fundamental level.

Within this corpuscular description, the above system, including the classical background, is viewed quantum-mechanically as being composed out of corpuscles, graviton and inflaton quanta. That is, the would-be-classical scalar and gravitational fields are

viewed as a multi-particle quantum state of inflaton and graviton Bose gases. The respective occupation numbers are given by

We note that these corpuscles are in a bound state and therefore are off-shell. However, the "off-shellness" is mild and it therefore makes perfect sense to talk about constituency. We can draw an analogy [4] with the QCD baryon as a composite of N quarks with N the number of colors, which admits a nearly classical description [8] for large N. But, unlike the baryon, which is stable, the Hubble patch is a loose union and depletes quantum mechanically. Unlike the quarks, the gravitons and inflatons can exist in the free state and the Hubble patch depletes quantum mechanically by emitting them out of the would-be-classical background.

In this picture, the classical evolution is recovered as a mean-field limit (Ar = oc, H = 0, H = finite), whereas the standard semiclassical physics in [2,3] up to \/N-corrections is recovered for N = finite, h = finite, and H = finite.

Once we have a microscopic quantum theory, we can fully handle the physical meaning of the trans-Planckian inflaton VEV. It is obvious from (3) that the physical meaning of <f> Mp is the relative increase of the inflaton occupation number. This increase would be problematic if it could result in a breakdown of the predictive power, for example, by rendering some interactions strong or expansion parameters large.

In fact, the allowed range for the <f> VEV is big enough for what is needed for accommodating chaotic inflation and deriving the density perturbations reliably at the fundamental level. On the other hand, the range is still strongly limited by (2).

To see this, we focus on reproducing density perturbations. In this framework, the density perturbations are the result of quantum depletion. Namely, due to quantum rescattering, the constituent corpuscles are systematically pushed out of the would-be ground state. The hierarchy between the scalar and tensor modes of density perturbations is the result of the different rates of scattering in graviton inflaton and graviton graviton channels. This difference is a simple consequence of the difference in occupation numbers. Since the background houses l/\ff- times more inflatons than gravitons, the depletion in the scattering channels with inflaton participation is enhanced. Correspondingly, we end up with the following expression for r parameter:

BICEP2 in corpuscular description of inflation

It is interesting that in the light of the BICEP2 data, suggesting the large value r « 0.2, the above relation tells us that at the time of 60 e-foldings prior to the end of inflation, the occupation numbers of inflatons and gravitons were different by only a factor of two. Whether there is a deeper physical meaning of this fact needs to be understood.

On the other hand, the computational range for <f> is much more narrow than what one would naively expect from the semiclassical theory, and is limited by the bound (1) [5], which for V = nroJ translates to (2).

This limit has no counterpart in the semiclassical analysis and is intrinsically quantum. This is due to the corpuscular corrections. As we said, the corpuscular picture agrees with the semiclassical treatment only up to 1/Ar corpuscular effects, per Hubble time. That is, the standard semiclassical treatment cannot fully account for the true composite nature of the background, and this amounts to an error of the order 1/Ar per each Hubble time. These corrections keep accumulating over the duration of inflation. The physical meaning of this growing correction is very transparent. Due to quantum depletion, after each Hubble time, the background is left with AN ~ 1/,/e less number of corpuscles. This change is not accounted for by the classical evolution. Thus, for each subsequent Hubble time, there is an error between the two computations (semiclassical and quantum).

This corpuscular error sums up to an order-one difference after the number of elapsed Hubble times becomes ~ Arv/e. Should the inflation be