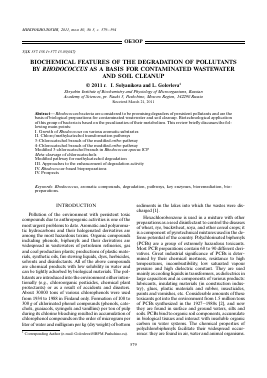 Abstract—Rhodococcus bacteria are considered to be promising degraders of persistent pollutants and are the basis of biological preparations for contaminated wastewater and soil cleanup. Biotechnological application of this group of bacteria is based on the peculiaraties of their metabolism. This review briefly discusses the following main points:

I. Growth of Rhodococcus on various aromatic substrates

3-Chlorocatechol branch of the modified ortho-pathway

III. Approaches to the enhancement of degradation activity

Pollution of the environment with persistent toxic compounds due to anthropogenic activities is one of the most urgent problems to date. Aromatic and polyaroma-tic hydrocarbons and their halogenated derivatives are among the most hazardous toxins. Organic compounds including phenols, biphenyls and their derivatives are widespread in wastewaters of petroleum refineries, gas and coal production plants; productions of plastic materials, synthetic oils, lire stewing liquids, dyes, herbicides, solvents and disinfectants. All of the above compounds are chemical products with low solubility in water and can be tightly adsorbed by biological materials. The pollutants are introduced into the environment either intentionally (e.g., chloroorganic pesticides, chemical plant protectants) or as a result of accidents and disasters. About 30000 tons of various chlorophenols were used from 1934 to 1988 in Finland only. Formation of 100 to 300 g of chlorinated phenol compounds (phenols, catechols, guaiacols, syringols and vanillins) per ton of pulp during its chlorine bleaching resulted in accumulation of chlorophenol compounds on the order of microgram per liter ofwater and milligram per kg (dry weight) ofbottom

sediments in the lakes into which the wastes were discharged [1].

Hexachlorobenzene is used in a mixture with other preparations as a seed disinfectant to control the diseases ofwheat, rye, buckwheat, soya, and other cereal crops; it is a component of pyrotechnical mixtures used in the defense potential of the country. Polychlorinated biphenyls (PCBs) are a group of extremely hazardous toxicants. Most PCB preparations contain 60 to 90 different derivatives. Great industrial significance of PCBs is determined by their chemical inertness, resistance to high temperatures, incombustibility, low saturated vapour pressure and high dielectric constant. They are used mainly as cooling liquids in transformers, as dielectrics in large capacitors and as components of various products: lubricants, insulating materials (in construction industry), glues, plastic materials and rubber, insecticides, paints and varnishes, etc. Considerable amounts of these toxicants got into the environment from 1.5 million tons of PCBs synthesized in the 1927—1980s [2], and now they are found in surface and ground waters, silts and soils. PCBs bind to organic soil components, accumulate in biological tissues and interact with insoluble organic carbon in water systems. The chemical properties of polychlorobiphenyls facilitate their widespread occurrence: they are found in air, water and animal organisms.

PCBs are extremely resistant to physical, chemical and biological changes [3]. Analysis of atmospheric air over European Russia in the recent 10—15 years has shown that the background content ofanthropogenic admixtures in it remains low. Still, it is reasonable to assume that the concentration decreases of the 1990s due to a decline in industrial production have already come to an end, and background pollution of the atmosphere by some contaminants, especially in the cold season, could be expected to increase [4].

Polycyclic aromatic hydrocarbons (PAHs) also pose a serious problem for the environment due to their remarkable toxicity, mutagenic and carcinogenic properties. The most widespread and toxic among these compounds are benz(a)pyrene (BP), acenaphthene and pyrene. As PAHs are both direct and side products of many industries, the level of their pollution in the environment is already high and constantly increases. According to the data by the Federal Agency for Hydrometeorology and Environmental Monitoring [4], the level of atmospheric pollution is still high. The degree of air pollution is estimated to be very high and high in 142 cities (69% of the cities under observation) and to be low only in 17%. In Russia as a whole, 38% of urban population reside in territories, where no observations of atmospheric pollution have been carried out, and 55% in cities with high and very high levels of atmospheric pollution (58.2 million people).

Chlorophenols, another group of toxic pollutants, are able to dissociate oxidative phosphorylation, disturb mi-crosomal detoxification and influence protein and RNA syntheses. Chlorinated biphenyls are also highly toxic compounds that can act on organisms at extremely low doses and affect the liver and kidney. Their chronic effect is similar to that of chlorine derivatives of naphthalene. They cause porphyria, i.e., activate the microsomal enzymes of the liver. This property becomes more pronounced as the content of chlorine in the molecules of chlorobiphenyls increases.

An extremely important issue is how the main classes of pollutants can be degraded. Physicochemical methods either do not ensure detoxification of chlo-rophenols or are very expensive compared to biological methods (e.g., the electron-beam method for preparation of drinking water, considered to be one of the most efficient and reliable, requires 5 kWt-h/m3 at the output capacity of 50 m3/h [5]). The same is with the incineration of chlorophenols: insufficiently high temperatures inevitably lead to immeasurably more toxic polychlo-rodioxins, and the required high temperatures make the process very expensive.

Only enzymatic dehalogenation enables degradation products of halogenated phenols, PCBs and PAHs, not hazardous for human health and the environment. As problems of environmental protection from various pollutants remain very up-to-date, great attention is paid to isolation of native strains to use them as a basis for devel-

The following several trends can be distinguished between in research into bacterial degradation of persistent toxicants. All of them ultimately aim at creating efficient technologies for biological cleanup of the environment:

1. Studies ofbacterial degradation pathways for different classes of xenobiotics. This stage includes isolation and identification of microorganisms from polluted sites, establishment of the transformation pathways of toxicants through identification of metabolites, isolation of enzymes, their comparative characterization in different groups of microorganisms.

2. Research into the genetic basis of the degradation of xenobiotics, mainly (chlorinated) (poly)cyclic aromatic compounds, bearing in mind, first of all, biodegradation plasmids and other mobile genetic elements enabling the strains to exchange biodegradation genes, which leads to expand the biodegradation potential of bacteria inhabiting the Earth.

3. Use of native bacterial preparations for efficient elimination of pollutions.

4. Selection of hybrid strains with extended biode-gradability. Construction of plasmids that carry the genes of different pathways, making it possible to overcome the "bottlenecks" of biodegradation in decomposing persistent pollutants; protein engineering for changing the catalytic properties of particular enzymes.

5. Development of biopreparations and introduction of(hybrid) strains into the regions with high levels ofpol-lution, enabling a decrease of local pollutions (including the critical level).

Rhodococcus bacteria are an interesting and biotech-nologically promising group of microorganisms: polluted sites and water bodies are often their natural habitats. They are stable inhabitants of ecosystems even under starvation conditions; degradation of pollutants by these organisms is not affected by the presence of more accessible carbon sources. Rhodococcal cells are hydrophobic due to the aliphatic chains of mycolic acids in their cell wall, which enables them to degrade hydrophobic pollutants through adhesion in the oil/water interface. Some rhodococcal strains are psychrophilic, which is highly significant for bioremediation in cold climates. These bacteria can degrade the broadest range of aromatic compounds [6—8]. Representatives of the genus are reported to be able to carry out various transformation reactions with potential industrial applications [9]. According to the data by Martinkova et al., the number of publications and patents on nitriles and aromatic compounds transformed by rhodococci has increased significantly after 1995 [8].

The goal of this review is to give the basic ideas of metabolic potential and biochemical basis of Rhodococcus biodegradation activity. We discuss methods of adapting cultures to degrade high concentrations of new substrates (both individual compounds and mixtures containing v