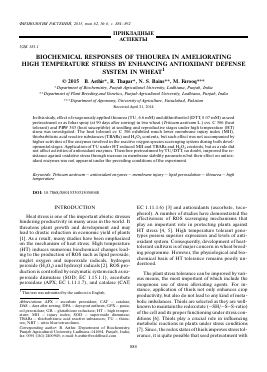 In this study, effect of exogenously applied thiourea (TU, 6.6 mM) and dithiothreitol (DTT, 0.07 mM) as seed pretreatment or as foliar spray (at 90 days after sowing) in two wheat (Triticum aestivum L.) cvs. C 306 (heat tolerant) and PBW 343 (heat susceptible) at seedling and reproductive stages under high temperature (HT) stress was investigated. The heat tolerant cv. C 306 exhibited much lower membrane injury index (MII), thiobarbituric acid reactive substances (TBARs) and H2O2 contents, but such effect was not accompanied by higher activities of the enzymes involved in the reactive oxygen species scavenging system during both developmental stages. Application of TU under HT reduced MII and TBARs and H2O2 contents, but as a rule did not affect activities of antioxidant enzymes. Therefore pretreatment by TU/DTT, no doubt, improved the resistance against oxidative stress through increase in membrane stability parameters but their effect on antiox-idant enzymes was not apparent under the prevailing conditions of the experiment.

Heat stress is one of the important abiotic stresses hindering productivity in many areas in the world. It threatens plant growth and development and may lead to drastic reduction in economic yield of plants [1]. As a result, many studies have been emphasized on the mechanism of heat stress. High temperature (HT) induces numerous biochemical changes leading to the production of ROS such as lipid peroxide, singlet oxygen and superoxide radicals, hydrogen peroxide (H2O2) and hydroxyl radicals [2]. ROS production is controlled by enzymatic system such as superoxide dismutase (SOD; EC 1.15.1.1), ascorbate peroxidase (APX; EC 1.11.1.7), and catalase (CAT;

EC 1.11.1.6) [3] and antioxidants (ascorbate, tocopherol). A number of studies have demonstrated the effectiveness of ROS scavenging mechanisms that play an important role in protecting plants against HT stress [4, 5]. High temperature tolerant genotypes possess superior expression and levels of anti-oxidant system. Consequently, development of heat-tolerant cultivars is of major concern in wheat breeding programme. However, the physiological and biochemical basis of HT tolerance remains poorly understood.

The plant stress tolerance can be improved by various means, the most important of which include the exogenous use of stress alleviating agents. For instance, application of thiols not only enhances crop productivity, but also do not lead to any kind of metabolic imbalances. Thiols are selected as they are well-known to maintain the redox state (-SH/—S—S-ratio) of the cell and its proper functioning under stress conditions [6]. Thiols play a crucial role in influencing metabolic reactions in plants under stress conditions [7]. Since, the redox states of thiols improves stress tolerance, it is quite possible that seed pretreatment with

external thiols might result in switching on some metabolic processes in order to combat oxidative stress. Improvement in plant growth and development under different stresses due to application of thiourea (TU) has been observed in crops like maize [8], wheat [9—11], pearl millet [12], cluster bean [13], and Brassica [14]. Our work published earlier [11] emphasized the role of TU under HT stress on photosynthetic tissue (flag

In the present study, we evaluated the effect of TU/DTT at early stage of seedling (root, shoot) and during reproductive stage (grains) to see how two different stages are affected under the influence of HT.

Plant material and growth conditions. Seeds of two wheat (Triticum aestivum L.) cvs. C 306 (tolerant) and PBW 343 (susceptible) were obtained from the Department of Plant Breeding and Genetic, Punjab Agricultural University, Ludhiana, Punjab, India. Seeds were surface sterilized with 1% HgCl2 for 1 min, rinsed thoroughly with distilled water and imbibed in distilled water, thiourea (TU, 6.6 mM) or dithiothreitol (DTT 0.07 mM) for 6 h and germinated at 25°C (normal) and 32°C (high temperature, HT) in Petri dishes (9.0 cm) on double layer Whatman 1 filter paper moistened with 5 mL of distilled water. Twenty seedlings were used in each experiment and each experiment was repeated in triplicates. A seed was considered to have germinated when its radical emerged at least 5 mm.

The experiment was divided in four sets. One set of seeds was grown at 25 ± 1°C in continuous dark conditions in Petri plates containing germination paper moistened with 4 mL of distilled water. Second set was maintained to a continuous HT (32 ± 1°C) in an incubator under dark. Third set of seeds were soaked for 6 h in TU or DTT and then raised at 25 ± 1°C in continuous dark conditions, and fourth set of seedlings were soaked in TU or DTT as depicted in set three but maintained at continuous HT (32 ± 1°C) conditions. Uniform sized wheat seedlings were sampled after sixth day of germination, and the measurements were performed on root and shoot in triplicates.

For studies on developing grains, two genotypes PBW 343 and C 306 pretreated with TU (6.6 mM), i.e seed soaking at the time of sowing, followed by foliar spray at 90 days after sowing (DAS) were raised under normal (16 Nov 2010) and late planting (11 Dec 2010) conditions in plots and the mean temperature during grain development for two sowing period varied between 4—6°C. Each plot consisted of 4 rows of 1 m each. Row to row spacing was maintained at 23 cm and the material was sown in three replications. There were three replications for each determination and the developing grains were collected at 7, 14, 21, 28, and 35 days post anthesis (DPA) for metabolite determination and enzyme analysis.

Determination of membrane injury index (MII). 0.5 g fresh tissue was excised and washed with distilled water to remove adhering electrolytes. The tissue was then immersed in test tubes containing 20 mL of distilled water. After 24 h the MII was estimated by conductivity meter at 25°C. The sample was

then boiled for 30 min and conductivity was measured again. Membrane injury index was calculated as a ratio of electrical conductivity before and after boiling and was expressed in percentage.