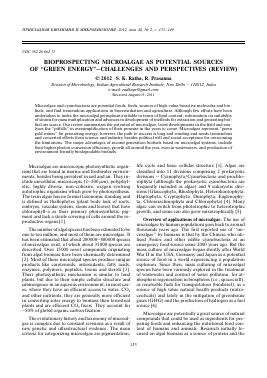 Microalgae and cyanobacteria are potential foods, feeds, sources of high-value bioactive molecules and biofuels, and find tremendous applications in bioremediation and agriculture. Although few efforts have been undertaken to index the microalgal germplasm available in terms of lipid content, information on suitability of strains for mass multiplication and advances in development of methods for extraction and generating biofuel are scarce. Our review summarizes the potential of microalgae, latest developments in the field and analyzes the "pitfalls" in oversimplification of their promise in the years to come. Microalgae represent "green gold mines" for generating energy; however, the path to success is long and winding and needs tremendous and concerted efforts from science and industry, besides political will and social acceptance for overcoming the limitations. The major advantages of second generation biofuels based on microalgal systems, include their higher photon conversion efficiency, growth all around the year, even in wastewaters, and production of environment friendly biodegradable biofuels.

Microalgae are microscopic photosynthetic organisms that are found in marine and freshwater environments, besides being prevalent in soil and air. They include unicellular, microscopic (2—200 ^m), polyphyl-etic, highly diverse, non-cohesive, oxygen evolving autotrophic organisms which grow by photosynthesis. The term algae has no formal taxonomic standing and is defined as thallophytes (plant body lack of roots, embryos, vascular system, stems and leaves) that have chlorophyll-a as their primary photosynthetic pigment and lack a sterile covering of cells around the reproductive organs [1].

The number of algal species has been estimated to be one to ten million, and most of them are microalgae. It has been estimated that about 200000—800000 species of microalgae exist, of which about 35000 species are described. Over 15000 novel compounds originating from algal biomass have been chemically determined [2]. Most of these microalgal species produce unique products like carotenoids, antioxidants, fatty acids, enzymes, polymers, peptides, toxins and sterols [3]. Their photosynthetic mechanism is similar to land plants, but due to their simple cellular structure and submergence in an aqueous environment, in most cases, where they have an efficient access to water, CO2 and other nutrients, they are generally more efficient in converting solar energy to biomass than terrestrial plants and are efficient CO2 fixers. They account for ~50% of global organic carbon fixation.

The evolutionary history and taxonomy of microal-gae is complex due to constant revisions as a result of new genetic and ultrastructural evidence. The main criteria for categorizing microalgae are pigmentation,

life cycle and basic cellular structure [1]. Algae are classified into 11 divisions comprising 2 prokaryotic divisions — Cyanophyta/Cyanobacteria and prochlo-rophyta (although the prokaryotic cyanobacteria are frequently included as algae) and 9 eukaryotic divisions (Glaucophyta, Rhodophyta, Heterokontophyta, Haptophyta, Cryptophyta, Dinophyta, Euglenophy-ta, Chlorarachniophyta and Chlorophyta) [4]. Many algae can switch from phototrophic to heterotrophic growth, and some can also grow mixotrophically [5].

Overview of applications of microalgae. The use of

microalgae by human populations goes back to around thousands years ago. The first reported use of ''microalgae'' by humans is that by the Chinese who utilised Nostoc and other edible cyanobacteria as an emergency food source some 2000 years ago. But the mass culture of microalgae began shortly after World War II in the USA, Germany and Japan as a potential source of food in a world experiencing a population explosion. Since then, mass culturing of microalgal species have been variously explored in the treatment of wastewater and control of water pollution, for atmosphere regeneration in biospheres (i.e., spacecraft), as renewable fuels for transportation (biodiesel), as a source of high value natural health products (nutra-ceuticals) and lately in the mitigation of greenhouse gases (GHG) and the production of hydrogen as a fuel source [6].

Microalgae are potentially a great source of natural compounds that could be used as ingredients for preparing foods and enhancing the nutritional food content of humans and animals. Research initially focused on algal biomass as a source of protein and the

Table 1. Selected microalgal species with their products and application areas

systematic examination of algae for biologically active compounds and pharmaceuticals. The high protein content of various microalgal species is one of the main reasons to consider them as unconventional sources of protein. As their cells are capable of synthesizing all amino acids, they can provide the essential ones to humans and animals. They also represent a valuable source of nearly all essential vitamins (e.g., A, B1, B2, B6, B12, C, E, nicotinate, biotin, folic acid and pantothenic acid) [7]. Vitamins improve the nutritional value of algal cells but their quantity fluctuates with environmental factors, the harvesting treatment and the method of drying the cells [9]. They are also rich in pigments like chlorophyll (0.5% to 1% of dry weight), carotenoids (0.1% to 0.2% of dry weight on average and up to 14% of dry weight for P-carotene of Dunaliella) and phycobiliproteins. Carbohydrates in microalgae can be found in the form of glucose, starch and polysaccharides. Their overall digestibility is high, which is why there is no limitation to using dried whole microalgae in foods or feeds. The average lipid content of algal cells varies between 1% and 70% but can reach 90% of dry weight under certain conditions [8]. More recently, algae have been used successfully to produce biodiesel, polyunsaturated fatty acids (PUFA), such as docosahexaenoic and eicosapentaenoic acids. Different compounds with anti-bacterial, anti-viral

and anti-fungicidal activity can be found in these types of organisms [8—11]. The most frequently used mi-croalgae belong to Cyanophyceae (cyanobacte-ria/blue-green algae), Chlorophyceae (green algae), Bacillariophyceae (including the diatoms) and Chrys-ophyceae (including golden algae). A list of selected microalgal species with their products and applications is given in Table 1.

Significance of biofuels. Energy is an indispensable factor to sustain our economic growth and quality of living standards. A rapidly growing world population and rising consumption of fossil fuels is increasing the demand for both food and biofuels [23], which can lead to energy shortage. Producing biofuels requires huge amounts of both fossil energy and food resources, which will intensify conflicts among these resources. Global warming is caused by indiscriminate use of resources, in particular of fossil fuel for a variety of human needs and is largely responsible for climate change. The current definition of progress is largely confined to economic well being ofhumankind dictated by access to modern technologies, which are driven by modern energy carriers. Along with the increased demands of the burgeoning populations, the production and use of fossil fuel based energy sources has led to the degradation of the environment.

Among the GHG, which are responsible for global warming, CO2 is the most prominent one. According to information given in World Energy Outlook-2009 of the International Energy Agency (IEA), the energy sector contributes 84% of global CO2 emissions and 64% of the world's GHG emissions. If no action is initiated, the contributions will increase to about 91% of the global CO2 emissions by 2030 and the share in GHG emissions is likely to reach 71%. In an absolute sense, energy-related emissions are expected to increase from 28.8 Gt in 2007 to 40.2 Gt in 2030. To limit the global average temperature increase of 2°C, the concentration of GHG in the atmosphere has to be stabilized at a level