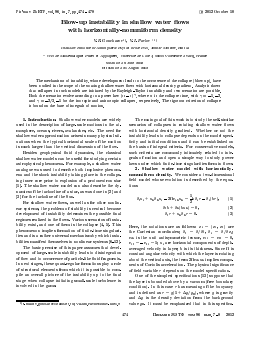 The mechanisms of instability, whose development leads to the occurrence of the collapse (blow up), have been studied in the scope of the rotating shallow water flows with horizontal density gradient. Analysis shows that collapses in such models are initiated by the Rayleigh-Taylor instability and two scenarios are possible. Both the scenarios evolve according to a power law (to — t)1, where to is the collapse time, with 7 = —1, —2, and 7 = —2/3, —1 for the isotropic and anisotropic collapses, respectively. The rigorous criterion of collapse is found on the base of integrals of motion.

1. Introduction. Shallow water models are widely used in the description of large-scale motions in the atmosphere, oceans, rivers, avalanches, etc. The need for shallow water approximation arises in many physical situations when the typical horizontal scale of the motion is much larger than the vertical dimension of the flow.

Besides geophysical fluid dynamics, the classical shallow water models can be useful for studying certain astrophysical phenomena. For example, a shallow water analogue was used to describe both implosive phenomena and the shock instability taking place in the collapsing inner core prior to explosion of a protoneutron star [1]. The shallow water model can also describe the dynamics of the tachocline of a star, as was done in [2] and [3] for the tacholine of the Sun.

For shallow water flows, as well as for other nonlinear systems, the problem of stability is central because development of instability determines the possible final regimes realized in the flows. Various scenarios of instability exist, and one of them is the collapse [4, 5]. This phenomenon implies formation of finite-time singularities and is a rather universal mechanism by which instabilities manifest themselves in nonlinear systems [6-12].

The basic premise of this paper assumes that development of large-scale instability leads to disintegration of flow and to occurrence of particle-like fluid fragments. In next stages, these quasi-regular formations play a role of structural elements from which it is possible to compile an overall picture of the instability up to the final stage when collapse initiating small-scale turbulence is involved in the game.

The main goal of this work is to study the self-similar scenarios of collapses in rotating shallow water flows with horizontal density gradient. Whether or not the instability leads to collapse depends on the model specificity and initial conditions and it can be established on the basis of integral criteria. For conservative models, such criteria are commonly intimately related to integrals of motion and open a simple way to study power laws under which finite-time singularities form in flows.

2. Shallow water model with horizontally-nonuniform density. We consider a two-dimensional field model whose evolution is described by the equations

Here, the notations are as follows: Xi = (xi, »2) are the Cartesian coordinates; dt = d/dt, di = d/dx Bik is the unit antisymmetric tensor, en = 622 = 0, ei2 = —621 = 1; Ui are horizontal components of depth-averaged velocity in layer; h is its thickness. Since 0 is constant angular velocity with which the layer is rotating about the vertical axis, the term 20eikuk implies components of Coriolis acceleration. The physical significance of field variable r depends on the model specification.

One of the simplest specifications [13] suppose that the layer is bounded above by a vacuum (free boundary condition). In this case r has meaning of the buoyancy and is defined as r = g( 1 + Ag/g0), where g is gravity and A^ is the density deviation from the background value £?o • It must be emphasized that in this specifica-

tion r, just as the thickness h, is only a positive function of the horizontal coordinates and time.

Note that in the case when Ag = 0, so that r = g is constant, Eqs. (l)-(3) reduce to the usual shallow water equations describing motion under the influence of gravity g.

The next specification removing the restriction r > > 0 can be justified within the framework of two-layer model. As shown in Figure, this model supposes that

The shallow water model with a relative buoyancy of alternating sign

two incompressible fluids with densities go and go + are separated by surface z = h(xi,x2,t) and contained between two rigid parallel planes z = 0 and z = I. If the horizontally-nonuniform density jump Ag between the fluids is small and the lower layer is sufficiently thin, so inequalities Ag/g0 -C 1 and h/l -C 1 hold, then the shallow water approximation again leads us to Eqs. (1)-(3). These equations describe depth-averaged flow only in the lower layer, but now the variable r = gAg/g0 is the relative buoyancy and therefore may take any sign.

In those cases when density variations are produced only by temperature ones AT and are linearly connected, the relative buoyancy can be computed as r = = —g0AT, where 0 is thermal expansion coefficient. This parametrization allows to study heating and cooling effects in shallow water models (see, as an example, [14-16]).

In order to understand how the fluid moves as a whole, it is helpful to consider the evolution of the center of mass. Since integral of total mass

is constant, we can find directly from Eqs. (l)-(3) that coordinates of the center of mass X,- and components of the total momentum P.- defined as

are governed by the equations

Equations (5) can be easily integrated to obtain

where X0i, X02 are integration constants, and the modulus of momentum P0 = |P| is the constant of motion.

3. Integral criteria for collapses. Suppose that the development of instability leads to the formation of a singularity in a point. This means that with the lapse of time, almost the entire fluid is localized in the vicinity of this point. Thus, the collapse point coincides with the center of mass and it is natural to describe collapsing fluid fragments in the center of mass reference frame x', where the collapse point x' = 0 is immovable.

which leaves invariant Eqs. (l)-(3), in order not to change the notations, it is possible to put from the very beginning that P = 0 and X = 0.

As an indicator of the isotropic collapse, we will use the positive definite integral

which has a very simple physical meaning of the moment of inertia with respect to the center of mass. Here and elsewhere we will assume that integrals are taken over the whole area occupied by a collapsing fluid fragment.

which have meaning of the kinetic moment and the virial for the fluid, obey a closed system of equations

where the total energy

Equations (10) can be integrated to obtain

where to and Vq are two more constants of motion

The isotropic collapse implies a specific temporal evolution when the positive quantity I decreases with increasing t and reaches the value I = 0 at a point t = to > 0 in the final stage.

this condition is the criterion for collapse in the rotating shallow water models with a horizontally-nonuniform density.

and using (12), we can rewrite inequality (13) in an equivalent form

is the positive definite quantity which can be treated as the kinetic energy in the rotating frame reference.

Thus, the isotropic collapse occurs if n < 0. The only way to provide this condition is by appropriately choosing the initial distribution for field r which, unlike h, can be signalternating. Negative values of n indicate directly that the collapse is initiated by the Rayleigh-Taylor instability.

4. Power laws of self-similar collapses. As known [17], self-similar solutions are intermediate as-ymptotics of non-degenerate problems and are very useful in studying the final stages of strongly nonlinear

processes, when the system forgets about details related to the initial data and its behavior depends on the integrals of motion.