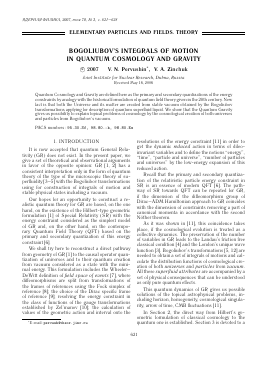 BOGOLIUBOV'S INTEGRALS OF MOTION IN QUANTUM COSMOLOGY AND GRAVITY

Quantum Cosmology and Gravity are defined here as the primary and secondary quantizations of the energy constraints by analogy with the historical formulation of quantum field theory given in the 20th century. New fact is that both the Universe and its matter are created from stable vacuum obtained by the Bogoliubov transformations applying for description of quantum superfluid liquid. We show that the Quantum Gravity gives us possibility to explain topical problems of cosmology by the cosmological creation of both universes and particles from Bogoliubov's vacuum.

It is now accepted that quantum General Relativity (GR) does not exist. In the present paper, we give a set of theoretical and observational arguments in favor of the opposite opinion: GR [1,2] has a consistent interpretation only in the form of quantum theory of the type of the microscopic theory of superfluidity [3—5] with the Bogoliubov transformations using for construction of integrals of motion and stable physical states including a vacuum.

Our hopes for an opportunity to construct a realistic quantum theory for GR are based, on the one hand, on the existence of the Hilbert-type geometric formulation [1] of Special Relativity (SR) with the energy constraint considered as the simplest model of GR and, on the other hand, on the contemporary Quantum Field Theory (QFT) based on the primary and secondary quantization of this energy constraint [6].

We shall try here to reconstruct a direct pathway from geometry of GR [1] to the causal operator quantization of universes and to their quantum creation from vacuum considered as a state with the minimal energy. This formulation includes the Wheeler— DeWitt definition of field space of events [7], where diffeomorphisms are split from transformations of the frames of references using the Fock simplex of reference [8]; the choice of the Dirac specific frame of reference [9]; resolving the energy constraint in the class of functions of the gauge transformations established by Zel'manov [10]; the calculation of values of the geometric action and interval onto the

resolutions of the energy constraint [11] in order to get the dynamic reduced action in terms of difeo-invariant variables and to define the notions "energy", "time", "particle and universe", "number of particles and universes" by the low-energy expansion of this reduced action.

Recall that the primary and secondary quantization of the relativistic particle energy constraint in SR is an essence of modern QFT [6]. The pathway of SR towards QFT can be repeated for GR, if the dimension of the diffeomorphism group of Dirac—ADM Hamiltonian approach to GR coincides with the dimension of constraints removing a part of canonical momenta in accordance with the second No ther theorem.

As it was shown in [11], this coincidence takes place, if the cosmological evolution is treated as a collective dynamics. The preservation of the number of variables in GR leads to the Landau's friction free classical condition [4] and the London's unique wave function [3]. Bogoliubov's transformations [5, 12] are needed to obtain a set of integrals of motions and calculate the distribution functions of cosmological creation of both universes and particles from vacuum. All these superfluid attributes are accompanied by a set of physical consequences that can be understood as only pure quantum effects.

In Section 2, the direct way from Hilbert's geometric formulation of classical cosmology to the quantum one is established. Section 3 is devoted to a

similar quantization of Einstein—Hilbert's GR in the spirit of the microscopic theory of superfluidity.

2. QUANTUM COSMOLOGY 2.1. Foundation of General Relativity Einstein's GR [2] is based on the dynamic action

In the WDW cosmology this gauge symmetry means that the scale factor p is the time-like variable in the field space of events introduced by Wheeler and DeWitt in [7], and the canonical momentum Pp is the corresponding Hamiltonian that becomes the energy Ep into equations of motion.

The direct historical pathway from SR to QFT of particles [6] shows us a similar direct pathway from Hilbert's "Foundation of Cosmology" (4), (5) to "QFT" of universes. This pathway includes: 1. Hamiltonian approach:

where Mplanck is the inverse coupling Newton constant in units h — c = 1. This action is given in a Riemannian space—time manifold with geometric interval

In order to demonstrate to a reader the direct pathway from Einstein—Hilbert's "Foundation of Physics" [1] to QFT of universes, we consider GR in the homogeneous approximation of the interval

is treated as the energy of a universe,

7. Cosmological creation of the universes from the Bogoliubov vacuum.

Let us carry out this programme in detail.

where Hilbert's action (1) and interval (2) take the form

Here, a(x°) is the cosmological scale factor, p(x°) = = p0a(x0), p0(p) is the energy density of the matter in a universe, V0 is a spatial volume, and N0 is the lapse function. This homogeneous approximation keeps the symmetry of the action and the interval with respect to reparametrizations of the coordinate evolution parameter x ^ x — x 0(x0). Recall that similar diffeomorphisms in the case of SR leads to energy constraint determining observable quantities of the type of energy, time-like variable and number of particles in quantum theory.

In the cosmological model (6), there are two independent equations: the one of the lapse function

treated as the energy constraint, and the equation of momentum ¿5cosmic/5PP = 0,

where Ep (7) is identified with the one-universe energy. The substitution of these solutions into action (6) and interval (5) gives us their values

respectively. We called these values the Hamiltonian reduction of the geometric system (6), (5). Equation (12) is treated, in the observational cosmology [13, 14], as the conformal version of the Hubble law. This law describes the relation between the redshift z + + 1 = p0/p(n) of spectral lines of photons (emitted by atoms on a cosmic object at the conformal time n(p\p0) = n) and the coordinate distance r = no — n of this object, where n0 is the present-day moment. Thus, we see that WDW cosmology coincides with the Friedmann one p'2 = p0(p). Our task is to consider the status of this Friedmann cosmology in QFT of universes obtained by the first and the secondary quantization of the constraint (8).

After the primary quantization of the cosmological scale factor p: i[Pp, p] = 1, the energy constraint (8) transforms to the WDW equation

Introducing the canonical momentum P* = = dLU/d(dpty), one can obtain the Hamiltonian form of this theory

is the Hamiltonian. The concept of the one-universe energy Ep gives us the opportunity to present this Hamiltonian HU in the standard forms of the product of this energy Ep and the number of universes:

by means of the transition to the holomorphic variables

This equation can be obtained in the corresponding classical WDW field theory for universes of the type of the Klein—Gordon one:

The last term in (20) is responsible for the cosmolog-ical creation of universes from vacuum.

In order to define stationary physical states, including a vacuum, and a set of integrals of motion, one usually uses the Bogoliubov transformations [5, 12] of the holomorphic variables of universes

so that the classical equations of the field theory in terms of universes:

The diagonal form is possible, if the Bogoliubov coefficients a, 3 in (22) satisfy to equations