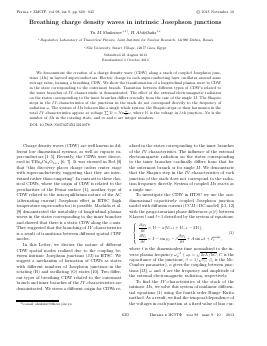 We demonstrate the creation of a charge density wave (CDW) along a stack of coupled Josephson junctions (JJs) in layered superconductors. Electric charge in each superconducting layer oscillates around some average value, forming a breathing CDW. We show the transformation of a longitudinal plasma wave to CDW in the state corresponding to the outermost branch. Transition between different types of CDW's related to the inner branches of IV-characteristic is demonstrated. The effect of the external electromagnetic radiation on the states corresponding to the inner branches differs crucially from the case of the single JJ. The Shapiro steps in the IV-characteristics of the junctions in the stack do not correspond directly to the frequency of radiation u. The system of JJs behaves like a single whole system: the Shapiro steps or their harmonics in the total TV-characteristics appear at voltage Vj = Nr^ui, where VJ is the voltage in /-th junction, Nr is the number of JJs in the rotating state, and m and n are integer numbers.

Charge density waves (CDW) are well known in different low dimensional systems, as well as cuprate superconductors [1-5]. Recently, the CDWs were discovered in YBa2Cu3O6+a; [6, 7]. It was stressed in Ref. [8] that "this discovery places charge orders center stage with superconductivity, suggesting that they are intertwined rather than competing". In contrast to these classical CDWs, where the origin of CDW is related to the peculiarities of the Fermi surface [1], another type of CDW related to the non-equilibrium nature of the AC (alternating current) Josephson effect in HTSC (high temperature superconductor) is possible. Machida et al. [9] demonstrated the instability of longitudinal plasma waves in the states corresponding to the inner branches and showed that there is a static CDW along the c-axis. They suggested that the branching of /^-characteristics is a result of transitions between different spatial CDW modes.

In this Letter, we discuss the nature of different CDW spatial modes realized due to the coupling between intrinsic Josephson junctions (JJ) in HTSC. We suggest a mechanism of formation of CDWs as states with different numbers of Josephson junctions in the rotating (R) and oscillating (O) states [10]. Two different types of breathing CDW related to the outermost branch and inner branches of the /^-characteristics are demonstrated. We stress a different origin for CDWs re-

alized in the states corresponding to the inner branches of the /^-characteristics. The influence of the external electromagnetic radiation on the states corresponding to the inner branches cardinally differs from that for the outermost branch or for single JJ. We demonstrate that the Shapiro step in the /^-characteristics of each junction of the stack does not correspond to the radiation frequency directly. System of coupled JJs reacts as a single one.

To investigate the CDW in HTSC we use the one-dimensional capacitively coupled Josephson junction model with diffusion current (CCJJ+DC model) [11, 12] with the gauge-invariant phase differences <l (t) between S-layers l and l + 1 described by the system of equations:

where t is the dimensionless time normalized to the inverse plasma frequency w-1 ( wp = ^2eIc/hC, C is the capacitance of the junctions, /3 = l/V/3^, /?c is the Mc-Cumber parameter), a gives the coupling between junctions [13], w and A are the frequency and amplitude of the external electromagnetic radiation, respectively.

To find the /^-characteristics of the stack of the intrinsic JJs, we solve this system of nonlinear differential equations (1) using the fourth order Runge-Kutta method. As a result, we find the temporal dependence of the voltages in each junction at a fixed value of bias cur-

rent I. Then the current value is increased or decreased by a small amount of SI (bias current step) to calculate the voltages in all junctions at the next point of the IV-characteristics. So actually time dependence of voltage in each junction or charge in each layer consists of intervals at each fixed current value. We use the distribution of phases and voltages achieved at the previous point of the IV-characteristics as the initial distribution for the current point. The average of the voltage Vi is given by Vi = Tf1_T. Vidt where Tj and Tf determine the interval for the temporal averaging. Total voltage in the stack is determined as a sum of these voltages. In our simulations we measure the voltage in units of V0 = hwp/(2e), the frequency in units of wp, and the bias current I in units of Ic. Time dependence of the electric charge in the superconducting layers is investigated by Maxwell equation div(eeoE) = Q.

The charge density Qi (in the following text referred to as charge) in the S-layer l is proportional to the difference between the voltages Vl and Vl+1 in the neighbor insulating layers Ql = Q0a(Vl+1 — Vl), where Q0 = ee0V0/r2D. Numerical calculations have been done for a stack with 10 Josephson junctions, the coupling parameter a = 1, dissipation parameter ¡3 = 0.2 and periodic boundary conditions. Coupling between junctions leads to the creation of the rotating (the time average of dy(l)/dt is constant and that of sin[y(l)] is zero) and oscillating (the time average of dy(l)/dt is zero and that of sin[y(l)] is constant) states [10]. The O-state is one of the new elements which appear in IJJ in comparing with one JJ. The O-state can be realized if number of junctions in the stack is more than two. In all calculations a noise with the amplitude Inoise = 10~8 generated by a random number generator was added to the bias current. The amplitude of noise was normalized to the critical current Ic. Details of the model and simulation procedure can be found in Ref. [14].

Let us first consider results related to the transition from the outermost branch (all junctions in R-state) to inner branch (some junctions in O-state). Such a transition happens in the resonance region, where a longitudinal plasma wave (LPW) with a definite wave number is created. In the parametric resonance region [15] we observe the charge oscillations corresponding to the n-mode of the LPW (see inset in Fig. 1a).

In Fig. 1a we show the Q(t) dependence together with the IV characteristics (thin curve with diamond symbols) near transition from the outermost branch to an inner branch with three JJs in the R-state (branch number 3 in Fig. 1c). The Q(t) dependence shown, is characterized by exponential increase of the charge in the S-layers in the parametric resonance region (char-

Fig. 1. (Color online) (a) - Charge in the S-layers as a function of time together with the TV-characteristics (curve with the diamond symbols related to the right and upper axes) near transition from the outermost branch to inner branch 3. The dashed line passing through the current symbol stresses that the system is in the CDW-state. The inset shows the LPW oscillations (^-mode). (b) -The enlarged part of the Q(t) dependence demonstrating the transition LPW ^ CDW. (c) - One-loop TV-characteristics for the same stack. The arrows show the directions of bias current changes throughout the simulation

acter of charge oscillations in two first layers is shown in the inset to Fig. 1a), some transition region, and by oscillations of different amplitude around different average values in each superconducting layer of the stack. To simplify the picture, we show the charge oscillations in three layers only. So, the branch 3 corresponds to the state with a CDW: the electric charge in each superconducting layer oscillates around some average value forming a breathing CDW along the stack. To stress this fact we plot in Fig. 1a the dashed line passing through the current symbol corresponding to the current value I = 0.57675. We note that the transition from one branch to the other is a result of the phase dynamics of the system, and it is not related directly to the change of the bias current value. The dynamical transition from the outermost branch to branch 3 happens in one time domain, i.e. at one step in bias current be-

tween I = 0.57680 and 0.57675. Intermediate values of voltage between two branches correspond practically to the formed CDW, and their values depend on the time interval which the system spent in the formed state.

Figure 1b illustrates the enlarged part of the Q(t) dependence around the transition from the LPW to the CDW state corresponding to the outermost branch (all JJs in R-state). The CDW forms in the current interval with initial current value related to the outermost branch. We can distinguish four different regions here. Before point A the system is in the state with LPW. Then, in region A-B we can see the breathing CDW, when the charge in odd layers breaths around positive average va