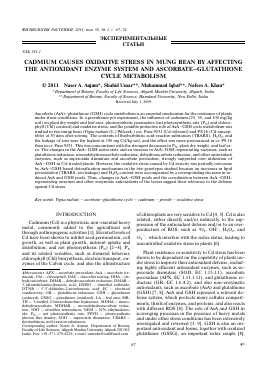 Ascorbate (AsA)-glutathione (GSH) cycle metabolism is an essential mechanism for the resistance of plants under stress conditions. In a greenhouse pot experiment, the influence of cadmium (25, 50, and 100 mg/kg soil) on plant dry weight and leaf area, photosynthetic parameters (net photosynthetic rate (PN) and chlorophyll (Chl) content) and oxidative stress, and the possible protective role of AsA—GSH cycle metabolism was studied in two mung bean (Vigna radiate (L.) Wilczek.) cvs. Pusa 9531 (Cd-tolerant) and PS 16 (Cd-susceptible) at 30 days after sowing. The contents of thiobarbituric acid-reactive substances (TBARS), H2O2, and the leakage of ions were the highest at 100 mg Cd/kg soil, and the effect was more pronounced in cv. PS 16 than in cv. Pusa 9531. This was concomitant with the strongest decreases in PN, plant dry weight, and leaf area. The changes in the AsA—GSH redox state and an increase in AsA-GSH-regenerating enzymes, such as glutathione reductase, monodehydroascorbate reductase, dehydroascorbate reductase, and other antioxidant enzymes, such as superoxide dismutase and ascorbate peroxidase, strongly supported over-utilization of AsA—GSH in Cd-treated plants. However, the oxidative stress caused by Cd toxicity was partially overcome by AsA-GSH-based detoxification mechanism in the two genotypes studied because an increases in lipid peroxidation (TBARS, ion leakage) and H2O2 content were accompanied by a corresponding decrease in reduced AsA and GSH pools. Thus, changes in AsA—GSH pools and the coordination between AsA-GSH-regenerating enzymes and other enzymatic antioxidants of the leaves suggest their relevance to the defense against Cd stress.

Cadmium (Cd) is a phytotoxic non-essential heavy metal, commonly added to the agricultural soil through anthropogenic activities [1]. Elevated levels of Cd have been shown to inhibit seed germination, cell growth, as well as plant growth, nutrient uptake and distribution, and net photosynthesis (PN) [2—4]. PN and its related variables, such as stomatal behavior, chlorophyll (Chl) biosynthesis, electron transport, enzymes of the Calvin cycle, and also the ultrastructure

of chloroplasts are very sensitive to Cd [4, 5]. Cd is also related, either directly and/or indirectly, to the suppression of the antioxidant defense and/or to an overproduction of ROS, such as 1O2, OH", H2O2, and

O2-, which interfere with the redox status, leading to uncontrolled oxidative stress in plants [6].

Plant resistance or sensitivity to Cd stress has been shown to be dependent on the capability of plants under stress to improve their antioxidant defense, including highly efficient antioxidant enzymes, such as superoxide dismutase (SOD, EC 1.15.1.1), ascorbate peroxidase (APX, EC 1.11.1.11), and glutathione reductase (GR, EC 1.6.4.2), and also non-enzymatic antioxidants, such as ascorbate (AsA) and glutathione (GSH) [7, 8]. AsA and GSH represent a relevant defense system, which protects many cellular compartments, thiols of enzymes, and proteins, and also reacts with different ROS [8]. The role of AsA and GSH in scavenging processes in the presence of heavy metals and under other stress conditions has been extensively investigated and reviewed [3, 9]. GSH is also an important antioxidant and forms, together with oxidized glutathione (GSSG), an important redox couple [8],

which provides plants with conditions for key metabolic activities through interacting with NADP/NADPH and/or NAD/NADH [8, 9]. GSH also takes part in thioredoxin-related regulation of many enzymes of photosynthetic metabolism [9]. In addition, the concentration of GSH and the ratio of GSH to GSSG largely interfere with the ability of GSH to participate in the redox regulation of various cellular processes. Glutathione reductase (GR) is the last important enzyme of the Halliwell—Asada pathway and maintains the high GSH/GSSG ratio required for the regeneration ofAsA and for the activation of several CO2-fixing enzymes [7]. Dehydroascorbate reductase (DHAR, EC 1.8.5.1) allows plants to recycle dehydroascorbate (DHA), thereby recapturing AsA before it is lost, using GSH as the reductant. Because AsA and GSH are the major reductants in plants, DHAR and GR serve to regulate their redox state; SOD and APX convert superoxides and H2O2 into H2O2 and H2O, respectively. In addition, the maintenance ofAsA and GSH in a reduced state under stress conditions has the relevance to plant tolerance to biotic and abiotic stress factors [9]. Earlier, we have reported a strong and positive relationship of AsA and GSH contents to plant dry weight and PN in Brassica campestris [3].

Although there are several reports on Cd-induced changes in various aspects of plant growth and development, there is a shortage of literature with regard to the role of AsA—GSH pools and the coordination of their regenerating enzymes with other enzymatic anti-oxidants in the protection of leguminous crop plants against Cd-enhanced oxidative stress.

Therefore, this study was undertaken to investigate the differences in the effect of increasing Cd level in soil on growth, photosynthesis, and AsA—GSH cycle metabolism. The study also analyzes the differences in the coordination between enzymatic antioxidants (SOD and APX) and AsA—GSH-regenerating enzymes (GR, MDHAR, and DHAR) in the protection of mung bean genotypes, Pusa 9531 and PS 16, which differ in Cd-tolerance.

Plant material and growth conditions. Mung bean (Vigna radiate (L.) Wilczek., genotypes Pusa 9531 and PS 16) seeds were sown in earthen pots 40 cm in diameter filled with 8 kg of soil. The soil was sandy loam in texture with pH 7.8, electrical conductivity (EC) of 3.8 ds/m, organic carbon of 0.43%, and available potassium (K) of 70 ppm. Sufficient amounts of nitrogen (N), phosphorus (P), K, and sulfur (S) at the rate of 120, 30, 80, and 40 mg/kg soil, respectively, were applied at the time of sowing in the form of urea, single superphosphate, muriate of potash, and gypsum, respectively. The soil was mixed with appropriate amount of CdCl2 to supply 0, 25, 50, and 100 mg Cd/kg soil. The treatments were laid out in a randomized complete block design, with three replications.

Measurements of growth and photosynthetic traits.

Plant dry weight was recorded after plant drying for 48 h to a constant weight at 80°C. Leaf area (LA) was measured by a leaf area meter (LI-3000A, United States). PN was measured on fully expanded third leaf from the top using infrared gas analyzer (LI-6400, United States) at 9:00—11:00 a.m. at light saturating intensity. The content of Chls (a and b) was estimated based on the DMSO method, according to Hiscox and Israel-stam [10].

The contents of reduced (GSH) and oxidized (GSSG) glutathione were estimated following the method of Anderson [11]. Fresh leaves (0.5 g) were homogenized in 2.0 ml of5% sulfosalicylic acid under cold conditions. The homogenate was centrifuged at 10000 g for 10 min. To 0.5 ml of the supernatant, 0.6 ml of K-phosphate buffer (100 mM, pH 7.0) and 40 |l of 5',5'-dithiobis-2-ni-trobenzoic acid (DTNB) were added. After 2 min, the absorbance was recorded at 412 nm on a Lambda Bio 20UV-VIS spectrophotometer ("Perkin Elmer", United States). GSSG was assayed by the same method in the presence of 2-vinylpyridine, and the GSH concentration was calculated from the difference between total glutathione and GSSG.