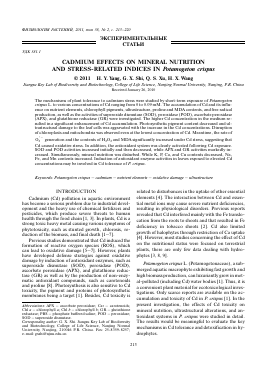 The mechanisms of plant tolerance to cadmium stress were studied by short-term exposure of Potamogeton crispus L. to various concentrations of Cd ranging from 0 to 0.09 mM. The accumulation of Cd and its influence on nutrient elements, chlorophyll pigments, ultrastructure, proline and MDA contents, and free radical production, as well as the activities of superoxide dismutase (SOD), peroxidase (POD), ascorbate peroxidase (APX), and glutathione reductase (GR) were investigated. The higher Cd concentration in the medium resulted in a significant enhancement of Cd accumulation. Photosynthetic pigment content decreased and ultrastructural damage to the leaf cells was aggravated with the increase in the Cd concentrations. Disruption of chloroplasts and mitochondria was observed even at the lowest concentration of Cd. Meantime, the rate of

Cadmium (Cd) pollution in aquatic environment has become a serious problem due to industrial development and the heavy use of chemical fertilizers and pesticides, which produce severe threats to human health through the food chain [1, 3]. In plants, Cd is a strong toxic heavy metal causing various symptoms of phytotoxicity, such as stunted growth, chlorosis, reduction of the biomass, and final death [1—7].

Previous studies demonstrated that Cd induced the formation of reactive oxygen species (ROS), which can lead to oxidative damage [5—7]. However, plants have developed defense strategies against oxidative damage by induction of antioxidant enzymes, such as superoxide dismutase (SOD), peroxidase (POD), ascorbate peroxidase (APX), and glutathione reductase (GR) as well as by the production of non-enzymatic antioxidant compounds, such as carotenoids and proline [8]. Photosynthesis is also sensitive to Cd toxicity, the pigment and proteins of photosynthetic membranes being a target [1]. Besides, Cd toxicity is

related to disturbances in the uptake of other essential elements [4]. The interaction between Cd and essential metal ions may cause severe nutrient deficiencies, resulting in physiological disorders. Previous reports revealed that Cd interfered mainly with the Fe translocation from the roots to shoots and that resulted in Fe deficiency in tobacco shoots [2]. Cd also limited growth of halophytes through restriction of Ca uptake [4]. However, most studies concerning the effect of Cd on the nutritional status were focused on terrestrial plants, there are only few data dealing with hydrophytes [3, 8, 9].

Potamogeton crispus L. (Potamogetonaceae), a submerged aquatic macrophyte exhibiting fast growth and high biomass production, can luxuriantly grow in metal-polluted (including Cd) water bodies [1]. Thus, it is a convenient plant material for ecotoxicological investigations. Only scarce reports are available on the accumulation and toxicity of Cd in P. crispus [1]. In the present investigation, the effects of Cd toxicity on mineral nutrition, ultrastructural alterations, and an-tioxidant systems in P. crispus were studied in detail. The results would be meaningful to evaluate the key mechanisms in Cd tolerance and detoxification in hydrophytes.

Plant materials and treatments. The Potamogeton crispus L. plants were collected from unpolluted bodies of freshwater and acclimated for more than 6 months in large hydroponic tubes. Subsequently, the growing shoots were cut off from the mother plants, washed thrice with running tap water and grown in aquaria with 0.1-strength Hoagland solution for two weeks at the day/night temperature of 25/20°C, light irradiance of 114 ^mol/(m2 s), and photoperiod of 14 h. These plants approximately of the same height and weight were then transferred to glass beakers. Various concentrations levels of Cd2+ (0, 0.03, 0.05, 0.07, and 0.09 mM) were supplied to the plants as CdCl2 in 2 l of 0.1-strength Hoagland solution for 6 days. Beakers were then placed in growth chamber under the conditions described above. All solutions were refreshed every 2 days, and all experiments were performed in triplicates.

Measurement of O^- generating rate. The rate of

O2 generation was determined following Elstner and Heupel [14] with some modifications. 0.5 g of fresh leaves was ground with 4 ml of 65 mM potassium phosphate buffered saline (PBS) (pH 7.8) and centri-fuged at 5000 g for 10 min. One milliliter of the supernatant was mixed with 0.9 ml of 65 mM potassium PBS (pH 7.8) and 0.1 ml of10 mM hydroxylamine hydrochloride, and incubated at 25°C for 20 min. After incubation, 17 mM sulfanilamide and 7 mM naphth-ylamine were added to the above mixture, and the mixtures were incubated at 25°C for 20 min. The light absorbance was measured at 530 nm with a Thermo GENESYS 10 spectrophotometer (United States).

Photosynthetic pigment assay. For measuring chlorophyll and carotenoid content, 0.2 g fresh samples were extracted with 80% acetone and absorbances at 470, 647, and 663 nm were recorded by a Thermo

GENESYS 10 spectrophotometer (United States). The contents of chlorophyll a (Chl a), chlorophyll b (Chl b), and carotenoids (Car) were determined according to Lichtenthaler [18].

Electron microscopy. Samples from leaves of control and Cd-treated plants of P. crispus were initially fixed for 2 h at 4°C in 2.5% glutaraldehyde in 0.1 M PBS (pH 7.3) and postfixed in 1% aqueous osmium tetroxide for 2 h. Samples were dehydrated through an ethanol series and finally embedded in the Epon 812 resin. Ultrathin sections of 70 nm were cut using an Ultracut E ultramicrotome ("Leica", Germany) with a diamond knife and then stained with 2% uranyl acetate and lead citrate before examination with a Hitachi H-600 transmission electron microscope ("Hitachi", Japan).

Statistical analysis. All assays were carried out in triplicates, and results were expressed as means ± SD. Statistical treatment was performed with the ANOVA test in Statistical Analysis System (STATISTICA 6.0). To calculate the significance ofvalues, means were separated by Duncan's Multiple Range test at P < 0.05.

Effects of Cd on the element contents

Cadmium bioaccumulation was observed in P. crispus leaves as a function of its concentration (table 1). Cadmium was accumulated up to 1409 ^g/g in P. cris-pus plants, which grew in culture medium containing 0.09 mM Cd. A linear model was the best to explain the relation between Cd concentration in the medium and the Cd accumulated (r = 0.99, P < 0.01).

Effects of Cd on the activities of antioxidant enzymes