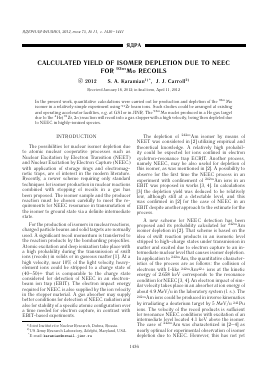 CALCULATED YIELD OF ISOMER DEPLETION DUE TO NEEC

In the present work, quantitative calculations were carried out for production and depletion of the 93mMo isomer in a relatively simple experiment using 91 Zr beam ions. Such studies could be arranged at existing and operating accelerator facilities, e.g. at GSI or in JINR. The 93mMo nuclei produced in a He gas target due to the 4He(91Zr, 2n) reaction will recoil into a gas stopper with a high velocity, being then depleted due to NEEC in highly-ionized species.

The possibilities for nuclear isomer depletion due to atomic nuclear cooperative processes such as Nuclear Excitation by Electron Transition (NEET) and Nuclear Excitation by Electron Capture (NEEC) with application of storage rings and electromagnetic traps, are of interest in the modern literature. Recently, a newer scheme requiring only standard techniques for isomer production in nuclear reactions combined with stopping of recoils in a gas has been proposed. The isomer sample and the producer reaction must be chosen carefully to meet the requirements for NEEC resonance in transmutation of the isomer to ground state via a definite intermediate state.

For the production of isomers in nuclear reactions, charged particle beams and solid targets are normally used. A significant recoil momentum is transferred to the reaction products by the bombarding projectiles. Atomic excitation and deep ionization take place with a high probability during the transmission of swift ions (recoils) in solids or in gaseous matter [1]. At a high velocity, near 10% of the light velocity, heavy-element ions could be stripped to a charge state of (40—50)+ that is comparable to the charge state considered for detection of NEEC in an electron-beam ion trap (EBIT). The electron impact energy required for NEEC is also supplied by the ion velocity in the stopper material. A gas absorber may supply better conditions for detection of NEEC radiation and also for stability of a specific atomic configuration over a time needed for electron capture, in contrast with EBIT-based experiments.

The depletion of 242mAm isomer by means of NEET was considered in [2] utilizing empirical and theoretical knowledge. A relatively high probability could be expected for ions confined in electron cyclotron-resonance trap ECRIT. Another process, namely NEEC, may be also useful for depletion of this isomer, as was mentioned in [2]. A possibility to observe for the first time the NEEC process in an experiment with confinement of 242mAm ions in an EBIT was proposed in works [3, 4]. In calculations [3] the depletion yield was deduced to be relatively low, although still at a detectable level, and this was confirmed in [2] for the case of NEEC in an EBIT despite another approach to the estimate for the process.

A new scheme for NEEC detection has been proposed and its probability calculated for 242mAm isomer depletion in [2]. That scheme is based on the idea of swift reaction products in an isomeric level stripped to high-charge states under transmission in matter and excited due to electron capture to an intermediate nuclear level that causes isomer depletion. In application to 242mAm, the quantitative characteristics of the process are as follows: the collision of electrons with I-like 242mAm42+ ions at the kinetic energy of 2.658 keV corresponds to the resonance condition for NEEC [3, 4]. An electron impact of similar velocity takes place in an absorber at ion energy of about 4.9 MeV/u in the laboratory system (l. s.). The 242mAm ions could be produced in inverse kinematics by irradiating a deuterium target by 5 MeV/u 241 Pu ions. The velocity of the recoil products is sufficient for resonance NEEC conditions with excitation of an intermediate level located 4.1 keV above the isomer. The case of 242mAm was characterized in [2—4] as nearly optimal for experimental observation of isomer depletion due to NEEC. However, this has not yet

Fig. 1. General scheme of the di-electronic recombination (DR) process. An electron is absorbed from a specific state in the continuum into a bound-shell vacancy, followed by excitation of a previously-bound electron.

been detected in real irradiations using either an EBIT [4] or the recoil stopping scheme [2].

In the present work, we describe the case of 93mMo isomer as a candidate for depletion by NEEC via stopping in a gas. This isomer is attractive for NEEC because the potential intermediate level is located at only 4.8 keV above the isomer, similar to the 242mAm case. For 93Mo the released energy past depletion is much higher — of about 2.42 MeV, i.e. 45 times larger as compared to 242mAm. The 93mMo isomer was mentioned earlier in the context of possible experiments using an EBIT [4]. But the newer scheme of depletion under stopping is now developed for this nucleus.

For swift ions, an electron capture resulting in NEEC is an analogy to the known atomic process of di-electronic recombination (DR). A very simplified illustration of DR is shown in Fig. 1. The NEEC and DR processes are similar in general scenario: the only difference is that the energy released in electron capture is spent for nuclear excitation in NEEC, but for electron excitation due to DR.

1. RESONANCE CONDITIONS FOR NEEC IN THE COURSE OF ION STOPPING

The currently-proposed experimental scheme for detection of NEEC is displayed in Fig. 2. The recoil nucleus transmits through a gas degrader and its velocity is systematically decreased. After some distance the resonance conditions for NEEC are reached and this is shown as a resonance range within the gas stopper. In practice, the resonance coordinate distribution might be wide due to the velocity spread of the recoils and the variation of the ion charge state throughout the gas. For instance, in the case of 242mAm, NEEC to the 5p3/2 orbital in a 42+-charged americium ion may happen at another velocity in higher-charged states of this ion when this orbital remains vacant.

The resonance conditions for NEEC are described schematically in Fig. 3. Behavior of the values of

Fig. 2. Layout of a setup for experimental detection of the reaction-recoil excitation due to NEEC over stopping in a gas cell.

Fig. 3. S chematic illustration of the following parameters dependent on the stopping range L: (a) Ion velocity v and equilibrium charge q(v) shown by curves 1 and 2, respectively; (b) electron-capture energy Ee (curve 1) containing the sum of the electron binding energy Be (curve 2) and the electron kinetic energy Ekin in the ion rest frame (curve 3); (c) resonance in the NEEC probability due to matching of the electron capture energy and the nuclear-transition energy En. The crossing of bold lines in Fig. 3b defines a position of the NEEC resonance in L scale that is shown also by bold line in Fig. 3c.

interest as a function of the stopping distance L is shown qualitatively in the linear scale without a numerical definition. When the ion velocity is reduced in a gas absorber, the equilibrium charge is simultaneously decreased. Correspondingly, the kinetic energy, Ekin, of the bombarding electron in the ion rest frame is diminished. The electron binding energy, Be, is also decreased because the ion charge, q(v), is reduced as a function of the velocity. A resonance takes place when the total energy of recombination Ee = (Ekin + Be) becomes equalto the excitation

Fig. 4. Partial nuclear level schemes for93Mo and 242 Am isotopes, according to [5, 6]. The level and transition energies are given in keV.

energy of the nuclear level, En. The velocity v and q(v) functions are shown in Fig. 3a, the kinetic, potential, and total energies of a bombarding electron in Fig. 36, and resonance coordinate distribution in Fig. 3c. Crossing of the bold lines in Fig. 36 defines the position of NEEC resonance on the scale of the stopping range. The resonance curve is shown also by the bold line in Fig. 3c. Resonance conditions may occur multiple times for a single ion over stopping in the gas. The charge state fluctuates due to the electron capture and loss by an ion in the medium and multiple resonance events happen.

A nuclear radiation detector should be installed near the "resonance range" coordinate to measure prompt gamma emission accompanying events of isomer depletion by NEEC. Thus far, no experimental attempts have been performed to explore the survival of isomers under stopping of reaction products. The depletion rate could be negligible for many isomers, yet manifested in some special cases. The scheme is advantageous because each ion at some point in the degrader will obtain the resonance velocity required for NEEC, despite a velocity spread.

An isomer for a concrete experiment within the stopping scheme could be selected from 242mAm or 93mMo. Both could be produced in a gas target irradiated by accelerated heavy ions: 2H(241 Pu, n) and 4He(91 Zr, 2n), respectively. The isomeric recoils possess enough velocity for NEEC resonance under stopping in a gas absorber. In the table, resonance parameters are given for definite nuclear and atomic transitions in these cases. Such conditions provide NEEC in greatly stripped ions of the recoiled isomeric species. T