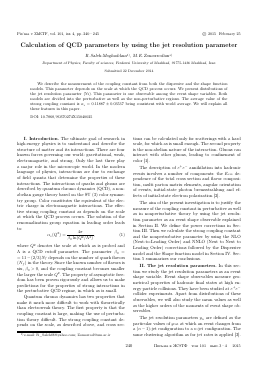 Calculation of QCD parameters by using the jet resolution parameter

We describe the measurement of the coupling constant from both the dispersive and the shape function models. This parameter depends on the scale at which the QCD process occurs. We present distributions of the jet resolution parameter (Y3). This parameter is one observable among the event shape variables. Both models are divided into the perturbative as well as the non-perturbative regions. The average value of the strong coupling constant is as = 0.11887 ± 0.03537 being consistent with world average. We will explain all these features in this paper.

I. Introduction. The ultimate goal of research in high-energy physics is to understand and describe the structure of matter and its interactions. There are four known forces governing our world: gravitational, weak, electromagnetic, and strong. Only the last three play a major role in the microscopic world. In the modern language of physics, interactions are due to exchange of field quanta that determine the properties of these interactions. The interactions of quarks and gluons are described by quantum chromo dynamics (QCD), a non-abelian gauge theory based on the SU (3) color symmetry group. Color constitutes the equivalent of the electric charge in electromagnetic interactions. The effective strong coupling constant as depends on the scale at which the QCD process occurs. The solution of the renormalization group equation in leading order leads to:

where Q2 denotes the scale at which as is probed and A is a QCD cutoff parameter. The parameter /?o = = 11 — (2/3)Nf depends on the number of quark flavors (Nf) in the theory. Since the known number of flavors is six, /?o > 0, and the coupling constant becomes smaller the larger the scale Q2. The property of asymptotic freedom has been proven rigorously and allows us to make predictions for the properties of strong interactions in the perturbative QCD regime, in which as is small.

Quantum chromo dynamics has two properties that make it much more difficult to work with theoretically than electroweak theory. The first property is that the coupling constant is large, making the use of perturbation theory difficult. The strong coupling constant depends on the scale, as described above, and cross sec-

tions can be calculated only for scatterings with a hard scale, for which as is small enough. The second property is the non-abelian nature of the interaction. Gluons can interact with other gluons, leading to confinement of color [1].

The aim of the present investigation is to justify the measure of the coupling constant in perturbative as well as in nonperturbative theory by using the jet resolution parameter as an event shape observable explained in Section II. We define the power corrections in Section III. Then we calculate the strong coupling constant and the nonperturbative parameter by using the NLO (Next-to-Leading Order) and NNLO (Next to Next to Leading Order) corrections followed by the Dispersive model and the Shape function model in Section IV. Section 5 summarizes our conclusions.

The jet resolution parameters yn are defined as the particular values of ycut at which an event changes from a (n — l)-jet configuration to a n-jet configuration. The same clustering algorithm as for jet rates is applied [3].

We propose using the Durham algorithm (k± algorithm) for jets produced in the deep inelastic hadron scattering process. On the theoretical side this implies the presence of large order corrections that cannot be resumed; on the experimental side the trouble is that ghost jets may appear, i.e., jets along directions where no particles are present. To cure this problem the Durham algorithm was introduced, which is based on the following definition of the test variable [4]. The following distance measures are used for Durham algorithm for every pair of hadrons hk and hi compute the corresponding relative transverse momentum:

predictions. The prediction for the moment on hadron level will be [7]:

where Ek and Ei denote the energy of the final-state, by вы the angle between the momenta of hadrons. Take the smallest value among El and Ef. If уц is the smallest value уы computed and уы < yCut combine (Pi,Pj) into a single pre-cluster (pseudo particle) Pij = Pi + Pj according to a recombination prescription. For resolving jet structure, we define a resolution parameter ycut = Ql/E^is < 1. Repeat this procedure until all pairs of objects (particle and/or pseudo particles) have уы > yCut- Whatever objects remain at this stage are called jets (к algorithm). Clearly the resolution criterion y^, > ycut becomes, for small angles, Щ,к > £^isi/cut, where ктк is the transverse momentum of the k-th particle to the direction of the Z-th one. In this way the algorithm tries to minimize the transverse momentum and not the invariant mass. On the other hand the recombination scheme is still given by Pij [4, 5]. In this article, we use г/^з variable, which we call уз. Now we present power corrections for this event shape variable. By using the power correction, we can calculate the coupling constants in the perturbative and in the nonperturbative part of theory.

III. Power corrections. The n-th moment of an event shape observable у is defined by:

Утах is the kinematically allowed upper limit of the observable [6]. By naively neglecting the integration over the unphysical range of negative variable values, we obtain:

Discarding the integration over the kinematically forbidden values of y. This leads to the nonperturbative

IV. Measurements of coupling constants. The

QCD running of as implies that the effective coupling as(Q) is small at high energy Q. This property justifies the use of perturbation theory for predicting jet observables, at least at asymptotic energies. Measurements of the strong coupling constant (as) are obtained by different observables, and different analysis methods serve as an important consistency test of QCD. as is measured at a given scale, QCD predicts its energy dependence as described by the renormalization group equation [7]. A coupling constant is a number that determines the strength of the force exerted in an interaction. For electromagnetism, the coupling constant is related to the electric charge through the fine structure constant. If the coupling constant gets very large compared to unity, perturbation theory becomes useless, because higher powers of the expansion parameter are bigger, not smaller, than lower powers. This is called a strongly coupled theory. Coupling constants in quantum field theory end up depending on energy because of quantum vacuum effects. A quantum field theory can be weakly coupled at low energies and strongly coupled at high energies, as is true with the fine structure constant a in QED, or strongly coupled at low energies and weakly coupled at high energies, as is true with the coupling constant for quark and gluon interactions in QCD.

The analytical power ansatz for nonperturbative corrections by Dokshitzer and Webber [8, 9] including the Milan factor established by Dokshitzer [10, 11] is used to determine as from mean event shapes. This ansatz provides an additive term to the perturbative O(o2s) QCD prediction [12]:

In the following we calculate the strong coupling constant in perturbative region as well as the nonperturbative parameters by using different models.

Calculations in perturbative QCD have been found to give fairly accurate descriptions of cross sections up to Next-to-Leading Order for a lot of different reactions. The next step to a complete comprehension of QCD is the understanding of the non-perturbative parts.

Perturbative QCD is (and continues to be) well tested, and QCD studies have entered the precision era, i.e. experiments are sensitive to genuine Quantum Field Theory effects. Each order in the perturbative series in helps to increase the reliability of QCD predictions. Next-to-Leading Order theory includes only the perturbative theory. The mean value of the jet resolution variable as an event shape observable in the perturbative prediction is: