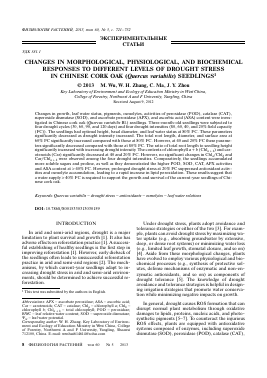 Changes in growth, leaf water status, pigments, osmolytes, activities of peroxidase (POD), catalase (CAT), superoxide dismutase (SOD), and ascorbate peroxidase (APX), and ascorbic acid (ASA) content were investigated in Chinese cork oak (Quercus variabilis Bl.) seedlings. Three-month-old seedlings were subjected to four drought cycles (30, 60, 90, and 120 days) and four drought intensities (80, 60, 40, and 20% field capacity (FC)). The seedlings had optimal height, basal diameter, and leaf water status at 80% FC. These parameters significantly decreased as drought intensity increased. The total root length, diameter, and surface area at 60% FC significantly increased compared with those at 80% FC. However, at 40 and 20% FC these parameters significantly decreased compared with those at 80% FC. The ratio of total root length to seedling height significantly increased with increasing drought intensity. The contents of chlorophyll a + b (Chla + b) and car-otenoids (Car) significantly decreased at 40 and 20% FC. However, no significant changes in Chla/Chlb and Car/Chla + b were observed among the four drought intensities. Comparatively, the seedlings accumulated more soluble sugars and proline, as well as they demonstrated the higher POD, SOD, CAT, APX activities and ASA content at > 40% FC. However, prolonged drought stress at 20% FC suppressed antioxidant activities and osmolyte accumulation, leading to a rapid increase in lipid peroxidation. These results suggest that a water supply > 40% FC is required to support the growth and survival of the current-year seedlings of Chinese cork oak.

Under drought stress, plants adopt avoidance and tolerance strategies or either of the two [3]. For example, plants can avoid drought stress by maximizing water uptake (e.g., absorbing groundwater by extensive, deep, or dense root systems) or minimizing water loss (e.g., limited leaf growth, stomatal closure, and so on) [4]. Aside from these morphological changes, plants have evolved to employ various physiological and biochemical processes (e.g., synthesis of protective solutes, defense mechanisms of enzymatic and non-enzymatic antioxidants, and so on) as components of drought tolerance [5]. The knowledge of drought avoidance and tolerance strategies is helpful in designing irrigation strategies that promote water conservation while minimizing negative impacts on growth.

and ascorbate peroxidase (APX), as well as non-enzymatic antioxidants, such as ascorbic acid (ASA), glutathione, tocopherol, and carotenoids [8, 9]. As two of the most important compatible solutes in plants, soluble sugars and proline play important roles in drought tolerance strategies [7]. They stabilize membranes and maintain protein conformation at low leaf water potentials [7]. Moreover, they act as effective hydroxyl radical scavengers in vitro [7]. Previously, it has been reported that some plants adapt to water stress by altering the activities of various antioxidants or by performing osmotic adjustment; however, most studies only focused on two or three drought stress regimes [3, 10, 11]. In addition, the manner, by which oak seedlings change their morphological, physiological, and biochemical properties under different drought stress levels and periods, remains unclear.

Chinese cork oak (Quercus variabilis Bl.) is a deciduous broad leaf tree in East Asia (12° to 42° N and 96° to 140° E); it plays a key role in soil remediation, erosion control, and in the economical and ecosystemic development in China, Korea, and Japan [12]. In the arid and semi-arid regions of Northwestern China, Chinese cork oak is often used in cork production, tannin extraction, and edible fungi cultivation [12]. In recent decades, overexploitation has led to the destruction and degradation of Chinese cork oak habitat in the arid and semi-arid regions of Northwestern China [13]. These regions are characterized by low precipitation and high evaporation. Thus, they are not conducive for the regeneration of tree species. Although a high number of germinating seeds of Chinese cork oak have been observed in natural habitats (e.g., the Loess Plateau), only a few strong current-year seedlings have been found [14, 15].

In the present study, we measured a set of selected morphological, physiological, and biochemical responses of Chinese cork oak seedlings to different drought stress intensities. The present study aims (1) to assess the manner, by which Chinese cork oak seedlings conduct morphological, physiological, and biochemical modifications to adapt to progressive drought stress environments, and (2) to identify the possible threshold value in soil water content. The results of the present study provide sufficient informa-

Plant material and growth conditions. Seeds were collected at the end of August and at the beginning of October 2009 in Huanglong Mountain, which is located at approximately 223 km north of Xi'an City in Northwestern China (109°38'-110°16' E, 35°24'-36°02' N, altitude 962.5 m to 1 783.5 m). The study site has a mean annual temperature of 8.6°C, a mean annual rainfall of 611.8 mm, and a mean annual evaporation of 1585.9 mm. Deformed and damaged seeds were discarded. After air-drying, healthy seeds were stored at 0 to 4°C throughout winter. Surface soil was collected from the study area and then mixed with the collected sandy loam and humic soils (1 : 2 : 1, v/v/v). The soil mixture was used as the substrate for each pot. It was weighed to approximately 12.4 kg/pot and then watered. Water was allowed to evaporate naturally until the weight of the soil was constant. The water holding capacity was determined by obtaining the difference between the soil wet weight and the soil dry weight. At 100% field capacity (FC), the mean water content of the soil was 34%. The chemical properties were as follows: pH 7.42; organic matter - 46.89 g/kg; total N - 1.48 g/kg; total P - 0.82 g/kg; and total K -28.47 g/kg.

In 2010, the experiment was conducted in a temperature-controlled greenhouse at the Research Station for Vegetable Sciences, Northwest Agriculture, and Forestry University, Shaanxi Province, China (34°16'56.24" N, 108°4'27.95" E), where the temperatures were maintained at 25°C (07:30 UT to 19:30 UT) and 14°C (19:30 UT to 07:30 UT). During the experiment, the relative humidity inside the chamber was 65 ± 5%. The mean photosynthetic photon flux density (PPFD) inside the greenhouse was approximately 66% of the mean PPFD outside. On March 7, 2010, the seeds were soaked in deionized water for 24 h before germination on moist pledget. On March 21, 2010, germinating, healthy, and uniform seeds were selected, and five of each were sown into each plastic pot (28 cm x 32 cm, height x diameter, a total of 10 plastic pots). A total of 10 pots were well watered (soil moisture was approximately 80% FC) to ensure healthy seedling growth. Seedlings 6 cm in height with approximately two leaves were selected and then planted onto a uniform plant/pot (one seedling per pot, a total of 24 pots). The drought treatment was initiated on May 28, 2010.

Experimental design. The experiment was arranged in a completely randomized design