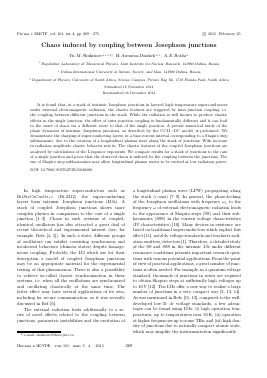 It is found that, in a stack of intrinsic Josephson junctions in layered high temperature superconductors under external electromagnetic radiation, the chaotic features are triggered by inter-junction coupling, i.e. the coupling between different junctions in the stack. While the radiation is well known to produce chaotic effects in the single junction, the effect of inter-junction coupling is fundamentally different and it can lead to the onset of chaos via a different route to that of the single junction. A precise numerical study of the phase dynamics of intrinsic Josephson junctions, as described by the CCJJ+DC model, is performed. We demonstrate the charging of superconducting layers, in a bias current interval corresponding to a Shapiro step subharmonic, due to the creation of a longitudinal plasma wave along the stack of junctions. With increase in radiation amplitude chaotic behavior sets in. The chaotic features of the coupled Josephson junctions are analyzed by calculations of the Lyapunov exponents. We compare results for a stack of junctions to the case of a single junction and prove that the observed chaos is induced by the coupling between the junctions. The use of Shapiro step subharmonics may allow longitudinal plasma waves to be excited at low radiation power.

In high temperature superconductors such as Bi2Sr2CaCu208+5 (Bi-2212) the superconducting layers form intrinsic Josephson junctions (IJJs). A stack of coupled Josephson junctions shows more complex physics in comparison to the case of a single junction [1-3]. Chaos in such systems of coupled, identical oscillators has also attracted a great deal of recent theoretical and experimental interest (see, for example, Refs. [4, 5]). In such a state, different groups of oscillators can exhibit coexisting synchronous and incoherent behaviors (chimera states) despite homogeneous coupling. Probably, the IJJ which use for their description a model of coupled Josephson junctions may be an appropriate material for the experimental testing of this phenomenon. There is also a possibility to achieve so-called chaotic synchronization in these systems, i.e. when all the oscillations are synchronized and oscillating chaotically at the same time. The latter effect may have several applications of its own, including for secure communication, as it was recently discussed in Ref. [6].

The external radiation leads additionally to a series of novel effects related to the coupling between junctions, parametric instabilities and the excitation of

a longitudinal plasma wave (LPW) propagating along the stack (c-axis) [7-9]. In general, the phase-locking of the Josephson oscillations with frequency ujj to the frequency uj of external electromagnetic radiation leads to the appearance of Shapiro steps (SS) and their sub-harmonics (SSS) in the current voltage characteristics (IV-characteristics) [10]. Many devices in existence are based on traditional superconductors which exploit this effect [11]; notably voltage standards and terahertz radiation emitters/detectors [1]. Therefore, a detailed study of the SS and SSS in the intrinsic JJs under different resonance conditions presents important research questions with various potential applications. From the point of view of practical applications, a great number of junctions is often needed. For example, in a quantum voltage standard, thousands of junctions in series are required to obtain Shapiro steps at sufficiently high voltages up to 10 V [12]. The IJJs offer a new way to realize a large number of junctions in a very compact way [2, f3, 14]. As was mentioned in Refs. [15, 13], compared to the well-developed low-Tc dc voltage standards, a few advantages can be found using IJJs: (i) high operation temperatures, up to temperatures near 50 K; (ii) operation at higher frequencies up to some THz; and (iii) high density of junctions due to naturally compact atomic scale, which may simplify the instrumentation significantly.

In this paper we present results on the effects of electromagnetic radiation on the phase dynamics of the intrinsic JJs and the temporal oscillations of the electric charge in the superconducting layers. For fixed parameters of JJs and parameters of simulations, we have studied the "charging" of the Shapiro step subharmon-ics in the I—^-characteristics, i.e. the charging of superconducting layers in the corresponding bias current intervals at fixed amplitude of external radiation. To escape the complexity related to the overlapping of the SS subharmonics, we consider here cases of small radiation amplitudes. With increase in the amplitude of the radiation a chaotic behavior is demonstrated. Comparison of the obtained results for stack of junctions with a case of single Josephson junction allows us to prove that the observed chaos is triggered by the coupling between junctions. An essential difference of the parametric instabilities in case of subharmonics and Shapiro step harmonics is a lower amplitude of radiation needed for the creation of the longitudinal plasma wave. This fact gives a unique possibility to create and control the longitudinal plasma wave in layered superconductors. It might be important for future applications.

In Ref. [9] it was shown that the variation of the amplitude and frequency of external electromagnetic radiation changes the wavelength of the longitudinal plasma in high temperature superconductors. This sensitivity to the external radiation might play an important role for the synchronization of Josephson oscillations in the stack [16] and paves the way for increasing the power of electromagnetic radiation in the terahertz region. However, there are still many open questions concerning the excitation of the longitudinal plasma wave. One such question, which requires further investigation, is related to the possibility of exciting the LPW at low power of radiation. Here we demonstrate that the use of SS subharmonics is one way to realize this possibility. For our calculations we used the well-known methods described in Ref. [17, 18].

To calculate the I—^-characteristics of the stack of the intrinsic J J, we solve the system of nonlinear second-order differential equations (the one-dimensional CCJJ+DC model) for gauge-invariant phase differences <fii(t) between S-layers I and / + 1 in the presence of electromagnetic irradiation:

where t is the dimensionless time normalized to the inverse plasma frequency w^1, wp = y/2eIc/HC, C is

the capacitance of the junctions, /3 = 1/a/A:, Pc is the McCumber parameter, a gives the coupling between junctions [7], and A is the amplitude of the radiation. To reflect the experimental conditions we add noise in the bias current. The noise is produced by random number generator (white noise) and its amplitude is normalized to the critical current value Ic [18].

In our simulations the fourth (also fifth) order Runge-Kutta method was used. We measure the voltage in units of Vo = hujp/(2e), the frequency in units of ujp, the bias current I and the amplitude of radiation A in units of Ic. Numerical calculations have been done for a stack with the coupling parameter a = 0.05, dissipation parameter /3 = 0.2 and periodic boundary conditions. We use the relatively small value of a = 0.05 in our simulations to capture the principal features of the observed effect. Analysis of capacitive coupling parameter values in HTSC was presented in Ref. [19]. Estimations for BSCCO give alpha in the interval 0.05-1. Particularly, the value of a = 0.1 was used in Ref. [20]. Coupling between junctions leads to the branch structure in I—^-characteristics of IJJs which is observed in the experiments [1, 2]. We note that the qualitative results are not very sensitive to these parameter values and boundary conditions. The details of the model and simulation procedure are presented in Refs. [17, 18].

The simulated I—^-characteristics of the stack with 10 JJs under radiation with frequency uj = 2 for amplitude A = 0.18 (1) and 0.27 (2) are presented in Fig. la. The dissipation parameter /3 = 0.2 means that the junctions are underdamped, so the I—^-characteristics show large hysteresis. We note that the return current to the zeroth voltage state at A = 0.27 is larger than at A = 0.18 reflecting the decrease of hysteresis under radiation. Filled arrows indicate the end of the outermost branch of I—^-characteristics (all junctions are in rotating states [7]) and transition to the inner branches. We see the main SS on the outermost branch at V = 20 and few SS in inner branches.