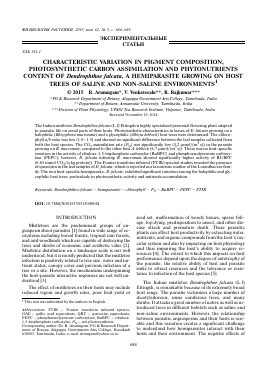 The Indian mistletoe Dendrophthoe falcata (L.f) Ettingsh is highly specialized perennial flowering plant adapted to parasitic life on aerial parts of their hosts. Photosynthetic characteristics in leaves of D. falcata growing on a halophilic (Rhizophora mucronata) and a glycophilic (Albizia lebbeck) host trees were determined. The chlorophyll a/b ratio was low (1.0—1.5) and showed no significant difference between the leaf samples collected from both the host species. The CO2 assimilation rate (PN) was significantly low (5.2 pmol/(m2 s)) in the parasite growing on R. mucronata, compared to the other host A. lebbeck (6.7 pmol/(m2 s)). There was no host-specific variation in the activity of ribulose-1,5-bisphosphate carboxylse (RuBPC) and phosphoenolpyruvate carboxylase (PEPC); however, D. falcata infecting R. mucronata showed significantly higher activity of RUBPC (6.63 mmol CO2/(s kg protein)). The Fourier transform infrared (FTIR) spectral studies revealed the presence of quercitrin in the leaf samples of D. falcata, which is reported as a taxonomic marker of the Loranthaceae family. The non host-specific hemiparasite, D. falcate, exhibited significant variation among the halophilic and gly-cophilic host trees, particularly in photosynthetic activity and nutrients accumulation.

Mistletoes are the predominant groups of an-giosperm shoot parasites [1] found in wide range of ecosystems including boreal forests, tropical rain forests, and arid woodlands which are capable of destroying the trees and shrubs of economic and aesthetic value [2]. Mistletoe distribution on a landscape scale is not well understood, but it is mostly predicted that the mistletoe infection is positively related to tree size, water and nutrient status, canopy cover and previous infection of a tree or a site. However, the mechanisms underpinning the host-parasite interactive responses are not well understood [3].

The effect of mistletoes on their hosts may include reduced vigour and growth rates, poor fruit yield or

seed set, malformation of woody tissues, sparse foliage, top dying, predisposition to insect, and other disease attack and premature death. These parasitic plants can affect host productivity by extracting water, nutrients, and organic compounds from the host's vascular system and also by impacting on host physiology and thus impairing the host's ability to acquire resources [4]. The extent to which this impacts on host performance depend upon the degree of autotrophy of the parasite, the relative ability of host and parasite sinks to attract resources and the tolerance or resistance to infection of the host species [5].

The Indian mistletoe Dendrophthoe falcata (L.f) Ettingsh, is remarkable because of its extremely broad host range. The parasite victimizes a large number of dicotyledonous, some coniferous trees, and many shrubs. It attacks a great number of native as well as introduced trees in different habitats such as saline and non-saline environments. However, the relationship between parasitic angiosperms and their hosts is variable and this variation creates a significant challenge to understand how hemiparasites interact with their hosts and their environment. The negative effects of

the obligate hemiparasitic weeds on host photosynthesis are well documented, there are, however, virtually no such data available for D. falcata reporting the effect of this parasitic plant on host photosynthesis or, indeed, the effect of host on parasite photosynthesis [6]. The physiological responses of mistletoes found growing on the halophytes especially mangroves remain largely unknown; however, the few studies available suggest that host responses vary. Therefore, the present study aimed to investigate the characteristic variation in pho-tosynthetic responses, phytochemicals and antioxida-tive properties of D. falcata growing on halophilic (Rhizophora mucronata) and glycophylic (Albizia lebbeck) host trees.

Plant material. The present study was carried out on the hemiparasite Dendrophthoe falcata (L.f) Ettingsh growing on Albizia lebbeck, a glycophylic (non-saline) host, and on Rhizophora mucronata, a halophylic (saline) host, in Pichavaram mangrove forest located at the northeast coast of Tamilnadu, India (11°24' N and 79°44' E). The climatic profile of the study area revealed a sub-humid status with the mean monthly temperature of 29.4 ± 2.3°C, mean rainfall of 370 ± 28 mm and the mean of annual relative humidity of 78% at 08:30 and 71% at 17:30.

Photosynthesis. Chlorophyll content was determined spectrophotometrically following the method of Arnon [7] and expressed as on fresh weight basis as well as per unit leaf area basis. Net photosynthesis (PN), transpiration rate (E), and stomatal conductance (gs) were determined in fully expanded third lamina, using a portable open flow gas exchange system LI-6400 ("LI-COR", USA). The photosynthetically active radiation (PAR) was 1 200 ^mol/(m2 s). The ambient CO2 concentration was set at 360 ^M. A minimum of three readings were made on separate leaves of D. falcata from both the host trees [8]. The instantaneous water use efficiency (WUE) was calculated as PN/E [9]. The carbon assimilatory enzymes phosphoenolpyru-vate carboxylase (PEPC) (EC 4.1.1.31) and ribulose-1,5-bisphosphate carboxylse (RuBPC) (EC. 4.1.1.39) were assayed by the method of Sadasivam and Gowri [10]. The enzyme activity was expressed as the amount of enzyme required to fix 1 mmol CO2/(s kg protein) under the experimental conditions.

Phenols. Total phenol contents were determined by the Folin—Ciocalteu method proposed by Lin and Tang [11]. The calculation of total phenol content was based on the calibration curve of the gallic acid standard and the data were expressed as milligram gallic acid equivalents (GAE)/100 g fresh weight.

water with the alcoholic plant extract was left at room temperature for 30 min after which the absorbance was measured at 415 nm with a double beam UV/Visible spectrophotometer ("Shimadzu", Japan). The calibration curve was plotted by preparing the quercetin solutions with concentrations from 6.25 to 100 ^g/mL in methanol. The data were expressed as milligram quercitin equivalents (QRT)/100 g fresh weight.

Tannins. Total tannin content was measured by vanillin-hydrochloride method as described by Chang et al. [13]. A volume of 1.0 mL 0.1 mg/mL extract solution was mixed with 5 mL vanillin hydrochloride reagent; the mixture was allowed to stand for 20 min. The absorbance was measured at 500 nm. The standard curve was prepared using tannic acid.

FTIR analysis. Fourier transform infrared spectra (FTIR) were studied using spectrometer ("Schimadzu") to quantify the phytochemicals in the leaf samples of D. falcata growing on both host trees. For this, 3 mg sample was dispersed in 300 mg of spectroscopic grade KBr and subsequently pressed into disks at 10 MPa for 3 min. The spectra were obtained with an average of 25 scans and a resolution of 4 cm-1 in the range of 4000-400 cm-1.

Antioxidative radical scavenging activity. The anti-oxidative activity of D. falcata was assessed on the basis of the radical-scavenging effect of the stable DPPH (1-diphenyl-2-picryl hydrazine) free radical. The concentration of DPPH was kept at 300 ^M in MeOH. 1 mg of the extract was dissolved separately in 1 mL of MeOH and different concentrations (5—200 ^g/mL) were prepared. 10 ^L of each extract solution was allowed to react with 200 ^L DPPH at 37°C for 30 min in a 96-well microliter plate. After incubation, decrease in absorption for each solution was measured at 490 nm using a microplate reader. Ascorbic acid was used as the reference [14].

Statistical analysis. The results are presented as mean value of three replicates ± SE. Data were also analyzed on the basis of ANOVA, the difference was considered significant whenp < 0.05.

The occurrence and abundance of mistletoes in a given area can be influenced by the distribution of suitable host species, the degree of host specificity, pollinators, habitat fragmentation, and parasite host chemical interactions [15, 16]. Most parasites display some host preference, where performance is poorer on non-preferred species and parasite density is disproportional to host availability. Variations in the observed effects of a parasite on its host may be due to the combined influence of the virulence of the parasite and the susceptibility of the host [17]. Broadly, these effects can be classified in terms of direct effects of resour