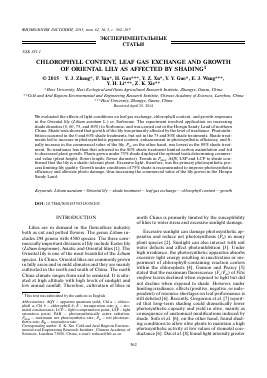 We evaluated the effects of light conditions on leaf gas exchange, chlorophyll content, and growth responses in the Oriental lily (Lilium auratum L.) cv. Sorbonne. The experiment involved application on increasing shade densities (0, 60, 75, and 80%) to Sorbonne, and was carried out in the Horqin Sandy Land of northern China. Shade tests showed that growth of the lily was primarily affected by the level of irradiance. Photoinhibition occurred in the 0 and 60% shade treatments, but not in the 75 and 80% shade treatments. Shade treatments led to increase in photosynthetic pigment content, enhancement in photosynthetic efficiency, and finally increase in the commercial value of the lily. Pn, on the other hand, was lowest in the 80% shade treatment. So irradiance less than that achieved in the 80% shade treatment limited carbon assimilation and led to decreased plant growth. Plants grown under 75% shade displayed the optimal traits determining commercial value (plant height, flower length, flower diameter). Trends in Pmax, AQY, LSP and LCP to shade confirmed that the lily is a shade-tolerant plant. Excessive light, therefore, was the primary photosynthetic process limiting lily quality. Growth under conditions of 75% shade is recommended to improve photosynthetic efficiency and alleviate photo damage, thus increasing the commercial value of the lily grown in the Horqin Sandy Land.

Lilies are in demand in the floriculture industry both as cut and potted flowers. The genus Lilium includes 294 genera with 4500 species. The three commercially important divisions of lily include Easter lily (Lilium longiorum), Asiatic and Oriental lilies [1]. The Oriental lily is one of the most beautiful of the Lilium species. In China, Oriental lilies are commonly grown in hilly areas and in mild climates and they are mainly cultivated in the north and south of China. The north China climate ranges from arid to semiarid. It is situated at high altitude with high levels of sunlight and low annual rainfall. Therefore, cultivation of lilies in

north China is primarily limited by the susceptibility of lilies to water stress and excessive sunlight damage.

Excessive sunlight can damage photosynthetic apparatus and reduce net photosynthesis (Pn) in many plant species [2]. Sunlight can also interact with soil water deficits and affect photoinhibition [3]. Under high irradiance, the photosynthetic apparatus absorbs excessive light energy resulting in inactivation or impairment of chlorophyll-containing reaction centers within the chloroplasts [4]. Gamon and Pearcy [5] stated that the maximum fluorescence (Fv/Fm) of Vitis vinifera leaves declined when exposed to light but did not decline when exposed to shade. However, under limiting irradiance, effects (positive, negative, or independent) of resource shortages on leaf performance is still debated [6]. Recently, Gregoriou et al. [7] reported that long-term shading could dramatically lower photosynthetic capacity and yield in olive, mainly as consequence of anatomical modifications induced by shade. Sofo et al. [6], on the other hand, found shading conditions to allow olive plants to maintain a high photosynthetic activity at low values of stomatal conductance [6]. Dai et al. [8] found light intensity greater

According to Wang [9], the lily is a shade-requiring plant. The lily is presumably subjected to photoinhibition when exposed to elevated light conditions. In spite of farmers being generally unacquainted with scientific literature on the effect of photoinhibition and photodamage, they typically cultivate lilies under shading nets during spring and summer months, effectively reducing the maximum light level by 60-80%. Sorrentino and Cerio [10] also reported that shading lily crops can slightly raise their commercial value compared to plants grown under full sunlight conditions. Although Sorrentino and Cerio [10] reported on lily plants with a preference to shade conditions, no studies have yet determined the optimum light intensity for lily growth in north China, where high light irradiation is common.

Very little is known of how light conditions in north China affect lily photosynthesis and growth adaptations. A major objective of this study, therefore, was to show the effects of different light conditions on lilies. This objective was carried on determining the optimum shade intensity for Oriental lilies based on measurements of leaf gas exchange, chlorophyll content and their correlation with overall growth. We present practical recommendations based on the available data, and identify gaps in knowledge that should be filled by future research. Our results should help farmers to maximize lily growth and production in the Horqin Sandy Land.

The study area was in Naiman County (lat 42° 55' N, long 120°44' E, 345 m AMSL) in the eastern region of Inner Mongolia. Naiman County is located in the hinterland of the Horqin District of northern China [11]. The climate is a temperate, semi-arid continental mon-soonal environment with an annual mean rainfall of 360 mm in which 75% occurs between June and September. The annual mean latent evaporation is 1935 mm [12].

The experiment was carried out at Gaolan Station located within the Cold and Arid Regions Environmental and Engineering Research Institute, Chinese Academy of Sciences. The effects of shading on leaf gas exchange, chlorophyll content and growth of the Oriental lily Sorbonne (Lilium auratum L.) were determined. Uniform sized Sorbonne lily bulbs (12 to 13 cm in diameter) were planted in plastic pots of 26 cm diameter and 25 cm height.

Sorbonne lily bulbs were planted in pots containing peat from near the Naiman desertification research station on May 9, 2012. Bulbs were fertilized over a 10 day period with Hoagland nutrient solution beginning 10 days after plants budded. Plants were grown under four shade treatments (0, 60, 75, and 80% of natural incident irradiance) provided by 2 m high wooden frames. The plants under shading were left under shade nets until harvest, while the control plants were left to grow under natural sunlight conditions (0%). Diurnal fluctuations of photosynthetically active radiation (PAR) and air temperature for sun light on August 9, 2012 in Naiman were as follows (fig 1).

Quality parameters. Five plants were measured for the diameter of the flower head (cm), plant height (cm) and length of the flower (cm) for every shade or control treatment at the time of opening of the first lily flower bud.

Photosynthetic pigment determination. After determination of photosynthetic activity, chlorophyll content (Chl) and quality parameters, all leaves were harvested. Fresh leaf masses of 0.1 g were taken to determine Chl content. Leaves were then ground in 80% acetone to extract both Chl and Car. Pigment quantity was ascertained according to Lichtenthaler [13].

Different letters among rows within a column denoted significantly differences at P < 0.05 according to Duncan's multiple range tests.

curves were determined us