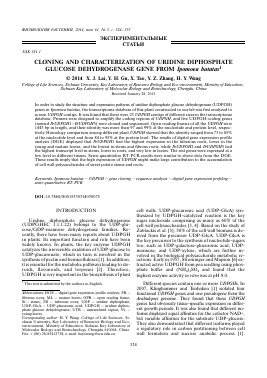 In order to study the structure and expression patterns of uridine diphosphate glucose dehydrogenase (UDPGH) genes in Ipomoea batatas, the transcriptome database of this plant constructed in our lab was first analyzed to screen UDPGH contigs. It was found that there were 23 UDPGH contigs of different sizes in the transcriptome database. Primers were designed to amplify the coding regions of UDPGH, and five UDPGH-coding genes (named IbUDPGH1—IbUDPGH5) were cloned and sequenced. Open reading frames of all the UDPGH were 1443 bp in length, and their identity was more than 97 and 99% at the nucleotide and protein level, respectively. Homology comparison among different plant UDPGH showed that the identity ranged from 73 to 85% at the nucleotide level and from 84 to 95% at the protein level. The results of digital gene expression profile analysis (DGE) displayed that IbUDPGHl had the highest expression in the tuberous roots, lower in the young and mature leaves, and the lowest in stems and fibrous roots, while IbUDPGH2 and IbUDPGH5 had the highest transcript level in stems, lower in roots, and very low in leaves. The rest genes were expressed at a low level in different tissues. Semi-quantitative RT-PCR results were similar to above data from the DGE. These results imply that the high expression of UDPGH might make large contribution to the accumulation of cell wall polysaccharides of sweet potato stems and roots.

Uridine diphosphate glucose dehydrogenase (UDPGHEC 1.1.1.22) belongs to the UDP-glu-cose/GDP-mannose dehydrogenase families. Recently, there have been many reports about UDPGH in plants. Its important function and role have been widely known. In plants, the key enzyme UDPGH catalyzes the irreversible oxidation of UDP-glucose to UDP-glucuronate, which in turn is involved in the synthesis of pectin and hemicelluloses [1]. In addition, it is essential for the metabolic pathways leading to steroids, flavonoids, and terpenes [2]. Therefore, UDPGH is very important in the biosynthesis of plant

1 This text is submitted by the authors in English.

cell walls. UDP-glucuronic acid (UDP-GlcA) synthesized by UDPGH-catalyzed reaction is the key sugar nucleoside comprising as many as 60% of the cell wall polysaccharides [3, 4]. Based on the study of Zablackis et al. [5], 50% of the cell wall biomass is derived from the precursor UDP-GlcA. UDP-GlcA is the key precursor to the synthesis of nucleotide-sugars too, such as UDP-galactose-glucuronic acid, UDP-mannose, and UDP-xylose, which are further involved in the biological polysaccharide metabolic reactions. Early in 1957, Strominger and Mapson [6] extracted active UDPGH from pea seedling using phosphate buffer and (NH4)2SO4 and found that the highest enzyme activity in vitro was at pH 9.0.

Different species contain one or more UDPGHs. In 2007, Klinghammer and Tenhaken [1] isolated four functional UDPGH genes and one pseudogene from the Arabidopsis genome. They found that these UDPGH genes had obviously tissue-specific expression in different growth periods. It was also found that different iso-forms displayed equal affinities for the cofactor NAD+, but variable affinities for the substrate UDP-glucose. They also demonstrated that different isoforms played a regulatory role in carbon partitioning between cell wall formation and sucrose anabolic process [1].

Maize contains at least two putative UDPGHs, whose product is the precursor of UDP-D-xylose and UDP-L-arabinose, which plays an important role in the cell wall pentose biosynthesis [7]. Liu et al. [8] cloned one UDPGH from Boehmeria nivea and showed that UDPGH was expressed in the leaf, stem, root, and phloem of this plant, among which stems had the highest expression abundance, followed by the bark, leaves, and roots. The study of an extreme salt-tolerant Dunaliella salina demonstrated that the UDPGH expression could be rapidly induced by salt stress to participate in the synthesis of polysaccharides, thus to enhance the salt resistance of D. salina [9]. Samac et al. [10] successfully transformed soybean UDPGH into alfalfa (Medicago sativa), and in the initial greenhouse experiments, the UDPGH enzyme activity in trans-genic alfalfa was sevenfold of that in nontransformed plants; xylose level increased by 15% in most transgen-ic lines compared to the nontransformed control.

Sweet potato (Ipomoea batatas (L.) Lam.) is an annual sprawling herbaceous dicotyledonous plant and belongs to the family of Convolvulaceae. Total production of sweet potato is the 6th in the world and the 5th in China. It is not only an important food and feed crop, but also an important root crop used as a feedstock of industrial and new energy production. Tuberous root of sweet potato is rich in starch, cellulose, sugars, and other carbohydrates, including hemicellu-lose, pectin, and other cell wall polysaccharides, which are mainly synthesized from the common precursor UDP-GlcA and are important components of the plant cell walls [11]. In addition, UDP-GlcA is an important precursor for polysaccharide synthesis, while the polysaccharide could boycott abiotic stresses and is related to plant salt tolerance. Overall researches of the basic structure and function of sweet potato UDPGH demonstrated that it is important for the growth and development of the sweet potato and could be used in other applications, such as mass producing the xanthan [12].

Since sweet potato is a hexaploid plant (2n = 6x = 90), it is very difficult to determine its genome sequences. However, we have established a transcriptome database from sweet potato leaves, stems, and roots [13] and obtained digital gene expression (DGE) profile data. We screened the UDPGH contigs from the sweet potato transcriptome database and designed primers for cloning UDPGH-coding sequences by RT-PCR. After sequencing the cloned fragments, the homology analyses were carried out. The expression level of UDPGH in different tissues of sweet potato was analyzed by using DGE profile and semi-quantitative RT-PCR.

roots (TR) were collected at 90 days after planting [13]. The tissue samples were snap-frozen immediately in liquid nitrogen and stored at —80°C until further processing. Escherichia coli strain JM109 (recA1,

Isolation of total RNA and RT-PCR. Total RNA of mature leaves (Xushu 18) was extracted using the E.Z.N.A. Plant DNA/RNA kit ("Omega", United States) and treated with DNase I ("Fermentas", United State) according to the manufacturer's instructions. The cDNA was synthesized from 300 ng of total RNA with the M-MLV reverse transcriptase ("Invit-rogen", United States) and the primer oligo (dT)20. The following reaction conditions were used: pre-warming at 37°C for 2 min, then adding 1 ^L (200 U) of M-MLV reverse transcriptase, 37°C for 50 min, and heating at 70°C for 5 min to terminate the reaction.

The resulting cDNA was used to amplify UDPGH in polymerase chain reaction (PCR). The sequences of primers used are shown in the table. They were designed based on the sweet potato transcriptome database constructed in our laboratory (http://cfgbi. scu.edu.cn/SweetPotato/index.php) [13]. The PCR reaction was performed using DNA polymerase KOD FX ("TOYOBO", Japan) under the condition of pre-denaturation at 94°C for 2 min, and 30 cycles of dena-turation at 98°C for 10 s, annealing at 57°C for 30 s, extension at 68°C for 2 min, and final extension at 68°C for 10 min. The PCR product was analyzed and recovered from 1% (w/v) agarose gel by AxyPrep DNA gel extraction kit ("Axygen Biosciences", United States). 20 ^L of purified PCR products (20 ng/^L) were submitted to Beijing Genomics Institute (BGI)-Shenzhen, Shenzhen, China, for sequencing.

Isolation of genomic DNA. Genomic DNA was extracted using the CTAB method [14] adopted as follows: leaf tissues were frozen in liquid nitrogen, ground in a mortar, resuspended in pre-warmed (90°C) 2x CTAB extraction buffer, and incubated in a water bath at 65°C for 90 min. To this mixture, an equal volume of a chloroform/isoamyl alcohol (24 : 1) mixture was added and mixed thoroughly. The supernatant was transferred to a clean centrifuge tube combined with the 2/3 v