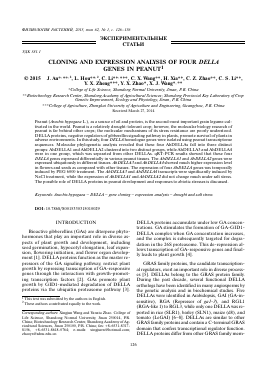 Peanut (Arachis hypogaea L.), as a source of oil and protein, is the second-most important grain legume cultivated in the world. Peanut is a relatively drought-tolerant crop; however, the molecular biology research of peanut is far behind other crops; the molecular mechanisms of its stress resistance are poorly understood. DELLA proteins, negative regulators of gibberellin signaling pathway in plants, promote survival of plants in adverse environments. In this study, four DELLA homologue genes were isolated using peanut transcriptome sequences. Molecular phylogenetic analysis revealed that these four AhDELLAs fall into three distinct groups: AhDELLAl and AhDELLA2 clustered into two distinct groups, while AhDELLA3 and AhDELLA4 were in one group, which was separated from other DELLAs. qRT-PCR results showed that these four DELLA genes expressed differentially in various peanut tissues. The AhDELLAl and AhDELLA2 genes were expressed ubiquitously in different tissues. AhDELLA3 and AhDELLA4 showed much higher expression level in flowers and seeds as compared with other tissues. The expression of four AhDELLA genes was temporally induced by PEG 6000 treatment. The AhDELLA3 and AhDELLA4 transcripts were significantly induced by NaCl treatment, while the expression of AhDELLAl and AhDELLA2 did not change much under salt stress. The possible role of DELLA proteins in peanut development and responses to abiotic stresses is discussed.

DELLA proteins accumulate under low GA concentrations. GA stimulates the formation of GA-GID1-DELLA complex when GA concentration increases, and the complex is subsequently targeted for degradation in the 26S proteasome. This de-repression allows transcription of GA-responsive genes and finally leads to plant growth [4].

GRAS family proteins, the candidate transcription-al regulators, exert an important role in diverse processes [5]. DELLAs belong to the GRAS protein family. During the past decade, several functional DELLA orthologs have been identified in many angiosperms by the genetic analysis and in biochemical studies. Five DELLAs were identified in Arabidopsis, GAI (GA-in-sensitive), RGA (Repressor of gal-3), and RGL1 (RGA-like 1) to RGL3, while only one DELLA was reported in rice (SLR1), barley (SLN1), maize (d8), and tomato (LeGAI) [6-8]. DELLAs are similar to other GRAS family proteins and contain a C-terminal GRAS domain that confers transcriptional regulator function. DELLA proteins differ from other GRAS family mem-

bers by the N-terminal DELLA domain [9], which contains highly conserved DELLA- and VHYNP-motifs at the N terminal region that are necessary for GID1 binding and GA-induced degradation [10, 11]. The mutation in the DELLA region prevented the GA-induced degradation of DELLA proteins and became a constitutively repressor of GA signaling leading to a GA-insensitive dwarf phenotype [12]. The deletion of the GRAS domain led to the constitutive GA response phenotype [13].

Monocots generally contain only one DELLA gene. In contrast, in most dicotyledonous plants, DELLA proteins are encoded by multigene families, except that in tomato [7]. In Arabidopsis, five DELLA proteins display overlapping but also distinct functions in regulating plant growth and development. For example, GAI and RGA are the major repressors during vegetative growth and floral induction [14]. RGA together with RGL1 and RGL2 regulate male fertility, which influence flower and seed production [15, 16]. RGL2 has been proposed to be the main regulator of seed germination [16, 17].

Environmental stresses, such as drought, high salinity, and extreme temperatures, adversely affect plant growth and development, as well as crop productivity and quality. Recently, the results of a number of studies suggested that the growth restraint conferred by DELLA proteins is beneficial and promotes plant survival in the adverse environments. Environmental stresses stabilize DELLAs and thereby enhance plant stress tolerance by abolishing the cell proliferation, or at least in part through reducing the accumulation of ROS [18-20]. Consequently, quadruple DELLA mutants are less tolerant to cold and salt stresses and show less growth inhibition under stress condition [18, 19].

Peanut, as a relatively drought tolerant crop, is widely grown in the world. However, the molecular biological, genomics, and genetic modification studies of peanut are limited compared with other crops like rice, cotton, and soybean. In this study, four AhDELLA homolog genes from peanut were cloned, and their sequence similarity with DELLAs from other plant species were compared. The expression patterns of AhDELLA genes were investigated in different organs and under drought and salt stresses.

Plant material. Peanut (Arachis hypogaea L.) cv. Luhua-14 grown in farmland was used in this experiment. Plant tissues including roots, stems, leaves, flowers, gynophores, and immature seeds were used for gene expression analysis. Gynophores of 1 cm in length (from the tip of the gynophore) before being buried into soil were sampled. The roots from 40-day-old seed-

Peanut seeds were sown in the plastic basins, which were filled with perlite, and cultured in a growth chamber with a 16-h photoperiod, 26/24°C (light/dark) temperature, and a relative humidity of 70%. Twelve-day-old peanut seedlings were subjected to stress treatments. Plants were treated with 250 mM NaCl solution or 20% PEG 6000, respectively, according to previously described methods [21]. Leaf samples were collected at 0, 3, 6, 12, 24, or 48 h after treatment. Five plants were sampled at each time point, and three biological replicates were prepared separately. Leaf samples were immediately frozen in liquid nitrogen, and then stored in the -80°C freezer for further RNA extraction.

Total RNA extraction and cDNA synthesis. Total RNA was isolated according to the previously described method [22]. Genomic DNA was removed by DNase I (2270A, "TaKaRa", China) digestion. The quality and quantity of the purified RNA was determined by Agilent 2100. Total RNA was used for first-strand cDNA synthesis, which was carried out following the instruction of Primer-Script™ 1st Strand cDNA Synthesis Kit (D6110A; "TaKaRa") with oligo(dT) primer.

In order to amplify full-length AhDELLA cDNAs, RACE experiment was performed to obtain the 5'- or 3'-regions using 5' RACE and 3' RACE kit ("TaKaRa"). Gene-specific primer pairs used in RACE experiments were designed based on the corresponding known EST sequences. For each gene, two fragments containing overlapping sequences were obtained. Fi-

Gene-specific primers used in this study