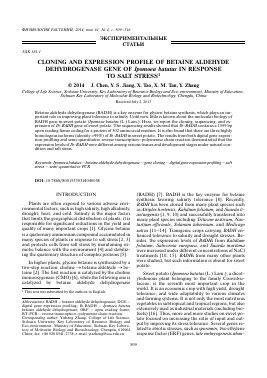 Betaine aldehyde dehydrogenase (BADH) is a key enzyme for glycine betaine synthesis, which plays an important role in improving plant tolerance to salinity. Until now, little is known about the molecular biology of BADH gene in sweet potato (Ipomoea batatas (L.) Lam.). Here, we report the cloning, sequencing, and expression of Ib-BADH gene of sweet potato. The sequencing results showed that Ib-BADH contains a 1509 bp open reading frame coding for a protein of 502 amino acid residues. It is also found that there are three highly homologous isoforms (identity >99%) of Ib-BADH in sweet potato. The results from both digital gene expression profiling and semi-quantitative reverse transcription—polymerase chain reaction demonstrated that the expression levels of Ib-BADH were different among various tissues and development stages under natural condition and salt stress.

Plants are often exposed to various adverse environmental factors, such as high salinity, high alkalinity, drought, heat, and cold. Salinity is the major factor that limits the geographical distribution of plants; it is responsible for significant reductions in the yield and quality of many important crops [1]. Glycine betaine is a quaternary ammonium compound accumulated in many species of plants in response to salt stress [2, 3] and protects cells from salt stress by maintaining osmotic balance with the environment [4] and stabilizing the quaternary structure of complex proteins [5].

(BADH) [7]. BADH is the key enzyme for betaine synthesis favoring salinity tolerance [8]. Recently, BADH has been cloned from many plant species such as Atriplex hortensis, Kalidium foliatum, and Suaeda li-aotungensis [1, 9, 10] and successfully transferred into many plant species including Triticum aestivum, Nasturtium officinale, Solanum tuberosum, and Medicago sativa [11—14]. Transgenic crops carrying BADH enhanced tolerance to salinity and drought stresses. Besides, the expression levels of BADHs from Kalidium foliatum, Salicornia europaea, and Suaeda maritima were increased under different concentrations of NaCl treatments [10, 15]. BADHs from many other plants were studied, but such information is absent for sweet potato.

Sweet potato (Ipomoea batatas (L.) Lam.), a dicotyledonous plant belonging to the family Convolvu-laceae, is the seventh most important crop in the world. It is an economic crop with high yield, drought tolerance, and wide adaptability to various climates and farming systems. It is not only the most nutritious vegetables in subtropical and tropical regions, but also extensively used as industrial materials (including biofuels) [16]. Thus, more and more studies on sweet potato focused on increasing the ratio of input and output by improving its stress tolerance. Several genes related to abiotic stresses, such as sporamin, two ethylene response factor (ERF) genes, late embryogenesis abun-

dant 14, and other were isolated from sweet potato, and their expression in response to abiotic stresses was studied [17-19].

In this study, in order to better understand the mechanism of sweet potato stress tolerance, we cloned the full length Ib-BADH and studied its expression patterns in different tissues and at different developmental stages by digital gene expression profiling (DGE) and semi-quantitative RT-PCR under native conditions and different NaCl concentrations.

Plant materials. Sweet potato (Ipomoea batatas (L.) Lam., cv. Xushu 18) was used in this study. Plants were grown in the greenhouse at 32/20°C (day/night) under an irradiance of 800 |mol photons/(m2 s) with a 10-h photoperiod and the relative humidity of 80—90%. Plants were watered timely. For the salt treatment, two-month-old plants were irrigated with different concentrations (50, 100, and 200 mM) of NaCl once every two days for 20 days with the degree for soaking the soil. Samples from young leaves, mature leaves, stems, and expanding tuberous roots were collected after 0, 3, 10, and 20 days and then frozen immediately in liquid nitrogen for further use.

Genomic DNA was extracted from 1 g ofXushu 18 tissues using CTAB method with simple modifications. The organ was ground with a mortar and pestle in liquid nitrogen; the powder was resuspended in pre-warmed (65 °C) CTAB extraction buffer and incubated at 65°C for 30 min. Then chloroform/isoamylalco-hol (24 : 1) solution was added. The mixture was centrifuged with 12000 g for 5 min. Isopropanol (2/3 of the recovered volume) was added to the supernatant and kept for 10 min. The mixture was centrifuged with 12000 g for 5 min. The DNA precipitate was washed twice with precooled alcohol and resuspended in RNase—H2O (20 |g RNase/mL) at 37°C for 30 min. The DNA was stored at —20°C for further use.

Construction of the recombinant plasmid. Firststrand cDNA was used to amplify Ib-BADH by PCR with the forward primer Ib-BADHF (5'-CGAGAAT-TCATGGCGGCTACGAATATCCG-3') and the reverse primer Ib-BADHR (5' -CGACTCGAGTTACT-TCGAAGGAGGCTTGTACC-3'). Ib-BADHF/R primers were designed based on the homologous sequences of BADH and a local transcriptomic database of sweet potato [20]. The PCR reaction was performed

using DNA polymerase KOD-Plus-Neo ("TOYOBO", Japan). The procedure was: one preliminary denatur-ation at 94° C for 2 min; 32 cycles each involving dena-turation at 98°C for 10 s, annealling at 56°C for 30 s, extension at 68°C for 1 min, and a final extension at 68°C for 10 min. The PCR product was digested by two restriction enzymes EcoRI/XhoI and inserted into the pET-32a (+) vector to generate a recombinant plasmid. The recombinant plasmid was transformed into Escherichia coli JM109. Genomic DNA was used to amplify Ib-BADH by PCR with Ib-BADHF/R, and the amplified DNA was then cloned into pMD19 vector and sequenced.

Digital gene expression analysis. The raw 21-bp DGE tags from young leaves, mature leaves, stems, fibrous roots, initial tuberous roots, expanding tuberous roots, and harvested tuberous roots were generated according to the Illumina pipeline [20]. The clean tags were mapped to Ib-BADH complete CDS using Bowtie 2.0 software [21, 22]. All clean tags corresponding to Ib-BADH gave a raw expression level of different tissues, and then we used an empirical approach described by edgeR package to normalize the expression levels by estimating the bias introduced by RNA composition [23] and different sequencing library size. After the normalizing analysis, a more accurate and scientific measurement of gene expression model in different tissues could be obtained.

Semi-quantitative RT-PCR. Linearity of Ib-BADH and P-actin in different tissues between the amount of input RNA and the final PCR products was verified. The PCR cycle numbers were 28 for Ib-BADH and 25 for the P-actin gene of sweet potato, respectively. For semiquantitative RT-PCR, primers for Ib-BADH and P-actin were sq-BADHF/R (5'-GAAGCCATTGAACTAGC-CAATG-3'/5'-TTACTTCGAAGGAGGCTTGTAC -3') and p-actinF/R (5'-TCCAGAAGAGCACCCGG-TAC-3'/5'-GTCTGTCAGGTCACGTCCAG-3'). The expression level of P-actin was used as an internal control. Bands were scanned and densitometric analysis was performed using the Bio-Rad Quantity One software (v. 4.6.2). All measurements were repeated three times.

Cloning and sequence analysis of Ib-BADH cDNAs and genes

On the basis of the results from transcriptomic database established in our laboratory, the Ib-BADH cDNA was first cloned and then sequenced. The sequencing results showed that Ib-BADH contained a