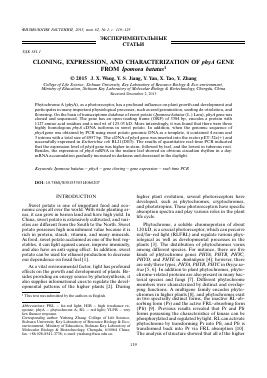 Phytochrome A (phyA), as a photoreceptor, has a profound influence on plant growth and development and participates in many important physiological processes, such as seed germination, seeding de-etiolation, and flowering. On the basis of transcriptome database of sweet potato (Ipomoea batatas (L.) Lam), phyA gene was cloned and sequenced. The gene has an open reading frame (ORF) of 3384 bp, encodes a protein with 1127 amino acid residues and a mol wt of 125.03 kD. More interestingly, it was found that there were three highly homologous phyA cDNA isoforms in sweet potato. In addition, when the genomic sequence of phyA gene was obtained by PCR using sweet potato genomic DNA as a template, it contained 4 exons and 3 introns with a total size of 4957 bp. The cDNA of phyA gene was inserted into the vector pET-32a(+) and successfully expressed in Escherichia coli BL21(DE3). The results of quantitative real-time PCR indicated that the expression level of phyA gene was higher in stem, followed by leaf, and the lowest in tuberous root. Besides, the expression of phyA mRNA in the mature leaf showed an obvious circadian rhythm in a day: mRNA accumulation gradually increased in darkness and decreased in the daylight.

Sweet potato is one of important food and economic crops all over the world. With wide planting areas, it can grow in barren land and have high yield. In China, sweet potato is extensively cultivated, and varieties are different from the South to the North. Sweet potato possesses high nourishment value because it is rich in protein, starch, vitamin, and many minerals. As food, sweet potato acclaimed as one of the best vegetables; it can fight against cancer, improve immunity, and also have an anti-aging effect. In addition, sweet potato can be used for ethanol production to decrease our dependence on fossil fuel [1].

As a vital environmental factor, light has profound effects on the growth and development of plants. Besides providing an energy source by photosynthesis, it also supplies informational cues to regulate the developmental patterns of the higher plants [2]. During

Phytochrome, a soluble chromoprotein of about 120 kD, is a crucial photoreceptor, which can perceive red/far-red light (RLFRL) and regulate various physiological as well as developmental processes in the plants [3]. The distribution of phytochromes varies among different species. For instance, there are five kinds of phytochrome genes PHYA,, PHYB, PHYC, PHYD, and PHYE in Arabidopsis [4]; however, there are only three types, PHYA, PHYB, PHYC in Oryza sativa [5, 6]. In addition to plant phytochromes, phyto-chrome-related proteins are also present in many bacterial species and fungi [7]. Different phytochrome members were characterized by distinct and overlapping functions. A multigene family encodes phytochromes in higher plants [8], and phytochromes exist in two spectrally distinct forms, the inactive RL-ab-sorbing form (Pr) and the active FRL-absorbing form (Pfr) [9]. Previous results revealed that Pr and Pfr forms possessing the characteristics of kinase can be phosphorylated and regulated by light. RL can activate phytochrome by transforming Pr into Pfr, and Pfr is transformed back into Pr via FRL absorption [10]. The analysis of structure showed that all of the higher

plant phytochromes had the similar primary structure. Phytochrome proteins share a common N-terminal photosensory core and C-terminal domains regulating transmission of photosensory signals to signal transduction pathways [11]. The signal transduction by phytochrome is quite complicated, involving lightmediated nuclear translocation and regulation of transcription factor function [12]. Under light conditions, phytochrome is transferred from the cytosol to the nucleus and interacts with particular transcription factors for regulating gene expression [13].

PhyA is responsible for the very low fluence response (VLFR) under inductive light conditions and for the high irradiance response (HIR) under continuous FRL [14]. PhyA has an important influence on growth and development through the entire life cycle of higher plants. PhyA is involved in seeds germination, seedlings de-etiolation, shade (irradiance) perception, resetting of circadian rhythms, and flowering. Therefore, research on phyA is very significant for growth and yield in the plants.

In this study, phyA gene was cloned from sweet potato. The analysis of sequence revealed that phyA existed in three highly homologous cDNAs isoforms. The protein expression was determined in E. coli BL21(DE3) by using pET32(a+) vector. Temporal and spatial expression pattern was followed with quantitative real-time PCR. These results provide useful information for improving production and breeding in the sweet potato and other crops.

Materials and chemicals. Sweet potato (Ipomoea batatas (L.) Lam) cv. Xushu18 was planted under natural conditions in the experimental field of Sichuan University. The mature leaves were collected at two-hour intervals from 00:00 to 22:00. Different tissues, including leaves, tuberous roots, and stems were sampled at 90 days of growing. These samples were washed and stored in —80°C for use. pET32a(+) was adopted to construct expression plasmid. Gene cloning and expression were performed in E. coli JM109 and BL21 strains, respectively. RNA TRIzol reagents and reverse transcriptase M-MLV kits were obtained from "Invit-rogen" (United States), and KOD-Plus-Neo for PCR from "TOYOBO" (Japan). Restriction enzymes, T4 DNA polymerase, and dNTP were purchased from "Fermentas" (United States). Primer LA Taq and SYBR Primer EX Taq II (2x) were obtained from "Takara" (Japan).

Extraction of RNA and cloning of phyA cDNAs.

Total RNA was isolated using TRIzol reagent ("Invit-rogen") according to the operation manual. The firststrand cDNA was synthesized from the total RNA by M-MLV reverse transcriptase ("Invitrogen"), using oligo(dT) as a template. cDNA product was used for amplifying phyA gene with the forward primer 5'-CGATCTAGAATGTCAACTTCCAGACCTAGTC-3'

and the reverse primer 5'-CGAGAGCTCTCACGAA-GAAGGTTTAGAAGC-3'. The primers were designed on the basis of sweet potato Xushu18 transcrip-tome database (our laboratory database). PCR was performed by KOD-Plus-Neo ("TOYOBO") DNA polymerase including 5 steps: pre-denaturation at 94°C for 2 min, 35 cycles of denaturation at 98°C for 10 s, annealing at 5°C for 30 s, extension at 68°C for 3 min 30 s, and final extension at 68°C for 10 min. PCR product was detected and purified in 1% agarose gel.

Genomic DNA was derived from mature leaves of sweet potato Xushu18, using the cetyl-trimethyl-am-monium bromide protocol. Primers for PCR were identical to those, which were used for cDNA synthesis. The phyA gene was amplified by premix LA Taq DNA polymerase ("Takara"), using genomic DNA as a template following procedures below: pre-denatur-ation at 98°C for 3 min, 30 cycles of denaturation at 98°C for 10 s, annealing at 51°C for 30 s, extension at 72°C for 5 min, and final extension at 72°C for 10 min. PCR product was verified and recovered in 1% agarose gel and then ligated to pMD-18T vector for sequencing.

Recombinant expression of phyA. The cDNAs of phyA and pET32(a+) were digested by BamHI/SacI, linked by T4 DNA polymerase and transformed E. coli BL21 for recombinant expression. The recombinants were screened on the LB plate including 50 ^g/mL ampicillin. A single colony was picked and inoculated in 3 mL of LB liquid medium containing 50 ^g/mL of ampicillin and grown overnight at 37°C. The 0.1 mL of o