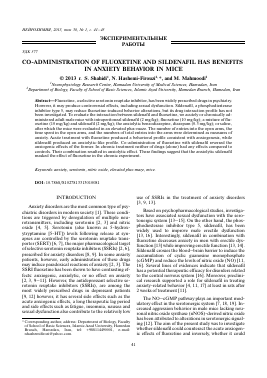 CO-ADMINISTRATION OF FLUOXETINE AND SILDENAFIL HAS BENEFITS

Abstract—Fluoxetine, a selective serotonin reuptake inhibitor, has been widely prescribed drugs in psychiatry. However, it may produce controversial effects, including sexual dysfunction. Sildenafil, a phosphodiesterase inhibitor type 5, may reduce fluoxetine-induced behavior alterations, but its drug interaction profile has not been investigated. To evaluate the interaction between sildenafil and fluoxetine, we acutely or chronically administered adult male mice with intraperitoneal sildenafil (2 mg/kg); fluoxetine (10 mg/kg); a mixture of fluoxetine (10 mg/kg) and sildenafil (2 mg/kg); the anxiolytic benzodiazepine, diazepam (0.3 mg/kg); or saline, after which the mice were evaluated in an elevated plus-maze. The number of entries into the open arms, the time spent in the open arms, and the numbers of total entries into the arms were determined as measures of anxiety. Acute treatment with fluoxetine produced a behavioral profile consistent with anxiogenesis, while sildenafil produced an anxiolytic-like profile. Co-administration of fluoxetine with sildenafil reversed the anxiogenic effects of the former. In chronic treatment neither of drugs (alone) had any effects compared to controls. Their combination resulted in anxiolytic effect. These findings suggest that the anxiolytic sildenafil masked the effect of fluoxetine in the chronic experiment.

Anxiety disorders are the most common type of psychiatric disorders in modern society [1]. These conditions are triggered by deregulation of multiple neurotransmitters, including serotonin [2, 3] and nitric oxide [4, 5]. Serotonin (also known as 5-hydrox-ytryptamine [5-HT]) levels following release at synapses are controlled by the serotonin reuptake transporter (SERT) [6, 7], the major pharmacological target of selective serotonin reuptake inhibitors (SSRIs) [2, 6], prescribed for anxiety disorders [8, 9]. In some anxiety patients, however, early administration of these drugs may induce paradoxical reactions of anxiety [2, 3]. The SSRI fluoxetine has been shown to have contrasting effects: anxiogenic, anxiolytic, or no effect on anxiety [2, 3, 9—11]. However, the antidepressant selective serotonin reuptake inhibitors (SSRIs), are among the most widely prescribed drugs in depressant patients [9, 12] however, it has several side effects such as the acute anxiogenic effects, a long therapeutic lag period and side effects such as fatigue, insomnia, nausea and sexual dysfunction also contribute to the relatively low

Based on psychopharmacological studies, investigators have associated sexual dysfunction with the serotonergic system [13—15]. On the other hand, the phosphodiesterase inhibitor type 5, sildenafil, has been widely used to improve male erectile dysfunction [13, 16]. Interestingly, sildenafil in combination with fluoxetine decreases anxiety in men with erectile dysfunction [13] while improving erectile function [13, 14]. Sildenafil crosses the blood—brain barrier to induce the accumulation of cyclic guanosine monophosphate (cGMP) and reduce the levels of nitric oxide (NO) [11, 16]. Several lines of evidences indicate that sildenafil has a potential therapeutic efficacy for disorders related to the central nervous system [16]. Moreover, preclinical research supported a role for sildenafil in treating anxiety-related behavior [4, 11, 17] at least in rats after 2 weeks of treatment [11].

The NO—cGMP pathway plays an important modulatory effect in the serotonergic system [7, 18, 19]. Increased aggression behavior in male mice lacking neuronal nitric oxide synthase (nNOS)-derived nitric oxide has been attributed to alterations in serotonergic signaling [12]. The aim of the present study was to investigate whether sildenafil could counteract the acute anxiogen-ic effects of fluoxetine and inversely, whether it could

NMRI male adults' mice weighing 20—30 g were obtained from the Pasteur Institute (Tehran, Iran). They were maintained at 20 ± 2°C in a 12-h light/12-h dark cycle. The tap water and chow pellets were available ad libitum. Mice were allowed to acclimate to laboratory conditions for 1 week before the experiments were performed. Each animal was used only once. All tests were conducted between 900 and 1500 hours. All experiments were performed in accordance to the Guide for the Care and Use of Laboratory Animals (National Institutes of Health Publication No. 85—23, revised 1985).

Fluoxetine (10 mg/kg; Tocris, Biosciences), sildenafil (2 mg/kg; Vorin, India), and diazepam (0.3 mg/kg; Caspian, Tamin, Iran) were used in the study. Physiological saline (0.9% sodium chloride) was used as the vehicle. All drugs were prepared freshly and administered intraperitoneally (i.p.) in a volume of 0.1 mL per 10 g of body weight of the mice. The doses of drugs were chosen according to previous experiments [2, 7, 8, 10, 14].

The black wooden apparatus had equal arms. Its two arms were closed by walls (30 x 15 x 5 cm) and arranged in line with two opposite open arms (30 x 5 cm). The maze was elevated 50 cm above the floor. Mice were placed in the center of the maze facing the open arms. The mice were allowed to explore the maze, and their behaviors monitored by digital camera above the maze for 10 min. After each test, the apparatus was cleaned with 10% ethanol to eliminate any remaining odors. The time spent in the open arms, the number of entries into the open arms, and the total numbers of entries into the arms were calculated [7, 17, 22].

Mice were randomly assigned to 1 of 5 groups of 10 mice each. Saline, sildenafil, fluoxetine, diazepam, or a combination of fluoxetine and sildenafil were administered to different groups of mice 15 min prior to subjecting them to the elevated plus-maze challenge.

Mice were randomly assigned to 1 of 5 groups of 10 mice each. Mice were given saline, sildenafil, fluox-etine, diazepam, or a combination of fluoxetine and sildenafil once a day for 15 consecutive days. All mice were weighted daily to calculate the volume of injection. One hour after the 15th injection, the mice were challenged to complete the elevated plus-maze. The 15th day of chronic treatment was chosen on the basis of previous reports on the effect of these drugs [8, 10, 11].

All results are presented as the mean ± standard error of the mean (SEM). Data were analyzed by one-way analysis of variance (ANOVA). Post-hoc comparisons were performed using the Tukey—Kramer test to determine the effects of various treatments. A p value of less than 0.05 was considered significant.