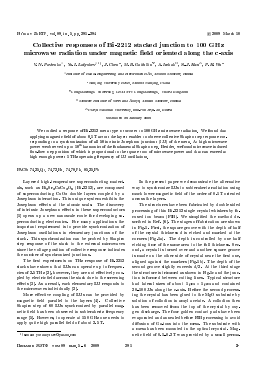 We studied a response of Bi-2212 mesa type structures to 100 GHz microwave radiation. We found that applying magnetic field of about 0.1 T across the layers enables to observe collective Shapiro step response corresponding to a synchronization of all 50 intrinsic Josephson junctions (IJJ) of the mesa. At high microwave power we observed up to 10th harmonics of the fundamental Shapiro step. Besides, we found microwave induced flux-flow step position of which is proportional to the square root of microwave power and that can exceed at high enough powers 1 THz operating frequency of IJJ oscillations.

Layered high-temperature superconducting materials, such as Bi2Sr2CaCu208 (Bi-2212), are composed of superconducting Cu02 double layers coupled by a Josephson interaction. This unique system exhibits the Josephson effects at the atomic scale. The discovery of intrinsic Josephson effects in these superconductors [1] opens up a new nanoscale route for developing superconducting electronics. For many applications the important requirement is to provide synchronization of Josephson oscillations in elementary junctions of the stack. This synchronization can be probed by Shapiro step response of the stack to the external microwaves since the voltage position of collective response indicates the number of synchronized junctions.

The first experiments on THz response of Bi-2212 stacks have shown that IJJs can operate up to frequencies of 2.5 THz [2], however, they are not effectively coupled by electric field across the stack due to the screening effects [3]. As a result, each elementary IJJ responds to the microwaves individually [2].

More effective coupling of IJJs can be provided by magnetic field parallel to the layers [4]. Collective Shapiro step of 60 IJJs synchronized by parallel magnetic field has been observed in subterahertz frequency range [5]. However, to operate at 150 GHz one needs to apply quite high parallel field of about 2.5 T.

In the present paper we demonstrate the alternative way to synchronize IJJs to subterahertz radiation using much lower magnetic field of the order of 0.1 T oriented across the layers.

The structures have been fabricated by double sided processing of thin Bi-2212 single crystal whiskers by focused ion beam (FIB). We simplified the method described in Ref. [6]. The stages of fabrication are shown in Fig.l. First, the square groove with the depth of half of the crystal thickness d is etched and marked at the corners (Fig.la). The depth is controlled by one half etching time of the same area to the full thickness. Second, a crystal is turned over and another square groove is made on the other side of crystal near the first one, aligned against the markers (Fig.lb). The depth of the second groove slightly exceeds d/2. At the third stage the structure is trimmed as shown in Fig.lc and the junction is formed between cutting lines. Typical structure had lateral sizes of about 1 /¿m x 1 //111 and contained 20-100 JJs along the c-axis. Before the second processing the crystal has been glued to the MgO substrate by solution of collodion in amyl acetate. A collodion then has been removed from the top of the crystal by oxygen discharge. The four golden contact pads have been evaporated and annealed before FIB processing to avoid diffusion of Ga-ions into the mesa. The substrate with a mesa has been mounted in the optical cryostat. Magnetic field of 0.1-0.2 T was provided by a small perma-

nent magnet placed under the substrate. The 100-GHz radiation from Gunn oscillator has been focused on the sample by the hemispheric Si-lens. The I—V characteristics have been measured with the low noise oscilloscope in the shielded room. Typically mesa had resistance at room temperature about 200 Ohm and critical current density at 4.2 K about lkA/cm2.

Fig.2a shows a set of the I—V characteristics of Bi-2212 mesa at 5 K with an increase of microwave power. The first prominent feature is an appearance of a big voltage step with a sharp increase of current at nearly constant voltage. The voltage position of this step Vff increases proportionally to the square root of microwave power P (Fig.3) while the current height of the step remains unchanged (Fig.2a). This step resembles the Josephson flux-flow (JFF) step that appears in steady magnetic field oriented parallel to the layers [7] and is often referred to as microwave induced JFF step.

Another remarkable feature is an appearance of Shapiro-type steps on the I—V characteristics at voltages nVo, where n is an integer and Vq = 10 mV corresponds to the Josephson relation Fo = Nhv/2e with v the frequency and N = 50 the number of IJJs in the

mesa. Those steps are smaller than microwave induced JFF step. The heights of Shapiro steps, AIn, and of critical current Ic oscillate with microwave power (Fig.4), the steps with even n and n = 0 oscillating in-phase with each other and out of phase with those of odd n. That behaviour is typical for Shapiro steps [8]. The position of

netic field induced by microwave current [9]. This idea hardly explains our data since that requires the presence of incredibly high parallel fields of several Tesla.

To explain our main results: synchronization of IJJ and terahertz operating frequencies under small perpendicular field of 0.1 T we consider the following qualitative model. As known, at low temperatures perpendicular magnetic field of about 0.1 T drives Bi-2212 system close to the transition into the vortex glass state [13]. This state is characterized by a disappearance of the hysteresis of the I—V characteristics [14]. In that state pancake vortex lines become highly entangled as schematically shown in Fig.5. That leads to the ap-

pearance in a system of Josephson vortices (JVs) and antivortices. Lorentz force induced by currents applied across the layers directly affects only JVs. Therefore, due to the weak attractive interaction between JVs and pancake vortex lines [15], the motion of JVs may be considered as a motion in a quasiperiodic washboard potential with a periodicity of pancake vortex lines [16]. The pancake vortex lines piercing the whole thickness of the mesa form aligned periodic potential in different IJ Js and thus synchronize the motion of Josephson vortices in the whole mesa. For H± = 0.1 T the spacing between pancake vortex lines A ~ (#0/H±)1^2 ~ 0.15/tm. That provides terahertz washboard frequency for easily achievable velocity of JVs 10® ^107 cm/s. Note for comparison that to achieve the same periodicity in Joseph-son vortex lattice by parallel field Ify that requires about 10 T (#|| = #0/sA., with s = 1.5 nm the spacing between superconducting layers).

Two types of characteristic modes appear in this model. First one corresponds to the washboard fre-

quency and equals to the n times of the external frequency where n is the number of periods which JV travels in one cycle of the microwave current. That is proportional to the amplitude of microwave current or P1/