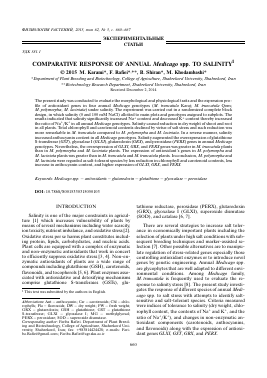 Salinity is one of the major constraints in agriculture [1] which increases vulnerability of plants by means of several mechanisms including water scarcity, ion toxicity, nutrient imbalance, and oxidative stress [2]. Oxidative stress per se harms plant constitutes including protein, lipids, carbohydrates, and nucleic acids. Plant cells are equipped with a complex of enzymatic and non-enzymatic antioxidants that work in concert to efficiently suppress oxidative stress [3, 4]. Non-enzymatic antioxidants of plants are a wide range of compounds including glutathione (GSH), carotenoids, flavonoids, and tocopherols [5, 6]. Plant enzymes associated with antioxidative and detoxifying mechanisms comprise glutathione S-transferases (GSTs), glu-

There are several strategies to increase salt tolerance in economically important plants including the selection of plants under high salt conditions with subsequent breeding techniques and marker-assisted selection [7]. Other possible alternatives are to manipulate regulation of stress-related genes especially those controlling antioxidant enzymes or to introduce novel genes by genetic engineering. Annual Medicago spp. are glycophytes that are well adapted to different environmental conditions. Among Medicago family, M. truncatula is frequently used to evaluate the response to salinity stress [8]. The present study investigates the response of different species of annual Medicago spp. to salt stress with attempts to identify saltsensitive and salt-tolerant species. Criteria measured were indices of tolerance to salinity (dry weight, chlorophyll content, the contents of Na+ and K+, and the ratio of Na+/K+), and changes in non-enzymatic antioxidant components (carotenoids, anthocyanins, and flavonoids) along with the expression of antioxi-dant genes GLXI, GST, GRX, and PERX.

Plant material and growth conditions. This study was conducted in a two-month trial. Seeds of Medicago laciniata, and M. polymorpha were obtained from Iranian Forest, Range and Watershed Organization (www.frw.org.ir). Seeds of M. truncatula Karaj and M. truncatula Qom were provided by Iranian Seed and Plant Improvement Institute (www.spii.ir). Karaj and Qom are the names of habitat of the plants. All seeds were scarified in concentrated sulfuric acid for 5 min and rinsed 4—5 times with distilled water. To ensure uniform germination, scarified seeds were placed in Petri dishes and stored for 1 day at 24 °C in greenhouse. Germinated seedlings were transferred to germination trays containing a mixture of coco peat : per-lite in 70 : 30 ratio, and grown in greenhouse. After a week, the plantlets were transferred to specific containers (40 x 50 x 25 cm) filled with Hoagland solution. Hoagland medium used to irrigate the plantlets was gradually concentrated on weekly basis so that its concentration was 25% in the week 1 and reached 100% in the week 3.

Subsequently, salt stress treatment (100 mM NaCl) was applied in a four-week-period trail. Salt was dissolved in Hoagland solution to provide a saline solution with the concentration of 100 mM NaCl. The control plant samples were not exposed to salinity. Each container had triplicates of all four Medicago genotypes. None of the genotype was nodulated. One month after salinity exposure, seven plants were sampled from each replicate (21 plants per treatment) to measure weights of dried shoot and dried root as well as physiological traits including contents of chlorophyll (Chl), carotenoids (Car), anthocyanins (Ant), and Na+ and K+ in shoots and roots.

Dried tissues (DW) were used for measuring contents of Na+ and K+ in the digested samples using flame photometer.

Photosynthetic pigments (Chl) were quantified spectrophotometrically in acetone extracts and calculated as mg/g fresh weight (FW) [9]. The content of the carotenoids (Car) was calculated as mg/g FW using the Lichtenthaler equations [9].

Anthocyanins (Ant) were extracted from oven-dried tissue samples of leaves. In brief, 0.1 g of dried powder was suspended in 10 mL volume of acidified methanol (methanol : H2O : HCl, 79 : 20 : 1, v/v) and auto-extracted at 0°C for 72 h. After centrifugation, the absorbance was measured at 530 and 657 nm for each supernatant. Anthocyanin content was calculated by formula [10]:

Flavonoid (Fla) also was expressed as absorbance at 300 nm and Fla content calculated as A300/g DW [10].

RNA extraction, cDNA synthesis and RT-PCR. Samples of roots and leaves for transcriptome analysis were harvested 24 h after salinity treatment. Each sam-

In the current study, the antioxidant genes including GST, GLXI, GRX, and PERX were selected based on analysis of microarray data, GSE14029 including GSE13921 and GSE13907 (available in NCBI). These microarray data conducted by Li et al. [11] and included data from transcriptome analysis of M. truncatula cv. A17 in salt stress condition. The relevant TAIR annotation (homolog genes in Arabidopsis) for these genes, obtained using Plant Expression Database (www.plexdb.org/mod-ules/gl Suite/gl_main.php). FASTA sequence of the mRNA encoding GST, GLXI, GRX, and PERX were downloaded from PLEXdb and blasted against M. truncatula genome in NCBI (BLASTN).

Using NCBI database, mRNA sequence of XM_003623148.1 (923 bp) was selected as candidate gene for GST, and BT146528 (953 bp) having GLXI as conserved domain, was selected as candidate for GLXI. XM_003602413.1 (1023 bp) and XM_003636842.1 (1298 bp) considered as candidates for PERX, and GRX, respectively. Specific primers were designed for each gene by means of Beacon Designer Software (table 1). Before RT-PCR step, normal PCR was used for checking the specificity of the designed primers. The efficiency of designed primers, and melting curve were also determined. Mt Actin considered as internal control gene in RT-PCR.