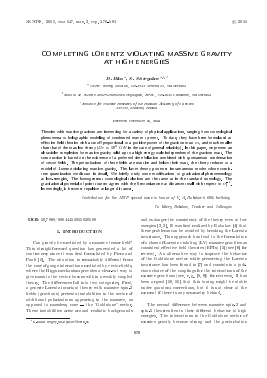 '"Institute for Nuclear Research of the Russian Academy of Sciences 117312, Moscow, Russia

Theories with massive gravitons are interesting for a variety of physical applications, ranging from cosmological phenomena to holographic modeling of condensed matter systems. To date, they have been formulated as effective field theories with a cutoff proportional to a positive power of the graviton mass rng and much smaller than that of the massless theory (Mp « 101H GeV in the case of general relativity). In this paper, we present an ultraviolet completion for massive gravity valid up to a high energy scale independent of the graviton mass. The construction is based on the existence of a preferred time foliation combined with spontaneous condensation of vector fields. The perturbations of these fields are massive and below their mass, the theory reduces to a model of Lorentz violating massive gravity. The latter theory possesses instantaneous modes whose consistent quantization we discuss in detail. We briefly study some modifications to gravitational phenomenology at low-energies. The homogeneous cosmological solutions are the same as in the standard cosmology. The gravitational potential of point sources agrees with the Newtonian one at distances small with respect to mj1. Interestingly, it becomes repulsive at larger distances.

Cwitribvtiwi for the JETP special issue in honor of V. A. Rubakov's 60th birthday

Can gravity bo mediated by a massive tensor field? This straightforward question has generated a lot of controversy since it was first formulated by Fiorz and Pauli [1]. The situation is remarkably different from the case of gauge interactions mediated by vector fields, where the Higgs mechanism provides a clear-cut way to give mass to the vector bosons within a weakly coupled theory. The differences fall into two categories. First, a generic Lorentz invariant theory with massive spin-2 fields (gravitons) presents instabilities in the sector of additional polarizations appearing in the massive, as opposed to massless, case the "Goldstono" sector. These instabilities arise around realistic backgrounds

To Valery Rubakov, Teacher and Colleague

and endanger the consistency of the theory even at low energies [2, 3]. It was first realized by Rubakov [4] that these problems can be avoided by breaking the Lorentz invarianco. This approach has lead to the formulation of a class of Lorentz violating (LV) massive gravities as consistent effective field theories (EFTs) [5] (see [6] for review). An alternative way to improve the behavior of the Goldstono sector while preserving the Lorentz invarianco has been found in [7] and consists in a judicious choice of the couplings for the interactions of the massive gravitons (see, e.g., [8, 9]) for reviews). It has been argued [10, 11] that this tuning might be stable under quantum corrections, but it is not clear at the moment if there is any symmetry behind.

The second difference between massive spin-2 and spin-1 theories lies in their different behavior at high energies. The interactions in the Goldstono sector of massive gravity become strong and the perturbation

theory breaks down at a certain cutoff scale1) A/mt, depending on the graviton mass mg. In the limit of vanishing rilctSS, this scale goes down to zero and, instead of recovering the massless case, the theory ceases to exist. In fact, the same is also true for a pure theory of massive vector fields with non-abelian interaction. However, in the latter case the ultraviolet (UV) completion is known in the form of the Higgs mechanism which makes the theory renormalizable by adding a handful of new degrees of freedom (Higgs bosons). Importantly, in the resulting theory, the massless limit is perfectly smooth and corresponds to the restoration of the spontaneously broken gauge symmetry2).

No such mechanism has been found so far for massive gravity3^. Of course, in this case one cannot insist on an embedding into a fully UV complete theory the massless theory being non-renormalizable anyway with the cutoff at the Planck IIlclSS MP « 101B GeV (see, however, Sec. 3.1). Still, it makes sense to search for a setup, whose cutoff would be independent of the graviton mass and as close to the Planck scale as possible. To preserve the analogy with the Higgs mechanism, the embedding theory must contain only a finite number of new degrees of freedom compared to massive gravity itself4^, these degrees of freedom must be weakly coupled and the limit mg —¥ 0 must be regular. The goal of this work is to present a setup fulfilling the above requirements.

The reasons for pursuing this endeavor are not merely academic. First, massive gravity is a very natural candidate for an infrared (IR) modification of general relativity (GR) [14]. Such modifications are an interesting playground to look for alternatives to the cosmological constant as the source of cosmic acceleration (see, e.g., [15]). The acceleration may be gener-

11 Throughout the paper, we identify the cutoff with the strong coupling scale of the perturbation theory around the Minkowski background. In the setup of [7], the scale of strong coupling may be raised in curved space-time due to the Vainshtein mechanism (see the discussion in [9]). However, the validity of the corresponding backgrounds is under debate [12].

2! From a purist's viewpoint, no symmetry is broken in the Higgs mechanism, gauge invariance being just a redundancy in the description. However, we allow ourserves this abuse of terminology because of its clear intuitive meaning.

i! Exceptions are theories in AdS where the mass of the graviton can appear due to non-trivial conditions at the time-like boundary [13 15]. However, these constructions rely heavily on the peculiar properties of the AdS geometry. In particular, the resulting graviton mass is always parametrically smaller than the inverse AdS radius.

'4) This excludes the known theories with massive spin-2 fields, such as Kaluza Klein models or string theory: both imply the presence of an infinite tower of new degrees of freedom with masses of order A¡ow.

ated at the level of the background (new contribution to the Fricdmann equation) or of perturbations (weaker or repulsive gravitational potential at distances larger than nig1). It is fair to say that none of these possibilities have been satisfactory implemented so far in concrete models. In any event, any candidate to explain cosmic acceleration should have a completion at high energies, which is important for predictions related to the early universe or very dense objects. This can also allow to understand the relevance of certain tunings of the IR parameters. We will see how a concrete ultraviolet completion can have nontrivial consequences at very large distances.

Massive gravity has also been discussed in the context of the gauge/'gravity correspondence [16, 17]. Various phases of massive gravity may be useful to describe different phenomenology at strong coupling. In particular, it was recently realized that LV massive gravity is relevant for the description of systems with broken translational invariance [18, 19]. The completion of the theory to smaller distances on the gravity side yields access to the operators of higher dimensions in the strongly coupled field theory5).

Finally, the theory of massive gravity is related to the spontaneous breaking of space-time symmetries [5,20]. This is an appropriate language to describe different states of matter within the EFT framework [21, 22]. One can speculate that the Higgs mechanism for massive gravity will be relevant to describe the phase transitions in such systems.

In this paper, we will focus on the LV massive gravity of [4, 5]. Our main motivation for this choice is the already mentioned validity of this theory as a low-energy EFT, whose structure is protected by symmetries. Besides, the fundamental role of Lorentz invariance in quantum gravity has been questioned recently [23]. It is interesting to explore if massive gravity can be naturally embedded in this framework6). We will assume that at the fundamental level the violation of Lorentz invariance is minimal and amounts to the existence of a preferred foliation of space time [23, 25]. It is worth noting that the presence of superluminal propagation [26 28] in the seemingly Lorentz invariant massive gravity of [7] makes a Lorentz invariant Wilso-nian UV completion of this theory problematic [29]. Thus, even in this case, the UV completion (if any) is likely to be Lorentz violating.

The paper is organized as follows. In Sec. 2, we briefly summarize the formalism of LV massive gravity

j) We thank Riccardo Rattazzi for the discussion of this point. c>) See [24] for an early attempt in this direction.

and define the phase that we will consider. In Sec. 3, we introduce the UV completion that allows pushing the cutoff of the theory to values close to Mp. We analyze the background solutions of the theory in Sec. 4 and show that the LV massive gravity of Sec. 2 appears in the IR limit. Section 5 is devoted to the analysis of the degrees of freedom in the theory at different scales. We also discuss in some detail the quantization of instantaneous modes present in the LV massive gravity and their relation to a certain type of non-locality along the spatial directions. First results in phenomenology are presented in Sec. 6. We conclude with the summary and discussion in Sec. 7.

and 50(3) spatial rotations. A simple Lagrangian that obeys the imposed symmetries and admits the VEVs (2) has the form8)