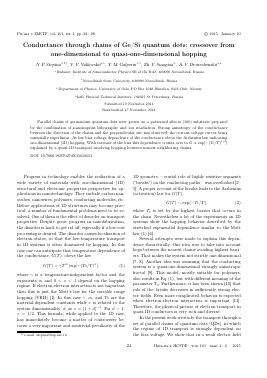 Parallel chains of germanium quantum dots were grown on a patterned silicon (100) substrate prepared by the combination of nanoimprint lithography and ion irradiation. Strong anisotropy of the conductance between the direction of the chains and the perpendicular one was observed; the current-voltage curves being essentially superlinear. At low bias voltage dependence of the conductance obeys the Arrhenius law indicating one-dimensional (ID) hopping. With increase of the bias this dependence crosses over to G cx exp[— (To/T)1//2] explained by a quasi-lD transport involving hopping between nearest neighboring chains.

Progress in technology enables the realization of a wide variety of materials with one-dimensional (ID) structural and electronic properties perspective for applications in nanotechnology. They include carbon nan-otubes, nanowires, polymers, conducting molecules, etc. Before applications of ID structures may become practical, a number of fundamental problems need to be resolved. One of them is the effect of disorder on transport properties. Despite great progress in nanofabrication, the disorder is hard to get rid off, especially if a low-cost processing is desired. The disorder causes localization of electron states, so that the low-temperature transport in ID systems is often dominated by hopping. In this case one can anticipate that temperature dependence of the conductance, G(T), obeys the law

where 7 is a temperature-independent factor and the exponents to and 0 < x < 1 depend on the hopping regime. If electron-electron interaction is not important then this is just the Mott's law for the variable range hopping (VRH) [1]. In this case 7, to, and To are the material-dependent constants while x is related to the system dimensionality, d, clS X — (1 + d)-1. For d = 1, x = 1/2. This formula, while applied to the ID case, has immediately become a matter of controversy because a very important and nontrivial peculiarity of the

ID geometry - crucial role of highly resistive segments ("breaks") on the conducting paths - was overlooked [25]. A proper account of the breaks leads to the Arrhenius (activation) law for G(T),

where T\ is set by the highest barrier that occurs in the chain. Nevertheless a lot of the experiments on ID systems show the hopping behavior described by the stretched exponential dependence similar to the Mott law (1) [6].

Several attempts were made to explain this dependence theoretically. One idea was to take into account hops between the nearest chains avoiding highest barriers. That makes the system not strictly one-dimensional [7, 8]. Another idea was assuming that the conducting system is a quasi-one-dimensional strongly anisotropic fractal [9]. This model, mostly suitable for polymers, also results in Eq. (1), but with different meaning of the parameter To- Furthermore, it has been shown [10] that role of the breaks decreases in sufficiently strong electric fields. Even more complicated behavior is expected when electron-electron interaction is important [11]. Therefore, the physical picture of electron transport in quasi-ID conductors is very rich and diverse.

In the present work we study the transport through a set of parallel chains of quantum dots (QDs), in which the regime of ID transport is strongly dependent on the bias voltage. We show that in a weak electric field

Fig. 1. (a) - AFM image of the structure under study, (b) - Temperature dependence of conductance measured along (1) and perpendicular (2) to the wires at bias voltage of 0.5 V

the hole transfer is limited by highly resistive tunneling barriers ("breaks") leading to the activation (Arrhenius) law (2), whereas increase of the bias voltages leads to a crossover to the variable range hopping (1). We call this regime the quasi-lD transport.

The samples under study were grown on a (001) p-Si substrate with a resistivity of 20 Q ■ cm by molecular-beam epitaxy (MBE) of Ge. Before growth the pre-patterning of the Si surface was carried out using the original approach based on the combination of nanoini-print lithography [12] and ion irradiation proposed in our resent work [13]. After this process a periodically striped structure was observed, with the relief height about 30 nm and period about 180nm.

Further molecular beam epitaxy (MBE) of Ge on the pre-patterned Si surface allowed us to create parallel wires of QDs with their one-dimensional density controlled by the growth regimes. 1 nm-thick Ge layer was deposited at 600 °C with a rate of 0.005 nm/s. To supply holes to the dots, a B-(5-doped Si layer was inserted 15nm above the Ge QDs layer. The silicon cap layer has a thickness of 40 nm. A1 metal source and drain electrodes were deposited on the top of structure and heated at 480 °C. The distance between the contacts was about 0.05 mm. The resistance both along and perpendicular to the QD chains was measured by the two-terminal method with a Iveithley 6514 electrometer. A similar procedure carried out for a plain Si surface in which a 2D layer of QDs was formed leads to formation of very high quality Ohmic contacts with resistance much smaller that the resistance of the sample. Therefore, we expect that in our structure the measured conductance is determined by the transport via QDs. The temperature stability was controlled using Ge thermometer. Our

The Atomic Force Microscopy (AFM) image of a typical second-type structure is shown in Fig. la. This part of the structure does not contain visible bridges.

In this paper we focus on the second-type structures where anisotropy of the conductance reaches 2-4 orders of magnitude. Measurements were performed on 4 samples and in what follows we demonstrate typical behaviors.

Shown in Fig. 2a are temperature dependences of the conductance measured at different bias voltages. Current-voltage curves at different temperatures are presented in Fig. 2b. They demonstrate a super-linear behavior typical for the hopping conductance [14, 15, 10]. It is a consequence of "tilting" of the potential by electric field leading to decrease of the effective barriers between the sites and facilitation inter-site transitions.

We have verified that the observed non-Ohmic behavior cannot be explained by heating of charge carriers involved in diffusive transport [16]. A hallmark of that

regime is a universal relation between the conductance, dissipated power and temperature [17]. This relation is not met in our system. Based on combination of the above facts we conclude that the observed non-Ohmic behavior of conductance is due to the increase of the hopping probability and impact ionization that are the characteristic features of the hopping behavior.

To identify the hopping mechanism the temperature dependences of the conductance for the bias voltages of 0.7 and 1.5 V (Fig. 3) were analyzed using the method of the reduced activation energy [18]. Along this approach, we assume that the temperature dependence of the conductance is given by Eq. (1) and present the logarithmic derivative w = d In G(T)In T as the combination m + x(To/T)x containing 3 adjustable parameters. If m <C x(To/T)x then In w(T) oc xlnT, so the slope of the In w-versus-ln T dependence provides the hopping exponent x.

A typical plot for the bias of 0.7 V is given as inset in the upper panel of Fig. 3. In the range 7-1.6 K the G(T) dependence is well described by the Arrhe-nius law (x = 1) that typical for the strong localized

ID regime determining by the most resistive break in the wire. The activation energy was determined to be 0.8 meV. Increase of the bias voltage changes the behavior of conductance in such a way that in the temperature range 4-13 K the exponent x is close to 0.5 (lower panel of Fig. 3) corresponding to the Mott's law in a ID system. That happens, in part