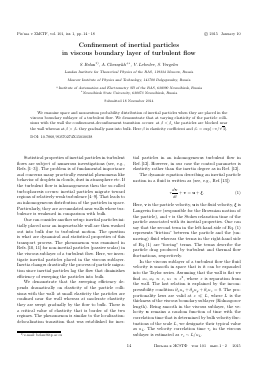 We examine space and momentum probability distribution of inertial particles when they are placed in the viscous boundary sublayer of a turbulent flow. We demonstrate that at varying elasticity of the particle collisions with the wall the confinement-deconfinement transition occurs: at ¡3 < /3C the particles are blocked near the wall whereas at ¡3 > ¡3C they gradually pass into bulk. Here ¡3 is elasticity coefficient and ¡3C = exp(—-k/\fi).

Statistical properties of inertial particles in turbulent flows are subject of numerous investigations (see, e.g., Refs. [1-3]). The problem is of fundamental importance and concerns many practically essential phenomena like behavior of droplets in clouds, dust in atmosphere etc. If the turbulent flow is inhomogeneous then the so-called turbophoresis occurs: inertial particles migrate toward regions of relatively weak turbulence [4-9]. That leads to an inhomogeneous distribution of the particles in space. Particularly, they are accumulated near walls where turbulence is weakened in comparison with bulk.

We demonstrate that the sweeping efficiency depends dramatically on elasticity of the particle collisions with the wall: at small elasticity the particles are confined near the wall whereas at moderate elasticity they are swept gradually by the flow to bulk. There is a critical value of elasticity that is border of the two regimes. The phenomenon is similar to the localization-delocalization transition that was established for iner-

tial particles in an inhomogeneous turbulent flow in Ref. [12]. However, in our case the control parameter is elasticity rather than the inertia degree as in Ref. [12].

The dynamic equation describing an inertial particle motion in a fluid is written as (see, e.g., Ref. [13])

In the viscous sublayer of a turbulent flow the fluid velocity is smooth in space that is it can be expanded into the Taylor series. Assuming that the wall is flat we find ux/uy (X z, uz (X z2, where z is separation from the wall. The last relation is explained by the incom-pressibility condition dxux + dyuy + dzuz = 0. The proportionality laws are valid at z < L, where L is the thickness of the viscous boundary sublayer (Kolmogorov length). Being smooth in the viscous sublayer, the velocity u remains a random function of time with the correlation time that is determined by bulk velocity fluctuations of the scale L, we designate their typical value as ul. The velocity correlation time rc in the viscous sublayer is estimated as rc ~ L/ul.

We examine the case where the velocity correlation time tc in the viscous sublayer is much less than the Stokes time r. By other words, the Stokes number St, defined as St = r/rc, is large. Therefore both, the random velocity u and the Langevin force can be treated as short correlated in time (as white noises). Then statistical properties of the "forcing" in Eq. (1) are characterized by the following correlation functions

where angular brackets mean averaging over time and k is the particle diffusion coefficient. One can say that the expression (2) determines the turbulent diffusion, the factor p can be estimated as p ~ ul/L3. Analogous expressions can be written for the velocity components

Comparing the expressions (2) and (3), one finds the scale rd = (n/p)1^4 = L/Pe1^4. Here Pe is Peclet number defined as Pe = rK/rc, where rK = L2/k is the characteristic diffusion time in the viscous layer. The scale rd determines the thickness of the diffusion boundary sublayer formed near the wall: at z < r^ the particle diffusion dominates whereas at z > ra the turbulent diffusion does. There is another scale in the problem, z* = l/y/Jrf = L/VSt. At z < z* the "friction" term v in Eq. (1) dominates over the ballistic term rdv/dt whereas at z > z* the last one dominates. Particles delay essentially from the fluid motion here. We assume the following set of inequalities: r^ <C 2* L.

There is a closed description of the particle motion along Z-direction in terms of its coordinate 2 and v = = vz = dz/dt. Since both the flow velocity and the Langevin force are short correlated in time, it is possible to derive from Eq. (1) the Fokker-Planck equation for the probability density of a particle distribution in the z, v-space, p(z, v). Then J dzdv p = 1. Alternatively, p can be treated as the particle density in the z, v-space, if one considers an ensemble of large number of particles. Then the integral /dzdvp is equal to the total number N of the particles.

The Fokker-Planck equation (4) has to be supplemented by boundary conditions. We assume that p(z, v) tends to zero fast enough as v —> ±00 and 2 —> 00. Next, a boundary condition at the wall (at z = 0) should be posed. We consider the case of partly inelastic scattering, assuming that the particle loses a definite part 1 — /3 of its velocity along the Z-axis after each collision with the wall, where ¡3 is some factor, (3 < 1. Then

The factor /3~2 in Eq. (5) is related to the particle number (or probability) conservation: the outcoming flux pv dv for positive v should coincide with the incoming flux for —v//3.

Integrating over v the Fokker-Planck equation (4), one obtains the local conservation law dtn = —dzj. Here, the particle density n(z) and the particle flux j(z) in Z-direction are defined as the integrals

Below we demonstrate that regimes with zero and nonzero flux j can be realized. However, even the non-zero flux is relatively small. That means validity of a quasi-stationary approach since then all parameters of the system vary slowly in time and the distribution p(z,v) adjusts adiabatically to the parameters.

Let us explain qualitatively the distribution of the inertial particles in the viscous sublayer. Majority of particles are accumulated in the diffusion sublayer, at z < rd, where they undergo the Brownian motion. Some particles are distributed in the layer ra < z < z* where a z-dependent Maxwellian distribution is formed. The most fast particles move at larger z, where the particles form strongly non-equilibrium distribution. The fast particles undergo random acceleration due to the fluid velocity fluctuations. However, the fluctuations force the particles to move toward the wall from time to time. Collisions with the wall lead to losing particles' energy. The balance between the acceleration and the losses determines the result. If /3 is small then the losses dominate and the particle velocity diminishes in average. Then the flux is zero. If ¡3 is moderate then the random acceleration dominates and the particle velocity increases in average. Then fast particles can reach z larger than L escaping to bulk. In this case the particle flux to large 2 is non-zero. Below we show, that the two regimes are separated by the critical value of /3, ¡3C = exp(—7t/a/3).

~ %/St/Pe ' C 1. The last inequality enables us to neglect the term with r^ in Eq. (4) for z ra- Due to the adiabaticity we neglect also the term with the time derivative in Eq. (4). Then we turn to the following stationary equation

that determines the particle distribution in our setup.

We see that the typical v is of order z2 that justifies our attention to the limit v <C 2. The Eq. (9) has an "local equilibrium" (quasi-Maxwellian) solution

where the factor at the exponent can be esta