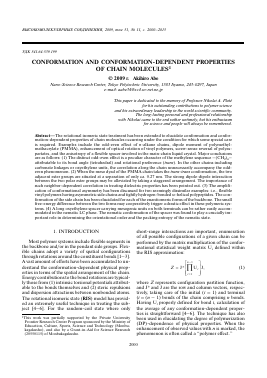 This paper is dedicated to the memory of Professor Nikolai A. Plate for his outstanding contributions to polymer science and his extraordinary leadership in the world scientific community.

The long-lasting personal and professional relationship with Nikolai came to the end rather untimely, but his enthusiasm for science and people will always be remembered.

Abstract—The rotational isomeric state treatment has been extended to elucidate conformation and conformation-dependent properties of chain molecules occurring under the condition for which some special care is required. Examples include the odd-even effect of n-alkane chains, dipole moment of polymethyl-mathacrylate (PMMA), enhancement of optical rotation of vinyl polymers, screw-sense reversal of polyas-partates, and the anisotropy of a flexible spacer involved in the main-chain liquid crystal. Major conclusions are as follows: (1) The distinct odd-even effect is a peculiar character of the methylene sequence —(CH2)n— attributable to its bond angle (tetrahedral) and rotational preference (trans). In the other chains including carbonate linkages or oxyethylene units, the correlation along the chain unnecessarily accompany the odd-even phenomenon. (2) When the meso dyad of the PMMA chain takes the trans-trans conformation, the two adjacent ester groups are situated at a separation of only ca. 0.27 nm. The strong dipole-dipole interaction between the two polar ester groups may be alleviated by taking a staggered arrangement. The importance of such neighbor-dependent correlation in treating dielectric properties has been pointed out. (3) The amplification of conformational asymmetry has been discussed for two seemingly dissimilar examples: i.e., flexible vinyl polymers having asymmetric side chains and tightly hydrogen-bonded a-helical polypeptides. The conformation of the side chain has been elucidated for each of the enantiomeric forms of the backbone. The small free-energy difference between the two forms may cooperatively trigger a drastic effect in these polymeric systems. (4) A long oxyethylene spacer carrying mesogenic units on both terminals can be rather easily accommodated in the nematic LC phase. The nematic conformation of the spacer was found to play a crucially important role in determining the orientational order and the packing entropy of the nematic state.

Most polymer systems include flexible segments in the backbone and/or in the pendant side groups. Flexible chains adopt a variety of spatial configurations through rotations around the constituent bonds [1—3]. A vast amount of efforts have been accumulated to understand the conformation-dependent physical properties in terms of the spatial arrangement of the chain. Energy contributions to the bond rotations are typically those from (1) intrinsic torsional potentials attributable to the bonds themselves and (2) steric repulsions and dispersion attractions between nonbonded atoms. The rotational isomeric state (RIS) model has provided an extremely useful technique in treating the subject [4—6]. For the random-coil state where only

short-range interactions are important, enumeration of all possible configurations of a given chain can be performed by the matrix multiplication of the confor-mational statistical weight matrix Ui defined within the RIS approximation:

1This work was partially supported by the Private University Frontier Research Center Program sponsored by the Ministry of Education, Culture, Sports, Science and Technology (Monbu-kagakusho), and also by a Grant-in-Aid for Science Research (20550115) of Monbukagakusho.

where Z represents configuration partition function, and J* and J are the row and column vectors, respectively, taking care of the initial (i = 1) and terminal (i = (n — 1) bonds of the chain comprising n bonds. Having U properly defined for bond i, calculation of the average of any conformation-dependent properties is straightforward [4—6]. The technique has also been used in elucidating the degree of polymerization (DP)-dependence of physical properties. When the enhancement of observed values with n is marked, the phenomenon is often called a "polymer effect."

Departure from the random-coil condition requires some elaboration in estimating the conformational partition function. Examples include the conformation of flexible side chains articulated from the backbone [5, 6] or chain molecules involved in an ordered fluid [7]. When necessary, appropriate simulation techniques have been adopted to estimate the ensemble of existing conformers to take account of the long-range perturbation exerted by the surrounding field.

For a variety of conventional polymers, the constant-volume entropy change at the melting has been empirically found to be in good agreement with those calculated within the RIS approximation. Although the technique is well accepted for long chain molecules [8], the physical basis of such an entropy treatment is somewhat controversial [9]. In addition to the ambiguities inherent to the physical concept, the determination of thermodynamic quantities such as the latent heat and the volume change at the transition is often hampered by the fact that the crystalline state of chain molecules is quite complex. The polymer crystals are usually polycrystalline coexisting with the disordered amorphous domain. An accurate estimation of the equilibrium melting temperature defined for a perfectly aligned crystal requires a great effort [8, 10]. At the melting temperature, equilibrium usually exists between the isotropic liquid (I) and somewhat imperfect crystalline phases (C). In the last section of this article, the nematic (N) conformation and the phase transitions of segmented chain molecules, often called main-chain liquid crystals (LC) are mentioned. The uncertainties associated with the CI phase transition should be greatly relieved for the NI phase equilibrium. The nematic mesophase is highly fluid, yet accommodating various conformations of chain segments. The NI phase transition is essentially a liquid-to-liquid and usually of the first-order. It is advantageous to work with these fluid systems to settle the controversy. The results of the analysis seem to support the validity of the aforementioned entropy separation hypothesis.

2. ODD-EVEN CHARACTERISTIC OF CHAIN MOLECULES - ORIENTATIONAL CORRELATION ALONG THE CHAIN

(X = halogens, esters) are known to exhibit an odd-even oscillation when plotted against the number of intervening methylene units [11-13]. The relative orientation of the terminal dipoles must reflect the characteristics of the intervening hydrocarbon sequences. The average of the square of the molecular dipole moment ^ may be given as

where m is the magnitude of the bond dipole moment inherent to the terminal bond, and 8 is the disorientation angle defined by the two terminal dipoles. For a freely jointed chain, (cos 8) = 0. For a freely rotating chain with a tetrahedral bond angle, (cos 8) = (1/3)n. In Fig. 1, experimental values are plotted for X = Br [11] and Cl [12]. For comparison, those for a,«-dihy-droperfluoro-n-alkanes H(CF2)nH are also included [14]. The difference between the simpler model (curves 1 and 2) and the real chain immediately suggests that the correlation between the directions of the two terminal dipoles depends on the number of intervening bonds. The odd-even oscillation observed in the dilute isotropic solution rapidly attenuates with n, indicating that the effect is limited for lower members. The observed characteristics of these a,«-disubstitut-ed chain molecules have been analyzed within the framework of RIS approximation [14-16].

More precise bond vector analyses [17] have been carried out to study the orientational correlation of bonds in flexible chains. The chain vector connecting

the ends of the chain was evaluated in the internal reference frames defined by the first two bonds of each chain. Persistence lengths along the first bond were estimated to be 0.58 nm for polymethylene (PM) [18], 0.67 nm for polyoxymethylene (POM) [19], and 0.36 nm for polyoxyethylene (POE) [19]. The result for PM is consistent with the aforementioned odd-even character of hydrocarbon chains.

2.2. Compatibility of Flexible Chains with the Nematic Order

Flexible chains, which tend to form a random coil in the isotropic state, are highly incompatible with the LC order. Phase equilibrium studies indicate that chain molecules are very disruptive and thus allowed to exist only to a limited amount in LCs [20, 21]. The result