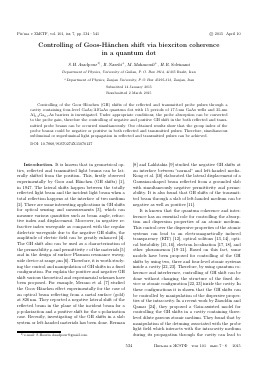 in a quantum dot

Introduction. It is known that in geometrical optics, reflected and transmitted light beams can be laterally shifted from the position. This, firstly observed experimentally by Goos and Hänchen (GH shifts) [1], in 1947. The lateral shifts happen between the totally reflected light beam and the incident light beam when a total reflection happens at the interface of two medium [2]. There are some interesting applications in GH shifts for optical sensing and measurements [3], which can measure various quantities such as beam angle, refractive index and displacement. Moreover, in negative refractive index waveguide as compared with the regular dielectric waveguide due to the negative GH shifts, the amplitude of electric field can be greatly enhanced [4]. The GH shift also can be used as a characterization of the permeability n and permittivity e of the materials [5] and in the design of surface Plasmon resonance waveguide device at range /1111 [6]. Therefore, it is worth studying the control and manipulation of GH shifts in a fixed configuration. For explain the positive and negative GH shift various theoretical and experimental schemes have been proposed. For example, Merano et al. [7] studied the Goos-Hänchen effect experimentally for the case of an optical beam reflecting from a metal surface (gold) at 826 nm. They reported a negative lateral shift of the reflected beam in the plane of the incident beam for a p-polarization and a positive shift for the s-polarization case. Recently, investigating of the GH shifts in a slab system or left-handed materials has been done. Berman

[8] and Lakhtakia [9] studied the negative GH shifts at an interface between "normal" and left-handed media. Kong et al. [10] elaborated the lateral displacement of a Gaussian-shaped beam reflected from a grounded slab with simultaneously negative permittivity and permeability. It is also found that GH shifts of the transmitted beam through a slab of left-handed medium can be negative as well as positive [11].

It is known that the quantum coherence and interference has an essential role for controlling the absorption and dispersion properties of an atomic medium. This control over the dispersive properties of the atomic systems can lead to an electromagnetically induced transparency (EIT) [12], optical solitons [13,14], optical bistability [15,16], electron localization [17,18], and other phenomenon [19-21]. Based on this fact, some models have been proposed for controlling of the GH shifts by using two, three and four-level atomic systems inside a cavity [22,23]. Therefore, by using quantum coherence and interference, controlling of GH shift can be done without changing the structure of the fixed device or atomic configuration [22,23] inside the cavity. In these configurations it is shown that the GH shifts can be controlled by manipulation of the dispersive properties of the intracavity. In a recent work by Ziauddin and Qamar [24], they proposed a Gain-assisted model for controlling the GH shifts in a cavity containing three-level dilute gaseous atomic medium. They found that by manipulation of the detuning associated with the probe light field which interacts with the intracavity medium during its propagation through the cavity can lead to

a control over negative and positive GH shift in the reflected and transmitted light beam via the anomalous and normal dispersion of the medium.

Recently, many kinds of phenomena based on the quantum interference and coherence have also been extensively studied in the semiconductors quantum wells (SQW). For the intersubband transitions in SQW, we can say that it behaves as an artificial atom [25]. Therefore many interesting phenomena based on quantum coherence and interference in SQWs has been discussed, such as optical bistability [26-30], four-wave mixing [3133], Kerr nonlinearity [34,35], and others [36-48]. The devices based on intersubband transitions in the SQW have many inherent advantages such as the large electric dipole moments due to the small effective electron mass, the great flexibilities in devices design by choosing the materials and structure dimensions, the high nonlinear optical coefficients. The majority of the theoretical analyses of the above works in SMQWs are based on atomic quantum coherence theory [49]. A complete description of many-body effect such as Coulomb interaction between charged carriers has not been considered. It is known that in direct-gap semiconductors, excitons play an essential role in optical processes near the fundamental band edge. It has been shown that excitonic non-radiative coherence, including exciton spin coherence and biexciton coherence, can lead to EIT processes in quantum wells [36-38]. By predominant the rapid decoherence with ultra fast laser pulses and by using and restrains the many-body Coulomb interactions, the realization of the excitonic EIT processes in QWs has been made possible. With intersubband coherence between different conduction subbands [39-41] and different valance subbands [42], and with intervalence band coherence between the heavy-hole (HH) and light-hole (LH) valance bands [43,44], EIT processes have also been observed. Various EIT processes have also been explored experimentally [45] as well as theoretically in QDs [46-48].

herence in a multiple quantum well nanostructure [51]. We showed that biexciton energy renormalization which resulted from biexciton coherence can change the intensity threshold of optical bistability and multistability. In another study, phase control of optical bistability and multistability based biexciton coherence were also discussed [52]. Following the similar scheme, we here study the behavior of the GH shifts for the corresponding su-perluminal and also for the subluminal propagation of the light through the intracavity medium. Here, a four-level GaAs/AlGaAs as semiconductor structure with 15 periods of 17.5 nm GaAs layer and 25-nm Alo.3Gao.7As barriers is used as an intracavity. It is found that biexciton coherence and relative phase of applied fields has a major role on controlling GH shifts of probe beams reflected from or transmitted through a cavity.

Model and equation. Three layers with a structure ABA can be considered as a model of cavity. Two side layers A, with the same thickness dA and permittivity £a are nonmagnetic dielectric slabs and are considered as walls of the cavity. Layer B is the intracavity medium with thickness de and permittivity £b (Fig. 1). The gas atoms [27] or semiconductor layer [48] can be used as an intracavity medium. The intracavity medium consists of four-level biexciton-exciton cascade scheme of GaAs/AlGaAs quantum dot with 15 periods of 17.5 nm GaAs wells and 25-nm Alo.3Gao.7As barriers. A TE-polarized light beam with angular frequency uj is incident on one side of the cavity which is in the vacuum with permittivity £0 = 1. The incident pulse makes an angle 9 with the z-axis. This field is either reflected back or transmitted through the cavity with a lateral shifts (GH shifts). Generally, the electric and magnetic fields at two positions 2 and 2 + Az in the jth layer can be related to each other via a transfer matrix as:

vector in jth layer, ky is the y component of wave vector in vacuum k = uj/c. Here, c is the speed of light in vacuum, and parameter qj is defined as qj = k3z/k. dj is the thickness, and j represents the jth layer of the medium. Since the cavity has three layers, the total transfer matrix of the cavity is given by:

where, X(ky, uj) represents the total transfer matrix connecting the fields at incident end and at the exit end.

Fig. 1. (a) (color online) - Schematic diagram of the GH shifts of the reflected and transmitted light beams in a fixed cavity. The cavity contains a four-level GaAs/AlGaAs quantum dot with 15 periods of 17.5 nm GaAs wells and 25-nm Alo.3Gao.7As barriers. Sr, St are the refle