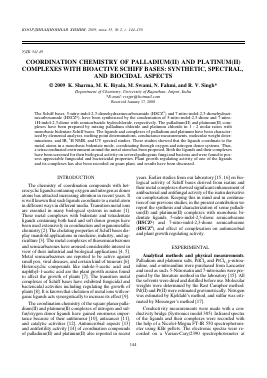 The Schiff bases, 5-nitro-indol-2,3-dionehydrazinecarboxamide (HSCZ1) and 7-nitro-indol-2,3-dionehydrazi-necarboxamide (HSCZ2), have been synthesized by the condensation of 5-nitro-indol-2,3-dione and 7-nitro-1H-indol-2,3-dione with semicarbazide hydrochloride, respectively. The palladium(II) and platinum(II) complexes have been prepared by mixing palladium chloride and platinum chloride in 1 : 2 molar ratios with monobasic bidentate Schiff bases. The ligands and complexes of palladium and platinum have been characterized by elemental analyses, melting point determinations, conductance measurements, molecular weight determinations, and IR, 1H NMR, and UV spectral studies. These studies showed that the ligands coordinate to the metal atoms in a monobasic bidentate mode, coordinating through oxygen and nitrogen donor systems. Thus, a tetracoordinated environment around the metal atom has been proposed. Both the ligands and their complexes have been screened for their biological activity on several pathogenic fungi and bacteria and were found to possess appreciable fungicidal and bactericidal properties. Plant growth regulating activity of one of the ligands and its complexes has also been recorded on gram plant, and results have been discussed.

The chemistry of coordination compounds with heterocyclic ligands containing oxygen and nitrogen as donor atoms has attracted increasing attention in recent years. It is well known that such ligands coordinate to a metal atom in different ways in different media. Transition metal ions are essential in many biological systems in nature [1]. These metal complexes with bidentate and tetradentate ligands containing both hard and soft donor groups have been used extensively in coordination and organometallic chemistry [2]. The chelating properties of Schiff bases display manifold applications in medicine, industry, and agriculture [3]. The metal complexes of thiosemicarbazones and semicarbazones have aroused considerable interest in view of their industrial and biological applications [4, 5]. Metal semicarbazones are reported to be active against small pox, viral diseases, and certain kind of tumours [6]. Heterocyclic compounds like indole-3-acetic acid and naphthyl-1-acetic acid are the plant growth auxins found to affect the growth of plants [7]. The transition metal complexes of Schiff bases have exhibited fungicidal and bactericidal activities including regulating the growth of plants [8]. It is known that chelation of metal ions with organic ligands acts synergistically to increase its effect [9].

The coordination chemistry of the square planar palla-dium(II) and platinum(II) complexes of nitrogen and sulfur/oxygen donor ligands have gained enormous importance because of their antitumour [10], anticancer [11], and catalytic activities [12]. Antimicrobial aspects [13] and antifertility activity [14] of coordination compounds of palladium(II) and platinum(II) also reported in recent

years. Earlier studies from our laboratory [15, 16] on biological activity of Schiff bases derived from isatins and their metal complexes showed significant enhancement of antibacterial and antifungal activity of the isatin derivative on complexation. Keeping this in mind and in continuation of our previous studies, in the present contribution we report the synthesis and characterization of some palladi-um(II) and platinum(II) complexes with monobasic bidentate ligands, 5-nitro-indol-2,3-dione semicarbazone (HSCZ1) and 7-nitro-indol-2,3-dione semicarbazone (HSCZ2), and effect of complexation on antimicrobial and plant growth regulating activity.

Palladium and platinum salts, PdCl2 and PtCl2, p-nitroa-niline, and o-nitroaniline were purchased from Lancaster and used as such. 5-Nitroisatin and 7-nitroisatin were prepared by the literature method in the laboratory [15]. All the solvents were dried and distilled before use. Molecular weights were determined by the Rast Camphor method. Pd(II) and Pt(II) were estimated gravimetrically. Nitrogen was estimated by Kjeldahl's method, and sulfur was estimated by Messenger's method [17].

Conductivity measurements were made with a conductivity bridge (Systronics model 305). Infrared spectra of the ligands and their complexes were recorded with the help of a Nicolet-Megna FT-IR 550 spectrophotom-eter using KBr pellets. The electronic spectra were recorded on a Varian-Cary/2390 spectrophotometer at

Table 1. Elemental analysis data and some physical properties of the ligands and their complexes

RSIC, I.I.T., Chennai. XH NMR spectra were recorded on a Hitachi Perkin Elmer spectrometer in DMSO-d6 at 300 MHz using TMS as the internal standard at the Delhi University (New Delhi).

The antifungal activity was evaluated against Alternaría alternata and Fusarium oxysporum using Czapek's agar medium having the composition: glucose 20 g, starch 20 g, agar-agar 20 g, and distilled water 1000 ml. To this medium was added a requisite amount of the compounds after being dissolved in dimethylformamide so as to get a certain concentration (50, 100, and 200 ppm). The medium then was poured into Petri plates, and the spores of fungi were placed on the medium with the help of inoculum's needle. These Petri plates were wrapped in polythene bags containing a few drops of alcohol and were placed in an incubator at 30 ± 2°C. The controls were also run, and three replicates were used in each case. The linear growth of the fungus was recorded by measuring the diameter of the fungal colony after 96 h, and the percentage inhibition was calculated by the equation:

where C and T are the diameters of the fungal colony in the control and the test plates, respectively [18].

compounds were dissolved in methanol for obtaining concentrations of 500 and 1000 ppm. The filter paper discs were soaked in these solutions, dried, and then placed in the Petri plates previously seeded with the test organisms. The plates were incubated for 24 h at 28 ± 2°C, and inhibition zone around each disc was measured.

In the first experiment, seeds were treated with an aqueous solution of the synthesized complexes by the following germination test method. The germination was followed by the Towel Paper method. Two brown-colored towel papers of equal size (46 x 27 cm) for each test were jointly soaked in different concentrations (1, 5, 10, and 25 ppm) of the ligand and its complexes for treated experiments and in water for controlled experiment for 4 h and placed over a butter paper (39 x 25 cm). One hundred seeds were placed at an equal distance over the towel papers, which were subsequently covered by another moist towel paper (46 x 27 cm). Then the towel paper was rolled up, two ends of the towel paper tied lightly with a rubber band and placed in a germination chamber at 25 ± 1°C. One hundred seeds were used for each sample. The observations for percent germination and normal seedling were recorded on the 4th and 8th days. The seedlings, which possessed the ability to develop into fully normal and healthy plants, were considered as normal seedlings.

In the second experiment, the seeds were treated with physiologically active concentration of the plant growth regulators solution for 6 h at room temperature and drying them to the original moisture level by a hot air circulating oven. After that, uniform size seeds were placed on whatman no. 1 filter paper lying in the glass petri plates. Each petri plate has 15 seeds placed at equidistance. The filter papers were moistened with fresh solutions of required concentrations. The concentrations of the plant growth regulators used were 1, 5, 10, and 25 ppm.

Synthesis of the ligands. The ligands HSCZ1 and HSCZ2 were prepared by the condensation of semicarba-zide hydrochloride with 5-nitro-indol-2,3-dione and 7-ni-tro-indol-2,3-dione in the presence of sodium acetate in a 1 : 1 molar ratio in ethanol. The reaction mixture was then refluxed over a water bath for 3-4 h, and allowed to stand overnight. The products were recrystallized from the solvent eth