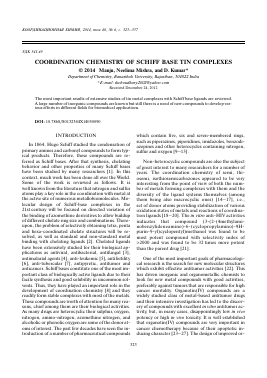 The most important results of extensive studies of tin metal complexes with Schiff base ligands are reviewed. A large number of inorganic compounds are known but still there is a need of new compounds to develop various efforts in different fields for biomedical applications.

In 1864, Hugo Schiff studied the condensation of primary amines and carbonyl compounds to form typical products. Therefore, these compounds are referred as Schiff bases. After that synthesis, chelating behavior and other properties of many Schiff bases have been studied by many researchers [1]. In this context, much work has been done all over the World. Some of the work is reviewed as follows. It is well known from the literature that nitrogen and sulfur atoms play a key role in the coordination with metal at the active site of numerous metallobiomolecules. Molecular design of Schiff-base complexes in the 21st century will be focused on directed variation of the binding of azomethine derivatives to allow buildup of different chelate ring size and combinations. Thereupon, the problem of selectively obtaining tetra, penta and hexa-coordinated chelate structures will be resolved, as well as standard and non-standard metal binding with chelating ligands [2]. Chelated ligands have been extensively studied for their biological applications as antiviral, antibacterial, antifungal [3], antimalarial agents [4], anti-leukemic [5], antifertility [6], anti-tubercular [7], antipyretic, antitumor and anticancer. Schiff bases constitute one of the most important class of biologically active ligands due to their facile synthesis and good solubility in uncommon solvents. Thus, they have played an important role in the development of coordination chemistry [8] and they readily form stable complexes with most of the metals. These compounds are worth of attention for many reasons, chief among them are their biological activities. As many drugs are heterocyclic their sulphur, oxygen, nitrogen, amino-nitrogen, azomethine nitrogen, and alcoholic or phenolic oxygen are some of the donor atoms of interest. The past few decades have seen the introduction of a number of pharmaceutical compounds

which contain five, six and seven-membered rings, such as piperazines, piperidines, imidazoles, benzodi-azepines and other heterocycles containing nitrogen, sulfur and oxygen [9—13].

Non-heterocyclic compounds are also the subject of great interest to many researchers for a number of years. The coordination chemistry of semi, thi-osemi, isothiosemicarbazones appeared to be very interesting from the point of view of both the number of metals forming complexes with them and the diversity of the ligand systems themselves (among them being also macrocyclic ones) [14—17], i.e., set of donor atoms providing stabilization of various oxidation states of metals and reactions of coordination ligands [18—20]. The in vitro anti-HIV activities indicates that compound (3-(2-(4methylami-nobenzylideneamino)-6-(cyclopropylamino)-9H-purin-9-yl)cyclopentyl)methanol was found to be most potent compound with selectivity index of >2000 and was found to be 32 times more potent than the parent drug [21].

One of the most important goals of pharmacological research is the search for new molecular structures which exhibit effective antitumor activities [22]. This has driven inorganic and organometallic chemists to look for new metal compounds with good activities, preferably against tumors that are responsible for high cancer mortality. Organotin(IV) compounds are a widely studied class of metal-based antitumor drugs and their intensive investigation has led to the discovery of compounds with excellent in vitro antitumor activity, but, in many cases, disappointingly low in vivo potency or high in vivo toxicity. It is well established that organotin(IV) compounds are very important in cancer chemotherapy because of their apoptotic inducing character [23—27]. The design of improved or-

Fig. 1. Structure of some benzothiazoles based drugs.

ganotin(IV) antitumour agents occupies a significant place in cancer chemotherapy, as revealed from their remarkable therapeutic potential reflected in recent research reports. The binding ability of organotin(IV) compounds towards DNA depends on the coordination number and nature of the groups bonded to the central tin atom. The phosphate group of DNA sugar backbones usually acts as an anchoring site and the nitrogen of DNA base binding is extremely effective, this often resulting in the stabilization of the tin center as an octahedral species. Low doses of organotins can exhibit anti-tumoural activity [28—30] and have suggested an action mode via a gene-mediated pathway in the cancer cells, opening a new research sub-area on orga-notin(IV) compounds. The chemical and biochemical aspect of DNA inhibition, including biotechnological aspects of organotin(IV) cancer chemotherapy, has also been described. When organotin(IV) halides are dissolved in water, the pH of the solution decreases dramatically because they are converted slowly into organotin(IV) hydroxides and then to bis(triorgano-tin)oxides or diorganotin oxides. In contrast, di- and tri-organotin(IV) carboxylates do not suffer from this disadvantage and generally remain intact in water for long periods, i.e., days. Consequently, a large number of organotin(IV) carboxylates have been investigated for their antitumor potential. Among organotin(IV) carboxylates, triorganotin(IV) carboxylates are quite well known as bactericides and fungicides and subsequently several such derivatives were found to be potent when screened for their cytotoxicity [31—36].

Scope of Schiff base ligands. Parkinson's disease (PD) is the most common neurodegenerative movement disorder, characterized by a specific loss of dopaminergic neurons in the substantia nigra pars compacta and affecting the population above the age

of 60 years [37]. Benzothiazoles are highly interesting molecules for drug development, because they are known to be useful for treating neurodegenerative disorders [38]. Among the most efficient compounds, lubeluzole has been shown experimentally to preserve neurological function and reduce infarct volume in animal models of focal brain ischemia [39], while other derivatives, such as KHG21834 were capable of protecting PC12 cells and cortical and mesencephalic neurons from amyloid b-induced degeneration [40].

In addition, the study of naphthalene derivatives has become of much interest in recent years on account of their antioxidant and antiparkinsonian activities. Many anticancer and anti-bacterial drugs are known to behave as versatile ligands [41] some of which exhibit increased anticancer activity when administered in the complex form with the metal ions [42, 43]. It has been suggested [44] that certain type of cancers are caused by viruses. The interaction between metal ion and their ligands with cancer associated viruses might represent an important route in designing [45] new anticancer therapies for tumors that becomes resistant to the conventional drugs. A recent methodology to design novel antiviral therapies is achieved by coordinating a metal ion from an important biomolecule, for instance a zinc finger protein with antiviral agent, usually containing sulphur functionalities with good complexing behavior. All these observations have attracted our attention to report antibacterial thiazole derived Schiff bases [46]. The structure of all these compounds is shown in Fig. 1.

Physico-chemical properties of Schiff base complexes of tin. Tin complexes exhibit a broad spectrum of biological activities and are studied in view of their structural diversity and their possible biological applications. In this regard, compounds which exhibit anti-

microbial [47], anti-inflammatory [48], bactericidal [49, 50], cardiovascular [51], biocidal [52], antitubercular [53], antifungal [54], and cytotoxic [55—58] biological activity have been described. Different complexes have been investigated in the search of treatments for diseases, such as trypanosomiasis [59] and jaundice [60]. The chemistry of organostannyl carboxylates is one of the most fascinating fields, and pyridine tin carboxylates are the focus of many studies due to their different coordination geometries and their structural diversity, which depends upon the reaction conditions. The 2,6-pyridine dicarboxylic acid reacts with diorganotin oxide or diorganotin diacetate, thereby generated structures with a pentagonal bipyramidal environment [61—68]. Interestingly, the presence of alkaline alkoxides favors the formation of complexes with octahedral geometry [69]. The reaction of 2,5-pyridinedicarboxylic acid with dimethyl, dibutyl or diphenyl tin oxides gives cyclotrimeric or polymeric seven-coordinated tin derivatives [70]. In addition, the 2,4/3,4 and 3,5-pyridine dicarboxylates react with organotinchlorides giving oligomeric structures with distorted trigonal bipyramidal geometries

Some organotin complexes derived from picolinic acid possess octahedral or five-coordinated TBP structures, where the carboxylate acts as a monoden-tate ligand [72, 73]. It has been reported that seven-coordinated tin complexes exhibit higher activity towards some cancer cell lines when the 2,6-pyridine carboxylate moiety is part of the molecule [74]. Other studies have focused on the structural aspects of the hypervalent species of the Schiff-based