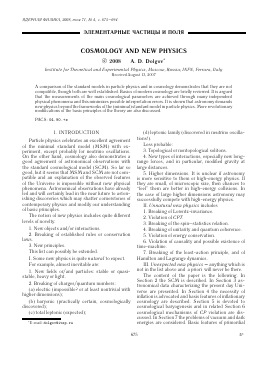 A comparison of the standard models in particle physics and in cosmology demonstrates that they are not compatible, though both are well established. Basics of modern cosmology are briefly reviewed. It is argued that the measurements of the main cosmological parameters are achieved through many independent physical phenomena and this minimizes possible interpretation errors. It is shown that astronomy demands new physics beyond the frameworks of the (minimal) standard model in particle physics. More revolutionary modifications of the basic principles of the theory are also discussed.

Particle physics celebrates an excellent agreement of the minimal standard model (MSM) with experiment, except probably for neutrino oscillations. On the other hand, cosmology also demonstrates a good agreement of astronomical observations with the standard cosmological model (SCM). So far so good, but it seems that MSM and SCM are not compatible and an explanation of the observed features of the Universe is impossible without new physical phenomena. Astronomical observations have already led and will certainly lead in the near future to astonishing discoveries which may shatter cornerstones of contemporary physics and modify our understanding of basic principles.

The notion of new physics includes quite different levels of novelty:

I. Some new physics is quite natural to expect.

For example, almost inevitable are:

(a) electric (impossible? or at least nontrivial with higher dimensions);

3. Breaking of the spin—statistics relation.

4. Breaking of unitarity and quantum coherence.

6. Violation of causality and possible existence of time-machine.

7. Breaking of the least-action principle, and of Hamilton and Lagrange dynamics.

III. Unexpected new physics — anything which is not in the list above and a priori will never be there.

nucleosynthesis are briefly presented in Section 8. Formation of astronomical large-scale structures is discussed in Section 9. In Section 10 cosmological manifestations of the violation of spin—statistics theorem for neutrinos are considered. In Section 12 we conclude.

As we have already mentioned in Introduction, the strongest demand for new physics comes from cosmology. In this connection a natural questions arise: how reliable is the SCM? How much we can trust it? The answers to both questions are positive. In the following short few-page review we will advocate this statement. More detailed recent reviews on the basics of the modern cosmology can be found in [1].

The SCM is very simple and quite robust. The theoretical setting is the following:

1. General relativity describing gravitational interactions. It is very difficult (if possible) to modify this theory at large distances without breaking some well-established fundamental physical principles.

2. Assumption (or one can say, observational fact) of homogeneous and isotropic distribution of matter in the early Universe in zeroth approximation. This is supported by the smoothness of the cosmic microwave background radiation with the accuracy better than 10-4. Perturbations are treated in the first order analytically or numerically stimulated when perturbations rise up to unity.

3. Knowledge of cosmic particle content and form of their interaction. Sometimes equation of state is sufficient:

The Hubble parameter is time dependent, H ~ 1/t, where t is the Universe age. The famous Hubble law is already here:

where V is the velocity of a distant object (which is not gravitationally bound with our Galaxy or local galactic cluster) and l is the distance to it.

The equations which govern the Universe expansion, i.e., time dependence of the cosmological scale factor a(t) are the following:

where mPl = 1.2 x 1019 GeV is the Planck mass. The Newton gravitational coupling constant is expressed through it as GN = m-2.

Equation (4) looks as the second Newton law describing the acceleration of a test body induced by matter inside radius a. An important fact is that not only mass (energy) creates gravitational force but also pressure. It allows for accelerated expansion, if (p + 3p) < 0. As is usual in general relativity, for distances l larger than the inverse Hubble parameter, i.e., for l > 1/H, the expansion becomes superlumi-nal. These two effects are necessary for making the Universe suitable for our life.

Equation (2) looks as the conservation of energy of a test body:

with pj and pj being pressure and energy densities of matter. In fact there are different forms of matter with different equations of state which is indicated by index j here.

The metric describing an isotropic and homogeneous space has the form:

The rate of the cosmological expansion is characterized by function a(t) or more precisely by its logarithmic derivative called the Hubble parameter:

If multiplied by a2/2, the l.h.s. is the kinetic energy, while the first term in r.h.s. is negative potential energy, and the second term is just a constant.

The critical (or closure) energy density is defined

It is equal to real total energy density for spatially flat Universe, that is for k = 0.

A more adequate variable which is often used instead of time is the red-shift, z:

where a(t0) is the value of the scale factor at the present time, so the value of red-shift today is z = = 0. For adiabatic expansion, z is equal to the ratio

of cosmic microwave background radiation (CMBR) temperature at some earlier time with respect to its present day value (see below).

There is one more very important equation, though not an independent one, namely, the covariant energy—momentum conservation,

In our special homogeneous and isotropic case it looks as

General relativity implies automatic conservation of T^v (9), due to the Einstein equations:

Indeed, the covariant divergence of the l.h.s. identically vanishes and so must . This is a result of general covariance, i.e., invariance of physics with respect to an arbitrary choice of the coordinate frame.

In recent (and not so recent) literature there are some papers, where the assumption of time-dependent "constants" is considered, in particular, time-dependent gravitational coupling constant, Gn = GN(t) and cosmological constant Л(Ь) (about the latter see below Section 7). The authors of these works use there the same standard Einstein equations (11) with nonconstant mPl. Enforcing the condition of conservation of the Einstein tensor, , and the energy—momentum tensor of matter, T^v, the authors derive some relations between GN(t) and Л({). However, this procedure is at least questionable. If the Einstein equations are derived as usually by functional differentiation of the total action with respect to metric, SA/Sg^ = 0, then the equation must contain additional terms proportional to (second) derivatives of GN over coordinates. If the least-action principle is rejected, then there is no known way to deduce an expression for the energy—momentum tensor of matter.

The equations of state are usually parametrized as p = wp. (12)

In many practically interesting cases parameter w is constant but it is not necessarily true and it may be a function of time. In this case to determine w(t) one has to solve dynamical equation(s) of motion for the corresponding field(s).