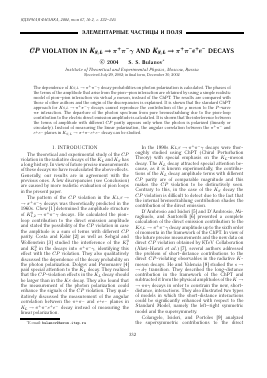 The dependence of KS,L — n+n-y decay probabilities on photon polarization is calculated. The phases of the terms of the amplitude that arise from the pion—pion interaction are obtained by using a simple realistic model of pion—pion interaction via virtual p meson, instead of the ChPT. The results are compared with those of other authors and the origin of the discrepancies is explained. It is shown that the standard ChPT approach for KS,L — n+n-y decays cannot reproduce the contribution of the p meson to the P-wave nn interaction. The departure of the photon spectrum from pure bremsstrahlung due to the pion-loop contribution to the electric direct emission amplitude is calculated. It is shown that the interference between the terms of amplitude with different CP parity appears only when the photon is polarized (linearly or circularly). Instead of measuring the linear polarization, the angular correlation between the n+n- and e+e- planes in KS,L — n+n-e+e- decay can be studied.

The theoretical and experimental study of the CP violation in the radiative decays of the KL and Ks has a long history. In view of future precise measurements of these decays we have recalculated the above effects. Generally, our results are in agreement with the previous ones. A few discrepancies (see Conclusion) are caused by more realistic evaluation of pion loops in the present paper.

The pattern of the CP violation in the KL,s — — n+n-Y decays was theoretically predicted in the 1960s. Chew [1] determined the amplitude structure of K0 2 — n+n y decays. He calculated the pion-loop contribution to the direct emission amplitude and stated the possibility of the CP violation in case the amplitude is a sum of terms with different CP parity. Costa and Kabir [2] as well as Sehgal and Wolfenstein [3] studied the interference of the K0 and K0 in the decays into n+n-Y, identifying this effect with the CP violation. They also qualitatively discussed the dependence of the decay probability on the photon polarization. Dolgov and Ponomarev [4] paid special attention to the KL decay. They realized that the CP-violation effects in the KL decay should be larger than in the Ks decay. They also found that the measurement of the photon polarization could enhance the signals of the CP violation. They qualitatively discussed the measurement of the angular correlation between the n+n- and e+e- planes in KL — n+n-e+e- decay instead of measuring the linear polarization.

In the 1990s KL,S — n+n-y decays were thoroughly studied using ChPT (Chiral Perturbation Theory) with special emphasis on the KL-meson decay. The KL decay attracted special attention because, as it is known experimentally, the contributions of the KL decay amplitude terms with different CP parity are of comparable magnitude and this makes the CP violation to be distinctively seen. Contrary to this, in the case of the Ks decay the CP violation is difficult to detect due to the fact that the internal bremsstrahlung contribution shades the contribution of the direct emission.

D'Ambrosio and Isidori [5] and D'Ambrosio, Mi-ragliuolo, and Santorelli [6] presented a complete calculation of the direct emission contribution to the KSl — n+n-y decay amplitude up to the sixth order of momenta in the framework of the ChPT. In view of the future precise measurements and the new data on direct CP violation obtained by KTeV Collaboration (Alavi-Harati et al.) [7], several authors addressed the problem of short-distance contributions to the direct CP-violating observables in the radiative K-meson decays. He and Valencia [8] studied the s —

— dY transition. They described the long-distance contribution in the framework of the ChPT and subtracted it from the physical amplitudes of the K —

— nnY decays in order to constrain the new, short-distance, interactions. They also illustrated two types of models in which the short-distance interactions could be significantly enhanced with respect to the Standard Model, namely the left—right symmetric model and the supersymmetry.

Colangelo, Isidori, and Portoles [9] analyzed the supersymmetric contributions to the direct

tributions of s — dY as well as gluonic, s — dg, transitions to the direct CP-violating observables in the framework of two models: left—right symmetric model and the supersymmetry.

The experimental studies of the KL decay were reported in [11-13]. In 1980 Carrol et al. [11] first observed both the internal bremsstrahlung and the direct emission contributions in the KL decay. Ramberg et al. [12] in 1993 presented more precise measurements of the pattern of the CP violation in the KL decay. Kettell [13] summarized the recent more precise results.

In regard to the future higher precision experiments on the CP violation it is important to study in more detail the properties of the phases caused by the nn interaction in the KL,S — n-Y decays. More precise calculation of these phases is the prerequisite

for extracting the precise values of the CP-violating parameters in the K-meson decays.

In the present paper we calculate the probability of the KS,L — n-Y decays, using instead of the ChPT a simple realistic model of nn interaction via virtual p meson, proposed by Lee and Vaughn [16] for the purposes of studying the P-wave resonance in the nn scattering. This model was elaborated in [1] for the purposes of describing the electric direct emission in the K — 2nY decays. In the framework of this model we shall derive the phases of the amplitude terms, connected with the nn interaction. According to the approach used in [1], we shall show that the phase of the electric direct emission amplitude is not equal to the phase of the nn scattering in the P wave, which could be expected according to the final state interaction theorem formulated by Watson [17], Fermi [18], Fubini, Nambu, and Wataghin [19]. This happens due to the fact that the interaction of pions occurs not in the final state, but in the intermediate state.

We shall calculate the departure of the photon spectrum from bremsstrahlung due to the pion-loop contribution to the direct emission amplitude in the Ks decay. Then we shall compare our results on the photon energy dependence of the interference between the internal bremsstrahlung and the electric direct emission in the Ks decay with the results of [5, 15] obtained in the framework of ChPT. It will be proved that the "interference branching ratio" differs from the one obtained in [15] (see the table) and that the standard ChPT approach even with higher order counterterms taken into account cannot reproduce the contribution of the p meson. If the counterterm contributions are set to zero (kf = 0), the result of the present paper and the one obtained in [15] for the "interference branching ratio" are in agreement for the photon energy cut u > 20 MeV. However, for the photon energy cuts u > 50 MeV and u > 100 MeV the discrepancy appears. It is due to the fact that the photon spectra of the interference contributions differ. This can be clearly seen from Fig. 1, where the

Fig. 1. The photon energy dependence of the interference contribution. The result of the present paper is represented by solid curve; the results of ChPT — by dashed curves.

result of the present paper (solid curve) along with the results of [15] (dashed curves, kf = —0.5, 0, +0.5) for the photon spectra of the interference contributions are shown.