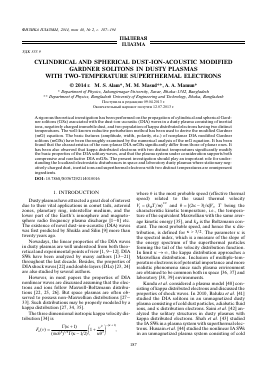 A rigorous theoretical investigation has been performed on the propagation of cylindrical and spherical Gardner solitons (GSs) associated with the dust-ion-acoustic (DIA) waves in a dusty plasma consisting of inertial ions, negatively charged immobile dust, and two population of kappa distributed electrons having two distinct temperatures. The well-known reductive perturbation method has been used to derive the modified Gardner (mG) equation. The basic features (amplitude, width, polarity, etc.) of nonplanar DIA modified Gardner solitons (mGSs) have been thoroughly examined by the numerical analysis of the mG equation. It has been found that the characteristics of the non-planar DIA mGSs significantly differ from those of planar ones. It has been also observed that kappa distributed electrons with two distinct temperatures significantly modify the basic properties of the DIA solitary waves, and that the plasma system under consideration supports both compressive and rarefactive DIA mGSs. The present investigation should play an important role for understanding the localized electrostatic disturbances in space and laboratory dusty plasmas where stationary negatively charged dust, inertial ions and superthermal electrons with two distinct temperatures are omnipresent ingredients.

Dusty plasmas have attracted a great deal of interest due to their vital applications in comet tails, asteroid zones, planetary ring, interstellar medium, and the lower part of the Earth's ionosphere and magnetosphere radio frequency plasma discharge [1—8] etc. The existence of novel dust-ion-acoustic (DIA) waves was first predicted by Shukla and Silin [9] more than twenty years ago.

Nowadays, the linear properties of the DIA waves in dusty plasmas are well understood from both theoretical and experimental points ofview [1, 9—12]. DIA SWs have been analyzed by many authors [13—21] throughout the last decade. Besides, the properties of DIA shock waves [22] and double layers (DLs) [23, 24] are also studied by several authors.

However, in most papers the properties of DIA nonlinear waves are discussed assuming that the electrons and ions follow Maxwell-Boltzmann distributions [22, 25, 26]. But space plasmas are often observed to possess non-Maxwellian distributions [27— 33]. Such distributions may be properly modeled by a kappa distribution [27, 34, 35].

Vt = (kBT/m)1/2 and 0 = [(2k- 3)/kV, T being the characteristic kinetic temperature, i.e., the temperature of the equivalent Maxwellian with the same average kinetic energy [35], and kB is the Boltzmann constant. The most probable speed, and hence the k distribution, is defined for k > 3/2. The parameter k is the spectral index, which is a measure of the slope of the energy spectrum of the superthermal particles forming the tail of the velocity distribution function. In limit k ^ to , the kappa distribution approaches a Maxwellian distribution. Inclusion of multiple-temperature electrons is of potential importance and more realistic phenomena since such plasma environment are obtained to be common both in space [36, 37] and laboratory [38, 39] environments.

inertial ions and kappa distributed electrons. In both of the works [43, 44], the presence of dust particles is not considered.

The interactions of multiple ions or electrons are not considered in many of the above investiagations [13-16, 20, 21, 27-33, 40]. Some theoretical investigations [25, 26, 45-47] have also been performed on the SWs in plasmas including thermally different multiple electrons or ions. Devanandhan etal. [48] studied the electron-acoustic SWs in a three-component un-magnetized plasma composed of hot electrons (kappa distributed), fluid cold electrons and ions having finite temperatures. Bedi and Gill [49] investigated the electron-acoustic SWs in a collisionless infinite homogeneous and unmagnetized plasma system consisting of cold and hot (kappa distributed) electrons. Sultana et al. [50] analyzed the electron acoustic solitary structures in a magnetized plasma consisting of stationary ions, hot (kappa distributed) electrons and cold electrons. In 2011, Baluku et al. [51] investigated the characteristics of electron-acoustic waves (EAWs) in plasmas whose electron velocity distributions are modeled by a combination of bi-kappa distributed electrons (double kappa electrons) with distinct densities, temperatures, and k values. In the next year, Baluku and Hellberg [52] studied the existence domains and characteristics of IA solitons in a two temperature electron plasma with both electron components are kappa distributed, as observed in Saturn's magnetosphere [51, 52]. However, the existence of dust particles whether static or moving is not discussed in these articles [51, 52] too. All of this previous studies [25, 26, 41, 43-52] are limited to a planar (one-dimensional) geometry which may not be a realistic situation in space and laboratory devices, since, in many situations, the waves observed in space or laboratory devices are certainly not infinite (unbounded) in one dimension. The examples of nonplanar geometries of practical interest are capsule implosion (spherical geometry), shock tube (cylindrical geometry), star formation, supernova explosions, etc. Recently, several authors are interested in studying and analyzing the properties of nonpla-nar DIA waves [21, 5-56].

To the best of our knowledge, no theoretical investigation has yet been performed on the properties of DIA cylindrical and spherical SWs in a dusty plasma system where distinct temperature superthermal electrons have been considered. Thus, we focus on cylindrical and spherical DIA SWs in an unmagnetized two-electron temperature dusty plasma obeying kappa distribution each, and show how the DIA SWs in cylindrical and spherical geometries differ qualitatively from that in one-dimensional planar geometry. It is important to mention that we have taken higher order nonlinear equation which is quite valid around critical value of dust density ratio of typical dusty plasma parameters, since at critical value the K-dV soliton can not be formed due to infinite large amplitude solitary structures. To overcome this we have followed a higher

The manuscript is organized as follows. The governing equations are provided in Sec. 2. The mG equation is derived by using the reductive perturbation method in Sec. 3. The analytical and numerical solutions are presented in Sec. 4. A brief discussion is finally given in Sec. 5.

We consider a nonplanar (cylindrical or spherical) geometry, and nonlinear propagation of the DIA waves in an unmagnetized dusty plasma system comprising of inertial ions, negatively charged immobile dust, and two populations of kappa distributed electrons having different thermal effects. Thus, at equilibrium, na = nel0 + ne20 + Zdnd0, where ni0 is the unperturbed ion number density, ne10 (ne20) is the density of unperturbed lower (higher) temperature electron, nd0 is the unperturbed dust number density, and Z d is the number of electrons residing on the dust grain surface.

We are interested here in the nonlinear propagation of a purely electrostatic perturbation mode on a time scale of the ion-acoustic waves. Thus, the frequency (ra) of the perturbation mode is much higher than the dust plasma frequency (®pd), i.e. ®pd < ® (viz. for typical laboratory dusty plasma parameters [10, 59], ra is of the order of hundred kHz, whereas ®pd is of the order of 10 Hz). Therefore, dust grains are assumed to be stationary as it is considered by many authors [59— 63]. We note that in the DIA wave mode the kinetic treatment of the dust particles is not important since the dust particles are extremely massive in contrast to ion mass. We have assumed constant dust charge, i.e. neglected the dust charge fluctuation. However, the dust charge fluctuation is important only when the dust charging time period (Tch) is comparable to the DIA wave time period (Tw). Thus, our present theory is valid when Tch is not comparable to Tw.

The nonlinear dynamics of the DIA waves, whose phase speed is much smaller (larger) than electron (ion) thermal speed, in a nonplanar geometry is governed by