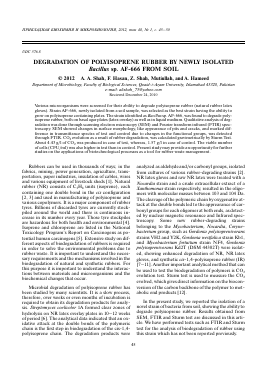 Various microorganisms were screened for their ability to degrade polyisoprene rubber (natural rubber latex gloves). Strain AF-666, newly isolated from a soil sample, was selected as the best strain having the ability to grow on polyisoprene containing plates. The strain identified as Bacillus sp. AF-666, was found to degrade polyisoprene rubber, both on basal agar plates (latex overlay) as well as in liquid medium. Qualitative analysis of degradation was done through scanning electron microscopy (SEM) and Fourier transform infrared (FTIR) spectroscopy. SEM showed changes in surface morphology, like appearance of pits and cracks, and marked difference in transmittance spectra of test and control due to changes in the functional groups, was detected through FTIR. CO2 evolution as a result of rubber degradation, was calculated gravimetrically by Sturm Test. About 4.43 g/l of CO2 was produced in case of test, whereas, 1.57 g/l in case of control. The viable number of cells (CFU/ml) was also higher in test than in control. Present study may provide an opportunity for further studies on the applications of biotechnological processes as a tool for rubber waste management.

Rubbers can be used in thousands of ways; in the fabrics, mining, power generation, agriculture, transportation, paper industries, insulation of cables, wires and various equipment of livestock sheds [1]. Natural rubber (NR) consists of C5H8 units (isoprene), each containing one double bond in the cis configuration [2, 3] and used in manufacturing of polyisoprene and various copolymers. It is a major component of rubber tyres. Billions of discarded tyres are currently stockpiled around the world and there is continuous increase in its number every year. Those tyre stockpiles are hazardous for both health and environmental [4]. Isoprene and chloroprene are listed in the National Toxicology Program's Report on Carcinogens as potential human carcinogens [5]. Extensive study on different aspects of biodegradation of rubbers is required in order to solve the environmental problems due to rubber waste. It is important to understand the necessary requirements and the mechanisms involved in the biodegradation of natural and synthetic rubbers. For this purpose it is important to understand the interactions between materials and microorganisms and the biochemical changes that occur.

Microbial degradation of polyisoprene rubber has been studied by many scientists. It is a slow process, therefore, over weeks or even months of incubation is required to obtain its degradation products for analysis. Streptomyces coelicolor 1A formed clear zones of hydrolysis on NR latex overlay plates in 10—12 weeks of period [6]. The analytical data indicated that an ox-idative attack at the double bonds of the polymeric chain is the first step in biodegradation of the cis-1,4-polyisoprene chain. The degradation products were

analyzed as aldehyde and/or carbonyl groups, isolated from cultures of various rubber-degrading strains [2]. NR latex gloves and raw NR latex were treated with a Nocardia strain and a crude extracellular extract of a Xanthomonas strain respectively, resulted in the oligomers with molecular masses between 103 and 104 Da. The cleavage of the polymeric chain by oxygenative attack at the double bonds led to the apprearance of carbonyl groups for each oligomer at both ends, as detected by nuclear magnetic resonance and Infrared spectroscopy. Some new rubber-degrading strains belonging to the Mycobacterium, Nocardia, Coryne-bacterium group, such as Gordonia polyisoprenivorans strains VH2 and Y2K, Gordonia westfalica strain Kb1, and Mycobacterium fortuitum strain NF4, Gordonia polyisoprenivorans Kd2T (DSM 44302T) were isolated, showing enhanced degradation of NR, NR latex gloves, and synthetic cis-1,4-polyisoprene rubber (IR) [7—11]. Another important analytical method that can be used to test the biodegradation of polymers is CO2 evolution test. Sturm test is used to measure the CO2 evolved, which gives direct information on the bioconversion of the carbon backbone of the polymer to metabolic end products [12].

In the present study, we reported the isolation of a novel strain of bacteria from soil, showing the ability to degrade polyisoprene rubber. Results obtained from SEM, FTIR and Sturm test are discussed in this article. We have performed tests such as FTIR and Sturm test for the analysis of biodegradation of rubber using this strain which has not been reported previously.

3100 DNA sequencer (PE Applied Biosystems, UK). The sequence was read using DNASIS and FinchTV. The complete sequence was compared with other 16S rRNA gene sequences using the BLASTN program in NCBI GenBank database. The sequence of strain AF-666 was deposited in GenBank under accession number FJ481932.

Analysis of biodegradation. Plate assay. In this case the degradation of NR latex concentrate by strain AF-666 was checked through plate assay. For this purpose, NR latex overlay plates were prepared by spreading 20 mg of latex concentrate solubilized in n-hexane, and then spread as thin film on mineral agar plates. The solvent was allowed to evaporate. The plates were inoculated with AF-666 and incubated at 37°C.

Growth conditions. NR latex glove pieces (1 g) were added to a 250 ml Erlenmeyer flask containing 100 ml of the mineral salt medium and inoculated with 5% (v/v) inoculum (Strain AF-666 was prepared in tryptic soya broth at 37°C and 150 rpm for 48 h). The flask was incubated at 37°C at 150 rpm for 3 weeks. The experiment was performed in triplicate. The inoculated mineral medium without latex glove pieces was used as control. The growth of the strain AF-666 was checked at the end of incubation, by measuring its OD600 through spectrophotometer.

Scanning electron microscopy (SEM).The surface topology of the NR latex glove pieces was analyzed through scanning electron microscopy (LEO 440i, Leica, Bensheim, Germany) after culturing incubating in mineral salt medium with strain AF-666 for 3 weeks, to check for any structural changes. The washed pieces of NR latex glove were mounted on the aluminium stubs by silver coating under vacuum by evaporation in order to make the samples conducting. The images of the test (treated) and control (untreated) samples were compared.

Fourier transform infrared spectroscopy (FTIR). FTIR (FTX 3000 MX Bio Rad Ex-CliburTm FTIR Series, USA) analysis was done to detect the degradation of NR latex glove after culturing in mineral salt medium, on the basis of changes in the functional groups. The correlation of absorption bands in the spectrum of an unknown compound with the known absorption frequencies was analyzed. The polymer pieces were mixed with KBr and made into a pellet, which was fixed to the FTIR sample plate. Spectra were taken in triplicate at 400 to 4000 wave-numbers cm-1 for each sample.