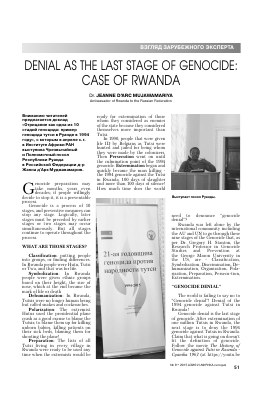 DENIAL AS THE LAST STAGE OF GENOCIDE

Am^ssador of Rwanda to the Russian Federation

Genocide preparation may take months, years even decades; if people willingly decide to stop it, it is a preventable process.

Genocide is a process of 10 stages, and preventive measures can stop any stage. Logically, later stages must be preceded by earlier stages or two stages may occur simultaneously. But all stages continue to operate throughout the process.

WHAT ARE THOSE STAGES?

In 1990, people that were given life ID by Belgians as Tutsi were hunted and jailed for being whom they were made by the colonizers. Then Persecution went on until the culmination point of the 1994 genocide. Extermination began and quickly became the mass killing -the 1994 genocide against the Tutsi in Rwanda. 100 days of slaughter and more than 100 days of silence! How much time does the world

Classification: putting people into groups, or finding differences. In Rwanda people were Hutu, Tutsi or Twa, and that was for life.

eople were given ethnic groups ased on their height, the size of nose, which at the end became the mark of life or death

Dehumanization: In Rwanda, Tutsis were no longer human being but called snakes and cockroaches.

Polarization: The extremist Hutus used the presidential plane crash as a good excuse to blame the Tutsis; to blame them up for killing unborn babies, killing patients on their sick beds, blaming them for shooting the plane!

Preparation: The lists of all Tutsi living in every village in Rwanda were ready to be used any time when the extremists would be

Rwanda was left alone by the international community including the AU and UN to go through these nine stages of the Genocide that, as per Dr. Gregory H. Stanton, the Research Professor in Genocide Studies and Prevention at the George Mason University in the US, are - Classification, Symbolization, Discrimination, De-humanization, Organization, Polarization, Preparation, Persecu-tion, Extermination.

The world is failing to say no to "Genocide denial"! Denial of the 1994 genocide against Tutsi in Rwanda!

responsibility to remain committed to the "Never again" cause, for the good of humankind.

Kwibuka means 'remember' in Kinyarwanda, the Rwandan language. Today this word is used as the name for the annual commemoration of the 1994 Genocide against the Tutsi. 2015 marks 21 years since the genocide in Rwanda. Kwibuka 21 recalls on the global community to stand together against genocide in three key ways:

- Remember: Honoring the memory of those who died and offering support to those who survived.

/dSyKG_7RmBE) and you will understand when did the genocide denial started and why.

The 12-step tactics of denial of Genocide is outlined by Israel Charny, an Israeli psychologist and genocide scholar, in "Templates for Gross Denial of a Known Genocide: A Manual" that can be found in The Encyclopedia of Genocide (volume 1, page 168).

Questioning and minimizing the statistics of victims of the 1994 genocide against the Tutsi is one way of denying it.

People do play with numbers as if one person does not count for Rwanda! Genocide Convention of 1948 does not cite any numbers! Blame the victims: recently, BBC Two aired a movie transforming the victims into culprits!

Babysitting the genocide deniers and perpetrators in different cities of the world, especially in Europe, North America and Africa is another form of genocide denial and denying justice to victims.

Without prosecuting those who committed genocide and those who deny genocide, an expectation of impunity is created and "never again" has no meaning.

As Helen Fein, Professor of historical sociology specialized on genocide, human rights, and collective violence and the Executive Director of the Institute for the Study of Genocide in New York, and Barbara Harff, Professor

of Political Science at the U.S. Naval Academy in Annapolis have shown, "one of the best predictors of future genocide is previous genocide that has gone unpunished. Without trials, denial becomes permanent."

The UN should take stronger measures to further mechanisms to condemn the Tutsi genocide denial as it did for those denying Holocaust in its resolution A/RES/61/255 of January 26, 2007.

We request that any attempt to deny genocide against the Tutsi in Rwanda shall be dealt seriously if we really want to prevent further genocides.

It is therefore the primary

- Unite: Rwanda shows that reconciliation through shared human values is possible, and asks the world to do the same.

- Renew: «Remembering our lost ones gives us strength and motivation for working hard and demands of us assuming our duties and theirs.

We may remember their names, their numbers, what their liked, but we will never know what were their projects; what we surely know, they wanted a better Rwanda; a world worth living in; let it be everyone's responsibility to speak louder about the 1994 genocide against the Tutsi and fight the denial in all its forms and be the messengers of peace and harmony worldwide.