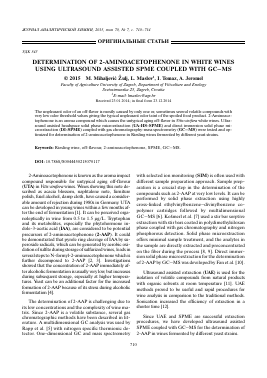 2-Aminoacetophenone is known as the aroma impact compound responsible for untypical aging off-flavour (UTA) in Vitis vinifera wines. Wines showing this note described as acacia blossom, naphtalene note, furniture polish, fusel alcohol, damp cloth, have caused a considerable amount of rejection during 1980s in Germany. UTA can be developed in young wines within a few months after the end of fermentation [1]. It can be perceived orga-noleptically in wine from 0.5 to 1.5 ^g/L. Tryptophan and its metabolites, especially the phytohormone in-dole-3-acetic acid (IAA), are considered to be potential precursors of 2-aminoacetophenone (2-AAP). It could be demonstrated that pyrole ring cleavage of IAA by superoxide radicals, which can be generated by aerobic oxidation ofsulfite during storage of sufurized wines, leads in several steps to N-formyl-2-aminoacetophenone which is further decomposed to 2-AAP [2, 3]. Investigations showed that the concentration of 2-AAP immediately after alcoholic fermentation is usually very low, but increases during subsequent storage, especially at higher temperatures. Yeast can be an additional factor for the increased formation of 2-AAP because of its stress during alcoholic fermentation [4].

The determination of 2-AAP is challenging due to its low concentrations and the complexity ofwine matrix. Since 2-AAP is a volatile substance, several gas chromatographic methods have been described in literature. A multidimensional GC analysis was used by Rapp et al. [5] with nitrogen specific thermionic detector. One-dimensional GC and mass spectrometry

with selected ion monitoring (SIM) is often used with different sample preparation approach. Sample preparation is a crucial step in the determination of the compounds such as 2-AAP at very low levels. It can be performed by solid phase extraction using highly cross-linked ethylvinylbenzene—divinylbenzene co-polymer cartridges followed by multidimensional GC—MS [6]. Kosmerl et al. [7] used a stir bar sorptive extraction with stir bars coated in polydimethylsiloxan phase coupled with gas chromatography and nitrogen phosphorous detection. Solid phase microextraction offers minimal sample treatment, and the analytes in the sample are directly extracted and preconcentrated on the fiber during the process [8, 9]. Direct immersion solid phase microextraction for the determination of 2-AAP by GC-MS was developed by Fan et al. [10].

Ultrasound assisted extraction (UAE) is used for the isolation of volatile compounds from natural products with organic solvents at room temperature [11]. UAE methods proved to be useful and rapid procedures for wine analysis in comparison to the traditional methods. Sonication increased the efficiency of extraction in a shorter time [12].

Since UAE and SPME are successful extraction procedures, we have developed ultrasound assisted SPME coupled with GC—MS for the determination of 2-AAP in wines fermented by different yeast strains.

Chemicals and reagents. 2-Aminoacetophenone (>98%) was purchased from Sigma-Aldrich (St. Louis, USA), 2-nitroacetophenone was from Merck (Darmstadt, Germany). Ethanol 96% and NaCl were purchased from Kemika (Zagreb, Croatia), L-tartaric acid was from Riedel de-Haën (Seelze, Germany). All reagents and chemicals used in this work were of analytical grade. SPME syringe, divinylbenzene/carboxen/polydimethyl-siloxane (DVB/CAR/PDMS) 50/30 |am, 2 cm, fibers were from Supelco (Bellefonte, USA). Synthetic wine was prepared by 3.5 g ofL-tartaric acid dissolved in 1 L of 12% ethanol and pH was adjusted to 3.5 with 1 M NaOH.

Wine samples. The experiment was conducted in year 2009 on grapes Vitis vinifera cv. Rhein Riesling at the experimental vineyard and cellar of Faculty of Agriculture in Zagreb. The grapes undergo traditional vinification for white wines. Grape juice was put in stainless-steel tank for settling with addition of free SO2 adjusted to 50 mg/L. Clear grape juice was separated in 10 L glass bottles and inoculated with four different commercial yeast strains: Uvaferm CEG (Saccharomyces cer-evisiae), Lalvin Cross Evolution (Saccharomyces cerevisi-ae), Anchor VIN 13 (Saccharomyces cerevisiae hybrid), Anchor Exotics SPH (Saccharomyces cerevisiae x Sac-charomyces paradoxus hybrid), all obtained from Lalle-mand (Montreal, Canada). Each fermentation was conducted with addition of 0.3 g/L ammonium sulfate as nutrient and without it. Fermentations were carried out in controlled environment at 158°C. After fermentation the samples were racked from lees and sulphurized with SO2 to 50 mg/L. Samples were taken for analysis after two months of storage at 15°C in wine cellar.

The procedure of direct immersion SPME. For each DI-SPME analysis, 15 mL ofwine and 3 g of NaCl spiked with 1 ^g/L of 2-nitroacetophenone as internal standard were placed into 15 mL vials and tightly capped with poly-tetrafluoroethylene—silicon septum. After equilibration at 30°C for 5 min with stirring at 800 rpm, the SPME fiber was exposed to the sample for 45 min, removed and inserted to GC-injection port.

The procedure of ultrasound assisted headspace SPME. SPME fiber was introduced into the sample vial via silicone-rubber septum cap and exposed to the headspace of vial containing 10 mL wine, 35% NaCl and 1 ^g/L 2-nitroacetophenone as internal standard. The vial and fiber were placed in an ultrasound bath for 15 min at 50°C, so that only the sample was exposed to ultrasound field of 35 kHz. After extraction, the fiber was introduced into the GC-injector.

1 mL/min constant flow. The oven temperature program was 40°C for 2 min, raised to 250°C at a rate of 6 grad/min and maintained for a futher 10 min. Separation was achieved on a fused silica capillary column (ZB-5ms Phenomenex, USA), length 30 m with 0.25 mm internal diameter and 0.25 ^m film thickness. Injector temperature was 230°C. Desorption was made in split-less mode using 0.75 mm i.d. liner. The mass spectrometer was operated in the electron impact mode with following conditions: transfer line was 280°C, voltage was 70 eV and solvent delay was 6 min. The source temperature of 230°C and quadrupole temperature of 150°C were selected. Compounds were measured in the SIM-mode wtih different time windows. The following m/z ratios were monitored: 2-AAP, m/z 120 (target ion)/135 and 2-nitroacetophenone (internal standard), 150 (target ion)/165.

Optimization of the SPME parameters. All optimization experiments (amount of NaCl to be added to assist evaporation, eqilibration time, extraction time and temperature) were performed with a white wine Riesling vintage 2008 spiked with 2-aminoacetophenone. Optimum parameters for determination of 2-AAP were determined in separate experiments. All expriments were done in triplicate.

Ultrasound assisted headspace solid phase microextraction. Salt addition increases extraction efficiency significantly for polar and volatile compounds. Thus, the influence of NaCl concentration in solution was studied using different amounts of NaCl ranged between 0—35%. Ten milliliters ofwine was pippeted into four separate SPME-vials containing 0, 1, 2 and 3.5 g of NaCl and 2 ^g/L of 2-AAP. Figure 1a illustrates that the addition of 3.5 g of NaCl to wine samples gives rise to the greatest chromatographic response. The effect of the extraction time of ultrasound assisted solid phase microextraction has also been evaluated. Different times in the range between 2 and 30 min were assayed by putting fiber to headspace of 10 mL wine sample solution containing 2 ^g/L of 2-AAP saturated with 35% of NaCl. 15 min of extraction (Fig. 1b) were required for obtaining optimum chromatograms, whereas both shorter and longer extraction periods resulted in lower peak heights. These results can be explained by the kinetics of extraction. At the inital period, the greatest amount of analyte is extracted per time, and the graph rises sharply and has the greatest slope, and finally, under ideal conditions the equilibrium is reached such that the plot becomes a plateau. After 15 min of sonication 2-AAP in wine has probably degraded. The influence of the extraction temperature was investigated by heating the vials containing 2 ^g/L of 2-AAP and 3 g of NaCl at 35, 50, 60°C and without