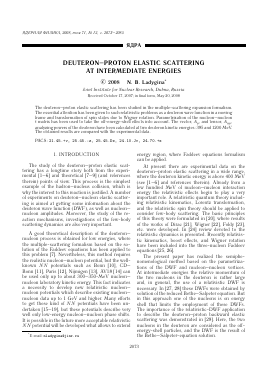 The deuteron—proton elastic scattering has been studied in the multiple-scattering expansion formalism. The essential attention has been given to such relativistic problems as a deuteron wave function in a moving frame and transformation of spin states due to Wigner rotation. Parametrization of the nucleon—nucleon t matrix has been used to take the off-energy-shell effects into account. The vector, Ay, and tensor, Ayy, analyzing powers of the deuteron have been calculated at two deuteron kinetic energies: 395 and 1200 MeV. The obtained results are compared with the experimental data.

The study of the deuteron—proton elastic scattering has a longtime story both from the experimental [1—6] and theoretical [7—9] (and references therein) points of view. This process is the simplest example of the hadron—nucleus collision, which is why the interest to this reaction is justified. A number of experiments on deuteron—nucleon elastic scattering is aimed at getting some information about the deuteron wave function (DWF), as well as nucleon— nucleon amplitudes. Moreover, the study of the reaction mechanisms, investigations of the few-body scattering dynamics are also very important.

A good theoretical description of the deuteron— nucleon process is obtained for low energies, where the multiple-scattering formalism based on the solution of the Faddeev equations has been applied to this problem [7]. Nevertheless, this method requires the realistic nucleon—nucleon potential, but the well-known NN potentials such as Bonn [10], CD-Bonn [11], Paris [12], Nijmigen [13], AV18 [14] can be used only up to about 300-350-MeV nucleon-nucleon laboratory kinetic energy. This fact indicates a necessity to develop new relativistic nucleon-nucleon potentials which describe existing nucleon-nucleon data up to 1 GeV and higher. Many efforts to get these kind of NN potentials have been undertaken [15-19], but these potentials describe very well only low-energy nucleon—nucleon phase shifts. It is possible in the future more acceptable relativistic NN potential will be developed what allows to extend

energy region, where Faddeev equations formalism can be applied.

At present there are experimental data on the deuteron-proton elastic scattering in a wide range, where the deuteron kinetic energy is above 400 MeV (see [1 -6] and references therein). Already from a few hundred MeV of nucleon-nucleon interaction energy the relativistic effects begin to play a very important role. A relativistic quantum theory including relativistic kinematics, Lorentz transformation, and the relativistic spin theory should be applied to consider few-body scattering. The basic principles of this theory were formulated in [20], where results of the works of Dirac [21], Wigner [22], Foldy [23], etc. were developed. In [24] review devoted to the relativistic dynamics is presented. Recently relativis-tic kinematics, boost effects, and Wigner rotation have been included into the three-nucleon Faddeev equations [25, 26].

The present paper has realized the semiphe-nomenological method based on the parametriza-tions of the DWF and nucleon—nucleon vertices. At intermediate energies the relative momentum of the two nucleons in the deuteron is rather large and, in general, the use of a relativistic DWF is necessary. In [27, 28] these DWFs were obtained by solution of the reduced Bethe—Salpeter equation. But in this approach one of the nucleons is on energy shell that limits the employment of these DWFs. The importance of the relativistic-DWF application to describe the deuteron—proton backward elastic scattering was demonstrated in [29]. Here, the two nucleons in the deuteron are considered as the off-energy-shell particles, and the DWF is the result of the Bethe—Salpeter-equation solution.

However, at the energies considered in the present paper it is possible to use nonrelativistic DWF such as Paris [30], Bonn [10], CD—Bonn [11] due to transition into the deuteron Breit frame. It allows one to decrease the two-nucleon relative momentum both in the initial and final deuterons. In this paper the CD-Bonn DWF has been used as a more modern one. It should be noted that the Lorentz transformation and relativistic spin theory have been applied to describe the transformation from the deuteron rest frame to the Breit system. As a result, the DWF has a more complicated spin structure than usual nonrelativistic one and depends on the two variables. The analogous result was obtained in [31-33] for the DWF on the light front.

The model offered in [8] to investigate the deuteron-proton elastic scattering at intermediate energies has been developed further in the present paper. First of all, the DWF transformation has been done. Secondly, the phase-shift-analysis data are not used to describe the nucleon-nucleon interaction in comparison with [8], where the energy dependence in nucleon-nucleon vertices, important for correct integrations, is lost. Besides, the phase-shift analysis gives information about on-energy-shell nucleons. But in our method the off-energy-shell effects have to be taken into consideration, and it can be done by using some parametrization describing the nucleon-nucleon interaction. Thus, the nucleon-nucleon t matrix constructed by Love and Franey [34] has been used in our calculations.

The presented method has been applied to calculate the two simplest polarization observables: vector, Ay, and tensor, Ayy, analyzing powers at two deuteron kinetic energies: 395 and 1200 MeV. The results of these calculations are compared with the experimental data obtained in Saclay [1, 2] and Argonne [3]. It should be noted that these observables and energies are examples of the presented-method employment. In the future this method is planned to describe other polarization observables at deuteron kinetic energies between 400 and 1200 MeV.

The paper is organized as follows. Section 2 gives the general formalism: the transformation of the DWF from the rest frame to a moving deuteron system is considered; the description of the nucleon-nucleon interaction is presented; the calculations of the scattering-amplitude terms are performed. Section 3 defines the polarization observables, Ay and Ayy. The results of the calculations are discussed in Section 4. The conclusions are contained in Section 5.

According to the three-body collision theory, the amplitude of the deuteron-proton elastic scattering,

J, is defined by the matrix element of the transition operator Un :

Here, the state |1(23)> corresponds to the configuration, when nucleons 2 and 3 form the deuteron state and nucleon 1 is free. Appearance of the permutation operators for two nucleons Pij reflects the fact that the initial and final states are antisymmetric due to exchange of the two particles.

The transition operators for rearrangement scattering are defined by the Alt—Grassberger—Sandhas equations [35, 36]

where t1 = t(2,3) etc. is the t matrix of the two-nucleon interaction and g0 is the free three-particle propagator. The indices ij for the transition operators Uij denote free particles i and j in the final and initial states, respectively.

Iterating these equations up to the ti second-order terms we can present the reaction amplitude as a sum of the following three contributions: one-nucleon exchange, single-scattering and double-scattering terms:

where we have introduced notations for antisym-metrized operators t2ym = [1 — P13]t2 and t3ym = [1 — — P12]t3. Before we consider each of these elements in detail, we must determine the reference frame.

The most popular DWFs are well known only in the nonrelativistic region. In this connection it is very important to choose the frame, where the application of the nonrelativistic DWF is possible. The frame, which minimizes the relative momenta of the nucleons in the both DWFs, is the deuteron Breit system. In this frame the deuterons move in opposite directions with equal momenta (Fig. 1). As a consequence, the energies of the initial and final deuterons (and protons) are equal to each other.

We take the orthonormal basis

In order to get the wave function of the moving deuteron, let us consider an arbitrary frame, where two nucleons have momenta pi, p2 and en-

ergies Ei = ym2N + p|, E2 = y m2N + p2, respectively. Here, mN is the nucleon mass. These momenta are related with those in the center of mass (c.m.) by Lorenz transformation:

Here, the c.m. energy of one of the nucleons E* is related with Mandelstam variable s by