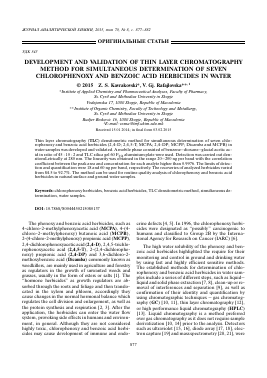 Thin layer chromatography (TLC) densitometric method for simultaneous determination of seven chlo-rophenoxy and benzoic acid herbicides (2,4-D; 2,4,5-T; MCPA; 2,4-DP; MCPP; Dicamba and MCPB) in water samples was developed and validated. A mobile phase consisted of benzene—dioxane—glacial acetic acid in ratio of 45 : 10 : 2 and TLC silica gel 60 F254 aluminium plate were used. Detection was carried out den-sitomLetrically at 280 nm. The linearity was obtained in the range 20—200 ng per band with the correlation coefficient between the peak area and concentration for each analyte higher than 0.9976. The limits of detection and quantification were 18 and 60 ng per band, respectively. The recoveries of analyzed herbicides varied from 84.5 to 92.7%. The method can be used for routine quality analysis of chlorophenoxy and benzoic acid herbicides in natural surface and ground water samples.

The phenoxy and benzoic acid herbicides, such as 4-chloro-2-methylphenoxyacetic acid (MCPA), 4-(4-chloro-2-methylphenoxy) butanoic acid (MCPB), 2-(4-chloro-2-methylphenoxy) propionic acid (MCPP), 2,4-dichlorophenoxyacetic acid (2,4-D), 2,4,5-trichlo-rophenoxyacetic acid (2,4,5-T), 2-(2,4-dichlorophe-noxy) propionic acid (2,4-DP) and 3,6-dichloro-2-methoxybenzoic acid (Dicamba) commonly known as weedkillers, are mainly used in agriculture and forestry as regulators in the growth of unwanted weeds and grasses, usually in the form of esters or salts [1]. The "hormone herbicides" as growth regulators are absorbed through the roots and foliage and then translocated in the xylem and phloem, accordingly they cause changes in the normal hormonal balance which regulates the cell division and enlargement, as well as the protein synthesis and respiration [2, 3]. After the application, the herbicides can enter the water flow system, provoking side effects in humans and environment, in general. Although they are not considered highly toxic, chlorophenoxy and benzoic acid herbicides may cause development of immune and endo-

crine defects [4, 5]. In 1996, the chlorophenoxy herbicides were designated as "possibly" carcinogenic to humans and classified to Group 2B by the International Agency for Research on Cancer (IARC) [6].

The high water solubility of the phenoxy and benzoic acid herbicides highlighted the require for their monitoring and control in ground and drinking water by using fast and highly efficient sensitive methods. The established methods for determination of chlo-rophenoxy and benzoic acid herbicides in water samples include a series of different steps, such as liquidliquid and solid phase extraction [7, 8], clean-up or removal of interferences and separation [9], as well as confirmation of their identity and quantification by using chromatographic techniques - gas chromatog-raphy (GC) [10, 11], thin layer chromatography [12], or high performance liquid chromatography (HPLC) [13]. Liquid chromatography is a method preferred over gas chromatography as it does not require sample derivatization [10, 14] prior to the analysis. Detectors such as ultraviolet [15, 16], diode array [17, 18], electron capture [19] and mass spectrometry [20, 21], were

used. However, a few published data could be found for thin layer stationary phases used in the determination of herbicides in water samples [22, 23]. Modern thin layer chromatography is an instrumental technique that is comparable by its accuracy and precision with both HPLC and GC, so it became applicable for monitoring of the environmental conditions. In comparison with HPLC, TLC has several advantages: it is simple and fast, requires little or no sample preparation and cleanup, it is easy to perform, several samples can be run simultaneously using a small quantity of mobile phase, unlike HPLC, thus reducing time and cost of analysis [24, 25].

The aim of this study is to establish and validate a simple, accurate and reproducible TLC procedure for monitoring and simultaneous determination of selected chlorophenoxy and benzoic acid herbicides in natural surface and ground water samples, as an alternative to GC and HPLC for pesticide residue analyses.

Reagents. Proanalysis-grade solvents: benzene, di-oxane, glacial acetic acid and acetone were supplied from commercial sources. Acetonitrile and sodium acetate were purchased from Merck (Germany). Ben-zoic acid analytical standard grade purchased from Sigma Aldrich (USA) was used as internal standard. Standards of the herbicides with purity higher than 99.0%, i.e. 2,4-D, 2,4-DP, 2,4,5-T, MCPA, MCPB, MCPP and Dicamba, were purchased from Ciba-Gei-gy Canada Ltd. (Greensboro, NC). Individual stock solutions of the herbicide standards with the concentration of 1.0 mg/mL were prepared in acetonitrile. It was determined that they were stable for at least 4 weeks and 6 months during storage at 4° C in refrigerator and at —20°C in freezer, respectively. The working solutions with the concentration of 0.2—20 mg/L were daily prepared by serial dilutions with acetonitrile from stock herbicide solutions.

Preparation of water samples. Sep-Pak C18 classic cartridges (1 mL) produced by Waters Associates (Mil-ford, USA) were used during solid phase extraction. C18 cartridges were pre-conditioned with 1 mL acetone, 1 mL acetonitrile and 2 mL deionized water. Aqueous samples were fortified by adding aliquots of working standard solutions of herbicides. After adjusting the pH value to 2.5 using sulfuric acid diluted in water (1 : 1), the water samples were passed through the cartridges at a flow rate of 3—5 mL/min. Acetonitrile (1 mL) was used for the elution of the cartridge. The samples were dried under a gentle nitrogen stream and then reconstituted in 100 ^L acetonitrile.

standard working solutions alongside with the treated water samples (10 ^L) were spotted with a constant application rate (50 nL/s) as bands on the TLC plate in a distance of 10 mm from lower edge, 15 mm from side edge and 15 mm space between two bands. Linear ascending development was performed in a glass chamber saturated 15 min with the mobile phase consisted of benzene—dioxane—glacial acetic acid (45 : 10 : 2) at room temperature. The plates were developed up to a distance of10 cm for 30 min at 25°C and subsequently air dried at room temperature or rapidly dried with the hair dryer. The bands were visualized by immersion of the TLC plate in 4% chromotropic acid in 20% sulfuric acid solution and heated for 15 min at 160°C. Densitometric analysis was carried out with a Camag TLC Scanner 3 in the absorbance mode at 280 nm. The plates were scanned at 20 mm/s scanning speed.

TLC densitometric method validation. Validation of the optimized TLC method was performed in terms of the following parameters: linearity and range, precision, accuracy, limit of detection (LOD) and limit of quantification (LOQ), and robustness.

Linearity and range. Aliquots of 10 ^L of each working standard solution were spotted in triplicate on a TLC plate to obtain a final concentration of 20—200 ng per band and developed in conditions established in the method optimization, i.e. plate type and mobile phase (benzene—dioxane—glacial acetic acid 45 : 10 : 2). The calibration curves were constructed by plotting the peak area versus the corresponding concentration of chlorophenoxy and benzoic acid herbicides.

Precision. The repeatability of the method assessed by analysis of the 200 ng per band of standard solution

of investigated herbicides (n = 3) was expressed as relative standard deviation (RSD, %) and standard error of the peak area